Obama Spreading Ebola in US By Refusing A Travel Ban 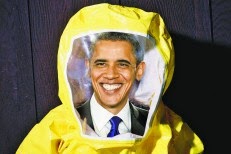 Lawmakers this week urged Obama to bar people from Liberia, Sierra Leone and Guinea from entering the United States. Obama has said he is not philosophically opposed to travel bans, but in his weekly address made it clear that he is not leaning toward them.

“We can’t just cut ourselves off from West Africa,” Obama said, explaining it would make it harder to move health workers and supplies into the region, and would motivate people trying to get out the region to evade screening, making it harder to track cases.


“Trying to seal off an entire region of the world – if that were even possible – could actually make the situation worse,” he said. Obama said it would take time to fight the disease, warning “before this is over, we may see more isolated cases here in America.”

But he sought to put the disease in perspective, reminding Americans that only three cases have been diagnosed in the country, and that it is not easily contracted. “What we’re seeing now is not an ‘outbreak’ or an ‘epidemic’ of Ebola in America,” he said. “This is a serious disease, but we can’t be given in to hysteria or fear.” 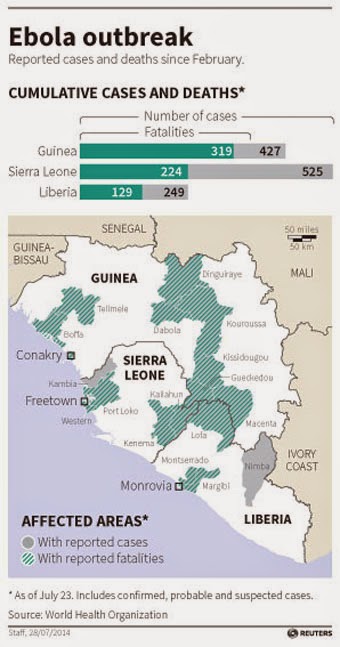 Banning travel from Ebola-stricken West African countries could keep the deadly virus from spreading in the United States, say critics of President Obama’s claim that such a ban would only make the outbreak worse.

Travel bans are already working in several African countries, said Dr. Gerald Weissmann, a professor at the NYU Langone Medical Center. “There are no cases now” in the countries where bans are in effect, he noted.

Obama restated his opposition Saturday, arguing a ban “would make it harder to move health workers and supplies back and forth” and cause people who might be carrying the disease “to evade screening and make the disease even harder to track.”

“We can’t just cut ourselves off from West Africa,” he said in his weekly address. He is under mounting pressure to impose a travel ban. Eighty-three lawmakers — 72 Republicans and 11 Democrats — favor a ban, The Hill Web site reported.

Obama should “deny entry” to people traveling from Ebola-stricken countries and impose “a period of quarantine” on those suspected of being exposed to the disease, said Rep. Tom Price (R-Ga.), a physician.

Weissmann noted that quarantines and travel bans helped curb cholera outbreaks in New York in the mid-19th century. “We quarantined people when they came off ships that had cholera,” he said. “We had tough quarantine laws and tough ­inspections” at entry points.

David Dausey, dean of the School of Health Professions and Public Health at Mercyhurst University in Erie, Pa., also urged a travel ban. “Common-sense epidemiology is that you keep sick people away from well people,” he said.

Commercial airlines are ill-equipped to deal with the crisis, Dausey said. He believes commercial flights should end, with military flights and aid increased. “If we do not do this now, we are going to lose this, and this disease is going to become something which is just as regular as HIV/AIDS,” he said.

Jamaica and St. Lucia have banned travel from West Africa, and Haiti is no longer welcoming UN peacekeepers from Africa. The White House next week will ask Congress for more money to fight the outbreak. Several GOP members have said they would support such a move.

In his address, Obama sought to reassure the public. “I’ve met with an Ebola patient who recovered, right in the Oval Office,” he said. “And I’m fine.” 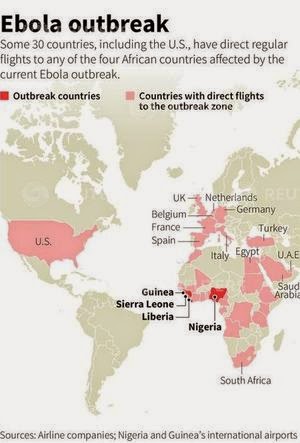 Wanted: Ebola screeners at JFK for $19 an hour

They’re looking for the few, the proud — and the really desperate.

For a measly $19 an hour, a government contractor is offering applicants the opportunity to get up close and personal with potential Ebola patients at JFK Airport — including taking their temperatures.

Angel Staffing Inc. is hiring brave souls with basic EMT or paramedic training to assist Customs and Border Protection officers and the Centers for Disease Control and Prevention in identifying possible victims at Terminal 4, where amped-up Ebola screening started on Saturday. 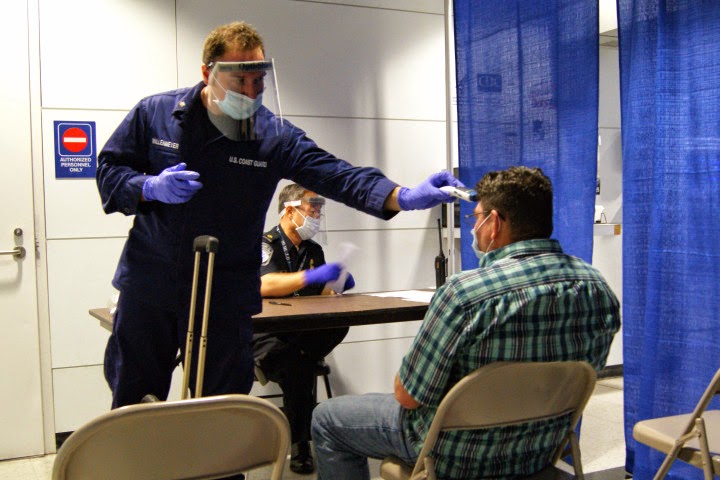 EMTs will earn just $19 an hour, while paramedics will pocket $29. Everyone must be registered with the National Registry of Emergency Medical Technicians. The medical staffing agency is also selecting screeners to work at Washington Dulles, Newark Liberty, Chicago O’Hare and Hartsfield-Jackson Atlanta international airports.

“Wow, that’s really scary . . . Be safe everybody,” Facebook user Jaclyn Namer wrote under a posting for the job. Others were a little more eager to lend a hand. “I can help on weekends in Chicago,” Jeremy Voris volunteered on Facebook.

As part of the new screening process, travellers arriving from Sierra Leone, Guinea and Liberia must answer questions upon arrival, then have their temperatures taken with no-touch thermometers, CDC Director Thomas Frieden announced last week.

Airport screeners will be expected to take the temperatures of incoming passengers. Coast Guard corpsmen with EMT training are also being recruited for the risky screening gig, a source said.

About 150 people travel from or through the three Ebola-afflicted countries to the US every day, customs officials said. Most of them land at JFK, where officers fear catching the deadly disease. 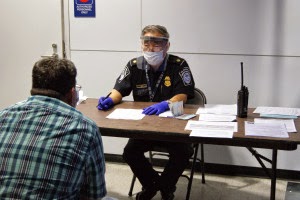 “We were told what to do for a passenger, but what happens with us? What if I get a fever? What should I do?” one officer said. The officer was also troubled by possible flaws in the screening plan. “For example, if someone has 108 fever and we catch it after they deplane, there were 132 other people on the plane with him and you just let them go,” he said. “You just possibly contaminated the person next to you and the flight attendant who handed you something.”

Meanwhile, a law-enforcement official at JFK was outraged over the handling of a plane carrying a man from Nigeria who died following an onboard vomiting fit. The door to the jet was already open when first responders showed up.

Even though Ebola isn’t airborne, the official insisted it could have been a potential health threat. “We don’t know if anybody bolted from that plane or if the inside of the door is contaminated,” he said.

Chalk it up to karma, fate or bad luck. Whatever you call it, the Ebola scare is proof that Bad Things Happen to Bad Presidents.

The morphing of what is a single case into near panic is, according to medical experts, unwarranted. They point out that, so far, one person from Liberia died in a Texas hospital and two nurses who treated him got sick. Period, end of panic.

In rational and medical terms, they may be right. But their calculations omit another factor. It’s the X factor. In this case, X stands for trust. President Obama has spent six years squandering it, and the administration’s confusion, contradictions and mistakes on Ebola fit the pattern. This is how he rolls.

Don’t worry, there’s no chance of an outbreak, they said. Then it was, Oops, we must rethink all procedures for handling cases. Then there was no worry about a “wide” outbreak, yet quarantines for lots of people.

The irrational fear of an alien pathogen is fuelled by rational suspicion of an incompetent and dishonest government. How did the so-called experts at the Centers for Disease Control and Prevention give Nurse No. 2 permission to travel by air, even though she had a mild fever?

That’s a great question — if only the CDC would answer it. “I have not seen the transcript of the conversation,” was Director Thomas Frieden’s lame answer.

Meanwhile, the most obvious move, a travel ban from affected countries, is rejected with unpersuasive claims about the need to get aid workers to Africa. It looks and smells like political correctness searching for logic.

There isn’t any logic, so bet your hazmat suit a ban will happen soon. It’ll be one way for the new Ebola czar to make a mark. But it will take a miracle worker to restore Barack Obama’s credibility. While there are many things to say about his tenure, the one thing you cannot say is that the nation trusts him.

Poll after poll, on subject after subject, show a collapse. Consistently now, a majority of Americans say Obama is not trustworthy. Most think he’s a failure, many say he is incompetent and the vast bulk — 70 percent in some cases — says his key policies are wrong for America. He is so unpopular that members of his own party don’t want to be seen with him, lest his failures spawn a political plague.

Against that backdrop, any emergency will cause the national yips. The rise of the Islamic State and its beheadings of two Americans did it, and now Ebola is doing it. As “Ghostbusters” asked, who you gonna call? Certainly not this White House.

Credibility is like a reservoir or a bank account. You make deposits in good times so you can make withdrawals when you need them. Obama never made the deposits. It’s been all downhill since Day One. He blames others for failures, and when cornered or ambitious, reaches for a lie. Routinely.

The claim that “if you like your doctor, you can keep your doctor” is a defining example, but hardly the only one. Don’t forget “shovel-ready jobs” to justify a trillion-dollar boondoggle. Or there’s “not a smidgen” of corruption at the IRS. And Benghazi was caused by an anti-Muslim video.

His lies are legion and now he’s like the boy who cried wolf. When he makes a national appeal on Ebola, the trust tank is empty. If there’s one encouraging sign, it’s that Obama may sense he’s walking on thin ice. When Ebola started to dominate the news, he canceled two fund-raising trips. 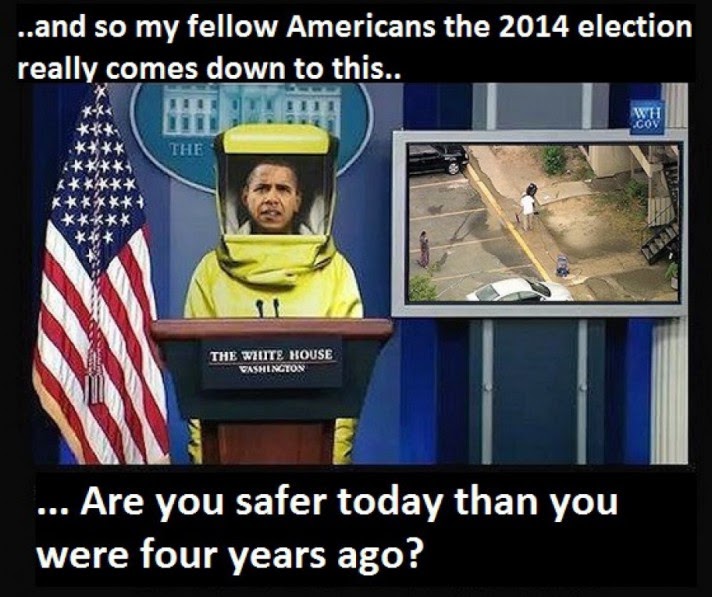