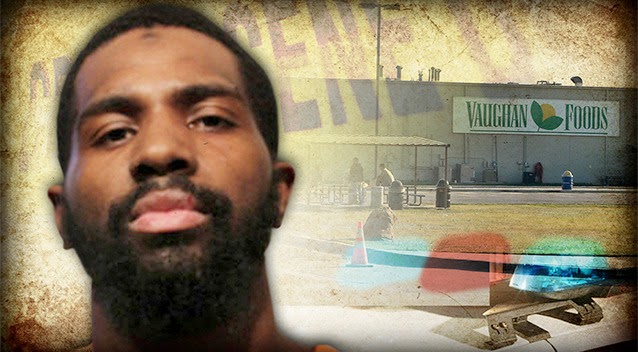 AP: Black Muslim convert Alton Nolen has been charged with murder in the first degree in the death of Colleen Hufford, in Moore, Oklahoma. She never saw him coming, according to police.

Just after 4pm on September 25, American Colleen Hufford, a 54-year-old grandmother and worker at Vaughan Foods in Moore, Oklahoma, was standing in the doorway of the front office in the food processing facility's main building when Alton Nolen, a co-worker who had just been suspended over an argument with another colleague, violently grabbed her from behind.

As horrified employees watched, Nolen, a 30-year-old production line worker with a criminal history, savagely sawed at Hufford's throat with a large kitchen knife he had gone home to retrieve, severing her head.

Nolen then went after Traci Johnson, a 43-year-old co-worker, viciously slashing her face and her throat in an attempt to decapitate her, too. But his bloody rampage came to an abrupt end when he was shot and wounded by the company's top executive, who also happens to be a reserve deputy sheriff. Johnson, while severely wounded, survived.


Nolen, who was charged with first-degree murder last week and is likely to face the death penalty, "openly admitted to beheading" Hufford and trying to do the same to Johnson, according to a court affidavit. Authorities said he told investigators he had felt "oppressed" at work and was angry with Johnson, who had filed the complaint that led to his suspension. Johnson, who is white, and Nolen, who is African-American, had gotten into an argument about race, according to law enforcement officials.

While Nolen told police he had deliberately gone after Johnson and planned to attack two other people, Hufford had not been a specific target, Mashburn said. She was just in the wrong place at the wrong time, the first person Nolen ran into on what would be a horrifically bloody Thursday afternoon in a sleepy suburb where major crime, especially something like this, is almost unheard of.
But as residents of Moore grapple with the shock of what happened in their town, the gruesome nature of the crime has also sparked a politically charged question: Was it an act of Islamist terrorism or an extreme case of workplace violence? 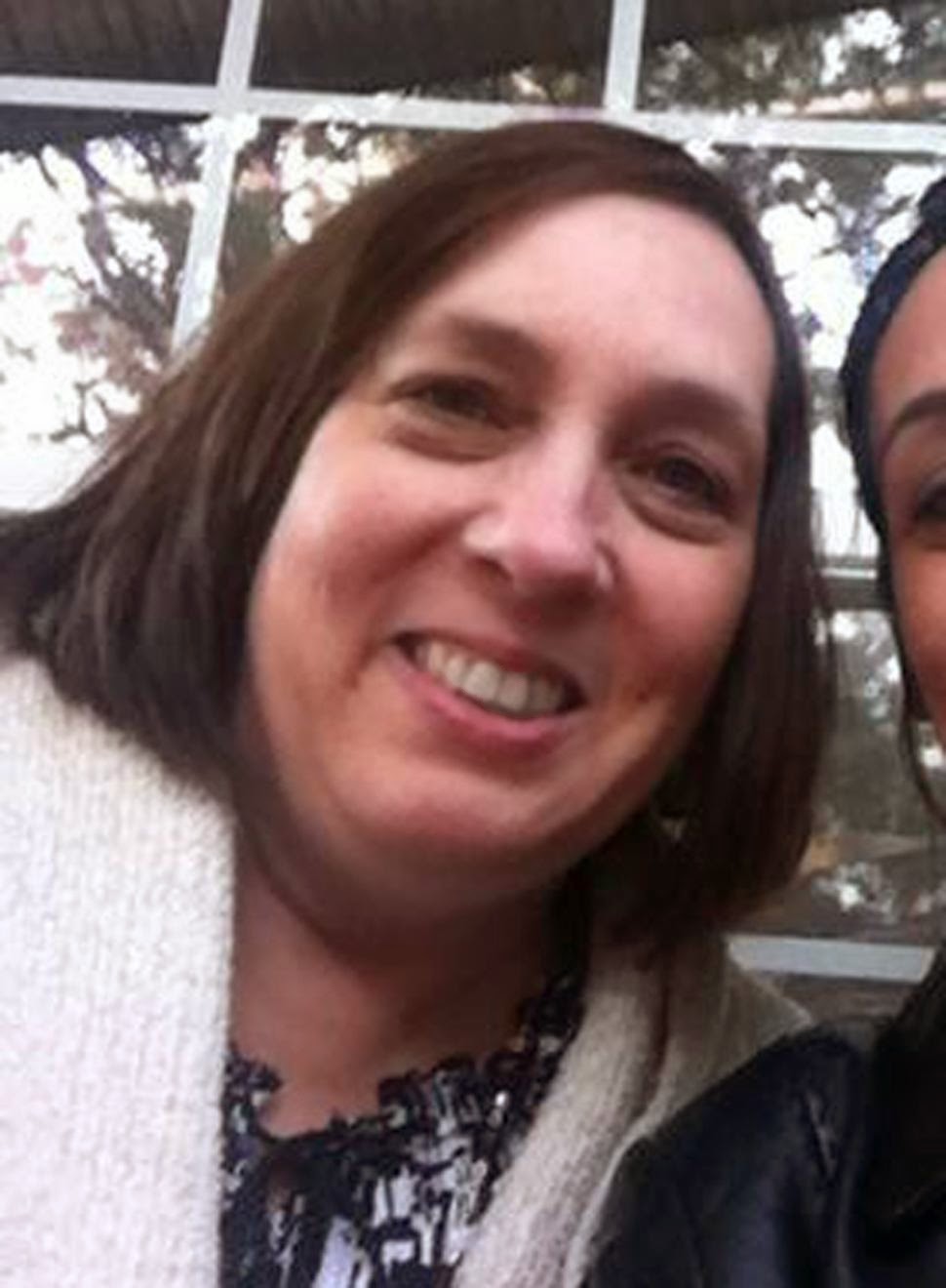 In this undated photo provided by the Hufford family, Colleen Hufford, right, is pictured with her husband, KC Hufford, relaxing in their home in Moore, Oklahoma.

Mashburn and other local officials have so far described what happened at Vaughan Foods as a horrifying but random case of an angry worker lashing out. But the grisly attack came after months of highly publicised beheadings by the Islamic State militant group and just days after the FBI warned local law enforcement officials around the country to be on guard against domestic attacks by supporters of the group, also known as ISIS or ISIL.

While the FBI says it has found no links so far between Nolen and the Islamic State or other extremist groups, there is little doubt he sympathised with their cause. Nolen, who had recently converted to Islam while serving time in prison for drug and assault charges, posted long anti-American screeds to his Facebook page, where he was listed under the name Jah'Keem Yisrael. On the page, which has since been removed, he published photos of Osama bin Laden and militant fighters as well as warnings to people who did not adhere to Muslim beliefs.

On March 7, Nolen shared a gruesome photo of the aftermath of a beheading, and in his last Facebook post, published on September 23, he warned of the sinful world's end. "This is [sic] the last days," Nolen wrote.

A screen grab of Alton Nolen's Facebook page where he was listed under the name Jah'Keem Yisrael. 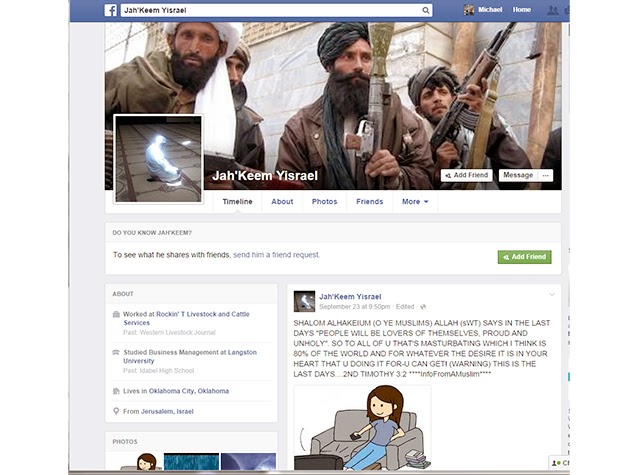 Police said they were investigating reports that Nolen had been trying to recruit co-workers to Islam, a detail that has fuelled concerns about a terror link. And Mashburn said Nolan apparently yelled out phrases in Arabic as he was carrying out the attacks, though the DA's office is still investigating exactly what was said.

Law enforcement officials have acknowledged that Nolen's extremist views probably influenced how he targeted his co-workers. "Obviously, there was some sort of infatuation with beheading," Mashburn told reporters. But, he reiterated, the attack still seems to have been driven more by the disagreement about race than by religion.

But others - mostly outside of Moore - disagree, insisting that Nolan's extreme views and the fact that he was apparently mimicking the violence perpetrated by jihadist groups overseas justifies viewing the attack as an act of terror. At the state capitol, a group of Republican state House members who make up the Oklahoma Counterterrorism Caucus issued a statement warning of the "dangers posed to this country and other freedom-loving peoples by Sharia," or Islamic law, and said that Nolen's actions should be deemed terrorism.

"The feds say this is workplace violence, but people know that's not true," said state Representative John Bennett, a Republican who has been criticised in the past for making anti-Muslim remarks.

His words were echoed by Texas Governor Rick Perry, who told Fox News that the attack was "an act of violence that is associated with terrorism." Perry, a possible contender for the 2016 Republican presidential nomination, said, "Americans aren't confused about what this is. ... I think any rational thinking American is going to look at this and go, 'This is more than just normal workplace violence."

And in Washington, Republic Frank Wolf, a Virginia Republican, sent a letter to Attorney General Eric Holder last week calling on the Obama administration to "not be quick to just dismiss this as workplace violence."

Wolf likened the event to the 2009 shooting rampage at Fort Hood, when Major Nidal Hasan, an Army psychiatrist angry over the wars in Iraq and Afghanistan, killed 13 people and injured dozens more. Hasan was later found to have exchanged emails with Anwar al-Awlaki, a cleric and al-Qaida leader who was eventually killed in a 2011 drone strike, and during his trial, Hasan said he had committed the act to show support for the Taliban. 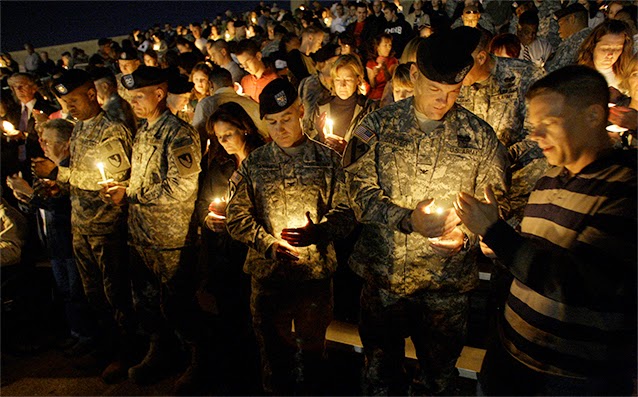 But the Obama administration, in a decision that continues to be controversial, called the 2009 attack "workplace violence" instead of terrorism, depriving victims of combat-related awards and benefits.

In his letter to Holder, Wolf warned the administration to not allow "political correctness to drive the investigation" in Oklahoma. "Whether the Nolen investigation ultimately shows he communicated directly with terrorists abroad or was independently inspired by the recent ISIS beheading videos, there is no question this attack represents a direct threat from radicalised Islamic extremists to the American people," Wolf wrote.

Until recently, Moore, located just south of Oklahoma City, had been more accustomed to the violence inflicted by Mother Nature than human beings. In May 2013, a large swath of the city was wiped out by a deadly EF5 tornado, one of the strongest storms on record and the fifth twister to hit Moore in 15 years. (In a tragic twist, Hufford had lost her home in the 2013 tornado, which missed the Vaughan plant by barely a kilometre away.) 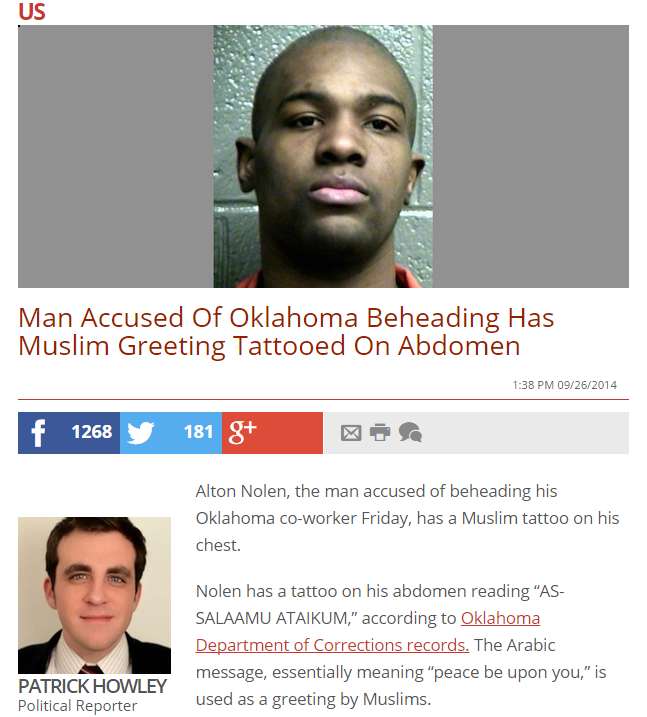 The storm killed 25 people, including 10 children, and earned Moore the reputation as the unluckiest city in America when it comes to bad weather. And now, the national spotlight is on Moore again, for another unimaginable moment of horror.

"The mood is just shock. It's eerie to think of it. It's not something that anybody anticipated happening, let alone in a place like Moore," said Rep. Tom Cole, a Republican congressman who lives just down the road from the Vaughan plant. "And at the same time you think, gosh, do we need to be in the national news again with some sort of tragedy?"

But unlike the aftermath of the tornado, when the national spotlight meant help for a town desperate to rebuild and recover, the latest round of attention has been mostly unwelcome. Many people in Moore declined to be quoted about the subject, wary of being drawn into a politically charged debate that, as one person put it, "doesn't even seem to be about what happened here."

But off the record, most people contacted by Yahoo News for this story suggested that they don't think what happened at Vaughn Foods was terrorism but rather a hideous act committed by a deranged young man who had problems long before he converted to Islam.

Though the mosque that Nolen attended in Oklahoma City reported receiving threats after the beheading, the mood in Moore has been one of shock but calm - a reaction from a city that is well practiced at dealing with tragedy in the national spotlight. But it's also the reaction of a city that, in spite of being firmly positioned in the Bible Belt, is perhaps more tolerant than some outsiders might expect.


"There's been no protests, no riots, no ugly incidents â€¦ just a feeling of, before we rush to any judgment, let's let law enforcement do their job," Cole said. "They are going to look at this about as thoroughly at the local, state and federal level as they can, and I think people generally trust that." 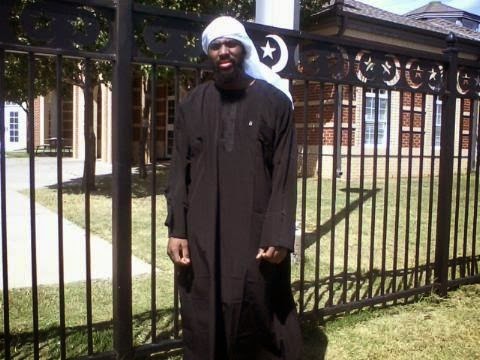 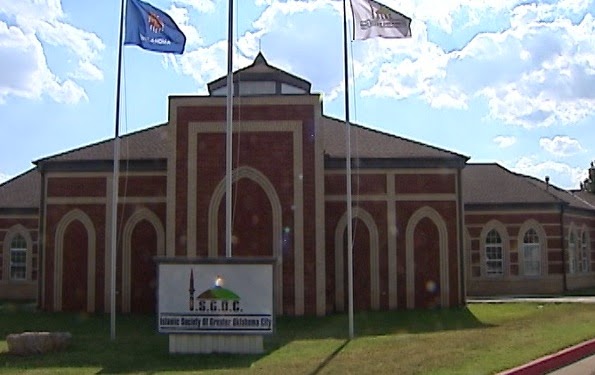