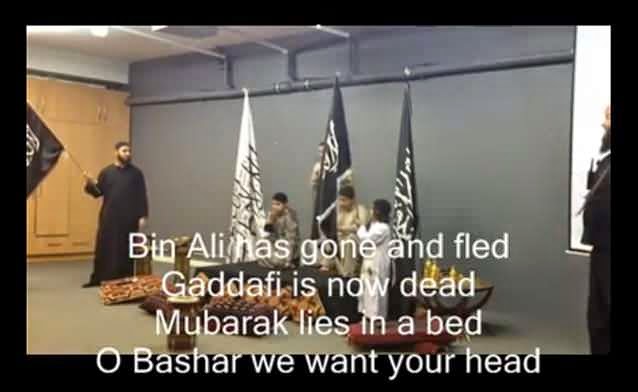 Six-year-old 'soldier for Khilafa': kids radicalised in shocking video. A Sydney Muslim youth group is under investigation after a disturbing video of children as young as six years old calling for an end to Australian democracy was unearthed by 7News.

In the vision, children as young as six years old call for violent action against non-Muslims and to reject Australia and its values. Video reveals shocking radicalisation of Australian Muslim children. A terror risk expert says it's brainwashing, aimed at creating violent extremists. The video shows four Australian children, aged six to 13, calling for an end to our way of life.

"These are disturbing and shocking images and they do raise concerns about the welfare of the four young boys who are identified in the video,” Family and Community Services Minister Gabrielle Upton said.


A group calling itself The Muslim Youth Project runs regular events for young children. In the video of the event held on September 21 in 2013 in Lakemba, young boys rally under the banner "Soldiers of Khilafa" with a six-year-old proclaiming: "You're never too young to be a Soldier for Khilafa."

The children promise to die fighting to end democracy in Australia, replacing it with a Caliphate ruled by Islamic Sharia law. They also call for American President Barack Obama to ‘go to hell’, for Syrian President Bashar al-Assad to be beheaded and for an end to Western ideals.

"I think it's ugly, I think it's sickening, and I think it's absolutely disturbing,” Immigration Minister Scott Morrison said. "It's one thing for these peddlers of vicious hate to do that themselves, which is appalling enough, but to recruit children into such a sickening display I think appalls all Australians of all religions, rightly."

The man leading the chant is Bilal Merhi, a senior figure in the radical group Hizb ut Tahrir. He was recently in Indonesia delivering a sermon to 200,000 people. "Yes my brothers, we will change the world to suit Islam… The Muslims living in Australia are also engaging in this struggle,” he said in a video of the sermon.

After the 2012 Muslim riot in the streets of Sydney, Merhi lead the call for Muslims to hit back with force, saying: "Those who mock you, ridicule, insult you, they will not hear our response, they will see out response."

A chilling new video unearthed by 7News reveals young children calling an end to Australian democracy, for American President Barack Obama to ‘go to hell’ and for Syrian President Bashar al-Assad to be beheaded. His involvement with this national Muslim Youth group has jolted governments into action.

The group's Facebook page proclaims democracy stands for death, corruption and slavery and to avoid non-muslims at Christmas and Easter. It has prompted the Government to take action. "I've instructed my department to work very closely with the police to get to the bottom of the facts, because what we see is the welfare of these young boys being put at risk,” Minister Upton said.

Among those who registered their attendance were at least four senior members of Hizb ut Tahrir and Sheikh Haron, who is currently on bail charged with 40 counts of indecent and sexual assault.

A key concern is that the boys are being radicalised to carry out violent attacks like 17-year-old school student Abdullah Elmir, the new poster boy for ISIS in Iraq. "Ultimately you get the situation where you have young people cross the line and carry out violent activities, as has happened in Ottawa in recent days, as happened in Melbourne with the attack on the two police officers, [and] as happened with drummer Rigby in the United Kingdom,” security expert Neil Fergus said.

Mr Morrison said the video is "not reflective of the broader Islamic community of Australia. This is a cult which exists in a very small section of Australian society and it's a cult that we need to weed out," he said.

"Hizb ut Tahrir is not part of the solution in this country in terms of countering violent extremism... They're rats that are crawling under their rocks as the spotlight comes onto them, but we need to get this poison out of the system."