Hong Kong Protest As Much About Dollar As Democracy 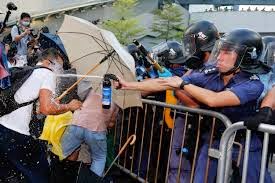 HONG KONG--A key reason why protesters in Hong Kong are demanding free elections for the first time is their dissatisfaction with the state of the city's economy and the pro-business establishment that runs it.

Hong Kong has one of the world's biggest wealth gaps and its highest real-estate prices. Years of stagnant wage growth have created deep frustration among students and the middle class.

One target of their frustration is the city's tycoons, a handful of families and colonial era conglomerates that control most of the real estate, many of the retailers and nearly all of the utilities and buses.

"Tycoons don't need sympathy, but they're between a rock and a hard place," said Jean-Pierre Lehmann, a visiting professor in the University of Hong Kong's business and economics program. "Hong Kong has a number of critical problems, such as inequality, and the tycoons are seen as being an emblem of that."


To be sure, protesters are angry about the rising influence of mainland China on the former British colony, but when asked, many students will express frustration with their economic prospects.

Many of the city's tycoons have been noticeably silent since the protests began. Those who have spoken out have called for an end to the protests while finding gentle words for the pro-democracy movement.

Asia's richest man, Hong Kong tycoon Li Ka-shing, who Forbes says is worth about $31.4 billion, said in a statement Wednesday that he understood the "passion" of Hong Kong students but urged them to go home. 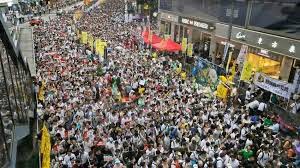 The tycoons' words don't resonate with young protesters such as Arnold Chung, 19, who expects to live with his parents for years. Average starting salaries for university graduates have risen 1% annually over the past 17 years, to 198,000 Hong Kong dollars (U.S. $25,522) a year, lagging behind inflation and lagging far behind the rise in housing prices.

"The young generation doesn't listen to Li Ka-shing," said Mr. Chung, a student. "We expect rich people to say this (protest) will disturb the economy."

Even as thousands of protesters took to the streets, Mr. Li's Cheung Kong property development arm was unveiling apartments that totaled 165 square-feet, among the city's tiniest homes. The apartments, about the size of a one-car garage, haven't been priced yet, but slightly larger units have recently sold in the city for between HK$1.77 million and HK$3.6 million ($228,000 and $464,000 U.S.). Mr. Li and Cheung Kong wouldn't comment beyond Mr. Li's earlier statement. 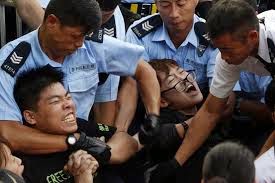 Once seen as the proud symbols of Hong Kong's rising power, these tycoons have faced criticism for getting richer while residents fall behind. Many have benefited from China's growth, which aligns their interests with Beijing and further alienates them from the protesters. "These people are seen to be making a lot of profit with the government's help," said Joseph Cheng, a political-science professor at the City University of Hong Kong.

Hong Kong's tycoons range from Mr. Li, whose empire began with a factory making plastic flowers, to colonial-era conglomerates such as Jardine Matheson Holdings, run by the Keswick family, which got rich by trading opium and other goods in the mid-1800s.

They are typically family-run empires that have large real-estate businesses--five Hong Kong companies account for 70% of the private residential market, according to brokerage firm CLSA--and government concessions in industries such as telecommunications, ports and transportation. Some own retail outlets in highly concentrated industries such as supermarkets, where two tycoon-owned chains dominate sales, and they have franchises for goods such as Coca-Cola.

The wealth concentrated in these families makes Hong Kong among the most unequal places in the world, and the inequality has gotten worse over the past decade. According to Welch Consulting, an economic consulting firm, Hong Kong has 41 billionaires worth a total of $203.9 billion, equal to 74.4% of the city's annual economic output.

The only country with a higher concentration by this measure is the southern African nation of Swaziland, where the wealth of its one billionaire equals 99% of GDP, the firm's analysis of International Monetary Fund data shows. The ratio for Georgia, the No. 3 ranked country is 32.2% and for the U.S. its 14.1%. 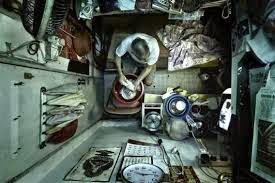 The wealth of the city has become increasingly concentrated. In 2000, 65.6% of the city's assets were controlled by the wealthiest 10% of its people, according to Credit Suisse. In 2007, the figure was 69.3% and this year it is 77.5%, making the concentration among the highest in the world and the growth among the fastest.

Some other tycoons have spoken, but carefully. Peter Woo, chair of Hong Kong-based real-estate developer Wheelock & Co., said this month that the pro-democracy protests cannot continue, saying that Hong Kong has already won because people have the right to protest. Jardine Matheson said in a statement that it respects the public's right to express its views, but "we believe that any expression of views should also respect the rights of fellow citizens."

Most of these companies have felt the protests firsthand. Students blocked the road in front of Mr. Li's headquarters and they forced a third of the Chow Tai Fook jewelry stores, controlled by the family of Cheng Yu-tung, to close early. Guests at Jardine Matheson's flagship Mandarin Oriental Hotel also had to walk 400 meters to their rooms because the street was closed.

One way the tycoons exert control over Hong Kong is through the 1,200 member committee that has selected the city's chief executive. While some members are elected by the public, most are selected by business groups. A new version of this committee will likely be used to approve the candidates for the next chief executive's election in 2017, which frustrated protesters, who want candidates to be nominated by the public. 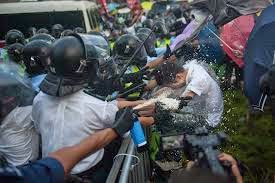 Negotiations between the city and students are likely to start next week and one area city officials have said could be negotiated is the makeup of that committee. While that could erode the tycoons' power, few expect the change to be dramatic.

"Beijing has relied on cooperation with the tycoons to control the selection of the chief executive," said David Webb, a former investment banker who runs corporate governance site Webb-Site.com. "There's no way that they're going to shift the composition of the committee from the tycoons to the pro-democracy camp."


Another way the government could placate protesters is to announce a plan to make housing more affordable in Hong Kong. That was a big focus for Chief Executive Leung Chun-ying when he took office and something that Beijing has backed.

The tycoons' difficult position was illustrated before the protests exploded, when China's leaders called them to Beijing to get them to publicly support the rules it has approved for elections in the city. They dutifully traveled to Beijing, met with China's President Xi Jinping, among others, and made statements afterward.

The effort didn't help much. "Their sway on public opinion is declining, particularly among those below 30," said Willy Lam, an adjunct professor at the Chinese University of Hong Kong's Centre for China Studies. "But nonetheless, Beijing still subscribes to the old belief that Hong Kong people are economic animals, and these tycoons are major employers."


Then when the protests hit, most of the tycoons went quiet. 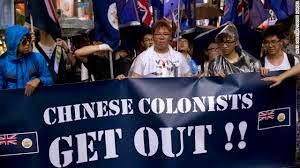