(Feature article direct from the BARE NAKED ISLAM on 3 October 2014.) 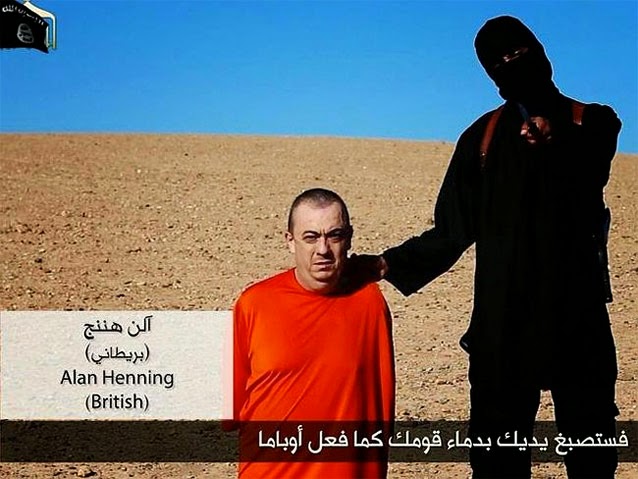 British citizen Alan Henning beheaded by the Islamic State (ISIS) in Syria. Henning had been a dedicated humanitarian aid worker helping Muslims in Syria. See where it gets you if you stands with Evil Muslims? Next on the beheading list is another American.

A video has surfaced online that appears to show the beheading of British captive Alan Henning by a purported member of the terror group ISIS, who then threatens the life of an American hostage.

“I am Alan Henning. Because of our Parliament’s decision to attack the Islamic State [ISIS], I, as a member of the British public, will now pay the price for that decision,” Henning says in the video, before his apparent executioner speaks.


“The blood of [fellow slain captive] David Haines was on your hands, [British Prime Minister David] Cameron,” the black clad militant says. “Alan Henning will also be slaughtered but his blood is on the hands of the British Parliament.”

Henning then appears to be killed. A quick edit follows and the executioner, apparently the same one as in the other videos, speaks. “The blood of David Haines was on your hand, Cameron. Alan Henning will also be slaughtered, but his blood is on the hands of British parliament.” The executioner then begins to saw at Henning’s neck as the video fades to black. The next image shows Henning’s dead body, with his severed head resting on his torso.

Near the end of the video another hostage is seen alive, identified as an American, as the militant says it’s right that his group targets Americans as the U.S. continues its aerial bombardment of ISIS targets.

“Obama, you have started your Arab bombardment… It’s only right that we continue to strike the next of your people,” the executioner says at the video’s end as a man, identified in the video as Peter Edward Kassig, an American, sits on his knees.
British hostage beheaded by ISIS

The video ended with an Islamic State fighter threatening a man they identified as an American. "Obama, you have started your aerial bombard of Shams (Syria), which keep on striking our people, so it is only right that we strike the next of your people," a masked militant said.

This is the fourth such video released by the Islamic State group. The full beheadings are not shown in the videos, but the British-accented, English-speaking militant holds a long knife and appears to begin cutting the three men, American reporters James Foley and Steven Sotloff and British aid worker David Haines.


Henning (47) a British taxi driver nicknamed "Gadget," had joined an aid convoy and was taken captive on December 26, shortly after crossing the border between Turkey and Syria. 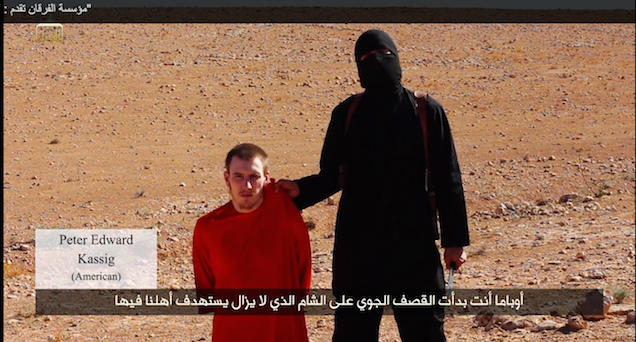