(Feature article direct from the STRATEGY PAGE on 20 October 2014.)

During the initial tests of the new system over 80 percent of the Bengali Muslims who applied were rejected because they did not have the required documents to prove that their families had lived in Burma for generations.

The UN, the United States and most Moslem countries have been pressuring Burma to make the so-called Rohingya in Burma citizens. This would, according to the foreign critics, halt the violence between Moslems and Buddhists in Burma. That’s unlikely as far as the Burmese are concerned.

The Burmese also point out that the problem of countries refusing to grant citizenship to a minority is an old one that is not easily solved. The most notorious example of this is found in Arab nations where it is quite common. The most troublesome example is the Palestinians, who are refused citizenship in most Arab countries.

This citizenship for migrants issue is less of a problem in Western nations and a few Middle Eastern ones (like Israel and Jordan) but is not really an anti-Palestinian effort as much as it is the continuation of an ancient practice which are common in eastern Asia and Europe as well.

Burma long refused to even consider making the so-called Rohingya citizens, despite the fact that most Rohingya have lived in Burma for over a century. Some Rohingya still have kin back in Bangladesh but tend to consider themselves Burmese. Meanwhile there is growing popular anger among Burmese towards Moslems in general and the Rohingya in particular.  This is fed by the continuing reports of Islamic terrorism word-wide and especially in the region (Thailand, India, Bangladesh and China). 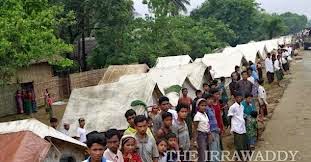 The wealthy Arab oil states have put their considerable diplomatic and economic pressure on the UN to make a fuss but the Burmese generals long insisted that this could be safely ignored as they have been ignoring UN criticism for over half a century and getting away with it.

The Arabs don’t get a lot of sympathy outside the Moslem world because anyone who can count notes that there is a lot more oppression and violence against non-Moslems by Moslems than the other way around.

As more Western nations joined in with the demands for granting citizenship for so-called Rohingya the government decided to make a gesture. But now that the gesture has been rejected the pressure will continue.

In the southeast (Karen state) army soldiers moving into territory controlled by Karen tribal rebels are being opposed by the rebels. This is nothing new but nearby Thailand is no longer allowing Karen civilians to flee into Thailand to get away from the violence. Thailand has been dealing with tribal refugees fleeing northern Burma for decades and is no longer going to tolerate it.

The rebels involved belong to the KNU (Karen National Union) and the DKBA (Democratic Karen Buddhist Army). The DKBA had made peace with the government in the 1990s, but never felt it was getting a fair deal. In 2012 DBKA allied with the KNU rebels and resumed fighting. The two rebel groups are now negotiating a more comprehensive peace deal with the new "democratic" government.

The tribal leaders understand that it's the same generals pretending to be democrats, but the generals appear willing to make some concessions for peace. So far the army has continued its aggressive ways and the Karen rebels keep fighting back.

Locals report that some clashes with troops are not reported, even when the soldiers are at fault (and themselves inclined to keep quiet about it), in order to keep the peace talks going. This has been difficult and the Karen have often been at odds with the other tribal groups in the north over negotiating goals and methods.

October 15, 2014: In the north (Kachin state) the army ordered over a thousand civilians to leave three villages to avoid getting hurt as the army moves in to enforce an order for the KIA (Kachin Independence Army). The KIA is accused of demanding protection money from the jade mining companies in the area.

Burma is the main source of jade on the planet and exports about $4 billion worth each year. Yet only about one percent of that is taxed and half of it is found by illegal mining operations and is quietly sold to Chinese traders. Most of the illegal jade trade is controlled by generals who have connections inside China. The rest is controlled by rebels.

The military men are not giving up all their illegal businesses and the government, despite being elected, is reluctant to force the issue, at least not yet. Most of the jade is in the northern tribal territories and the army is constantly trying to force tribal rebels out of jade producing areas.  The TNLA (Tanang National Liberation Army) rebels in nearby Shan state are allies of the KIA rebels. Together these two groups provide most of the armed opposition in the north.

October 11, 2014: In the southeast (Karen state) a shell landed in a rebel held area killing four civilians and wounding many more. It was unclear if the shell was fired by the army or the KNU. Fighting between rebels and troops had broken out the day before and closed the main road from the capital to the border town of Myawaddy, which is a major border crossing point with Thailand.

Until 2011, when the generals allowed real elections, the military government was quick to arrest people on the least suspicion. This resulted in a lot of people imprisoned (for political or criminal offenses) who should not have been. The new democratic government has been reviewing many of those cases and freeing prisoners ever since.

October 4, 2014: In the north (Shan state) three bombs went off in the state capital Taung-gyi, wounding two police officers. This happened late at night and the targets were police facilities.

October 2, 2014: In the north (Shan state) the army resumed its offensive against the SSA-N tribal rebels. This is despite the January 2012 ceasefire with SSA-N that is supposed to be in effect. Low level combat has continued in Shan state since June. Over the next two days at least five soldiers and two rebels died. The rebels claimed that 17 soldiers died in what was described as a failed attack.

October 1, 2014: The U.S. embassy warned Americans in Burma to avoid the Thailand border area because of increased fighting between tribal rebels and the army. The government told the UN that it was widely adopting its new plan to grant citizenship to Rohingya Moslems. The plan has been criticized by Moslems for being ineffective and just a publicity stunt.

September 27, 2014: In the southeast (Karen state) fighting broke out between Karen rebels and soldiers near the Thai border and a major road to the border. In Thailand the army was put on alert and additional troops were sent to the border to block Karen civilians from fleeing into Thailand.

September 26, 2014: In the southeast (Mon state) fighting broke out between Karen DBKA rebels and security forces. Two soldiers were wounded. This all began because the army was trying to prevent armed DBKA men from entering certain areas. The rebels were also angry because the army had recently raided the home of a DBKA commander.