Death Cult ISIS Ready To Nuke Europe Or US

(News article direct from the CLARION PROJECT on 7 December 2015.) 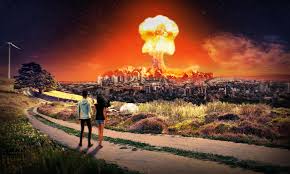 ISIS Wants to Carry Out a WMD Attack in Europe. A new report released by the European Parliament warns ISIS could hit Europe with a weapon of mass destruction in a terror attack. “The European Union and its Member States must prepare for the possibility of a chemical or biological attack on their territory by the self-styled 'Islamic State'” warns a new European Parliament report.

The report states ISIS could carry out a future attack with an improvised explosive device (IED) packed with chemical, biological, radiological or nuclear (CBRN) material. It thought ISIS may already have CBRN material within Europe. “ISIL actually has already acquired the knowledge, and in some cases the human expertise, that would allow it to use CBRN materials as weapons of terror” the Director of the Weapons of Mass Destruction (WMD) Non-Proliferation Centre at NATO, Wolfgang Rudischhauser, stated.

ISIS reportedly used chemical weapons in combat against Kurdish positions in Syria. It is said to have seized chemical weapons from old bunkers formerly held by Saddam Hussein. Nuclear material was also taken from the research facility at Mosul University, according to the International Atomic Energy Agency (IAEA).


The FBI thwarted at least four attempts by ISIS to purchase radioactive materials smuggled through eastern Europe. “We are dealing with a very serious, well-resourced, determined international terrorist organization that is now active on the streets of Europe,” said head of Europol, Rob Wainwright. Europol coordinates between EU police forces. “This represents the most serious terrorist threat faced in Europe for 10 years.”


The report recommended increasing training of security services to deal with a possible CBRN attack and equipping security at sensitive sites such as airports. It also advocated more intensive screening of potential returning foreign fighters to track those believed to have expertise in manufacturing WMDs.


Even Obama Is Worried Of ISIS Nuking New York City

President Obama invoked a bracing image responding to a question about the threat Russia poses to America while speaking at a nuclear-security summit in Brussels in March 2014.

Russia’s actions “don’t pose the No. 1 national-security threat to the United States,” Obama said in the Hague, the Netherlands. “I continue to be much more concerned, when it comes to our security, with the prospect of a nuclear weapon going off in Manhattan.”

Yikes! Does Obama really think there’s a serious chance that Manhattan could get nuked? He almost certainly does.