(Compilation of news articles direct from various US sources on 03 December 2015.)

SAN BERNARDINO, Calif. — A heavily armed Muslim man and Muslim woman terrorized this city on Wednesday, killing at least 14 people and wounding at least 17 at a Christmas party inside a social services center before leading the police on a manhunt culminating in a shootout that left the two suspects dead, the authorities said.

Panic, chaos and rumor gripped this largely working-class community about 60 miles east of Los Angeles as the attackers carried out the nation’s worst mass shooting since the assault on an elementary school in Newtown, Conn., nearly three years ago.

Chief Jarrod Burguan of the San Bernardino Police Department identified the two suspects as Syed Rizwan Farook, 28, and Tashfeen Malik, 27. Mr. Farook was born in the United States. Family members say they were married and had a 6-month-old daughter. "We are reasonably confident that we have two shooters and we have two dead suspects,” he said.


The shooting occurred during a Christmas party being held by the San Bernardino County public health department, which had rented a room at the Inland Regional Center. At least 14 people were killed and 17 others were wounded. The shooting occurred at about 11 a.m., and the suspects were shot at about 3 p.m. after a police chase that began at a home in Redlands, California, and ended with a shootout back in San Bernardino. 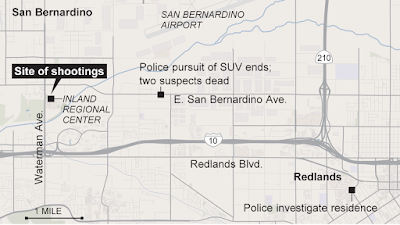 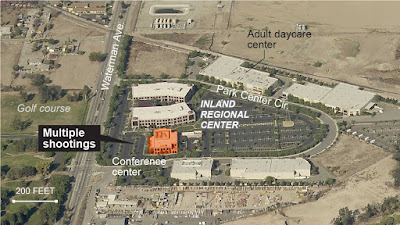 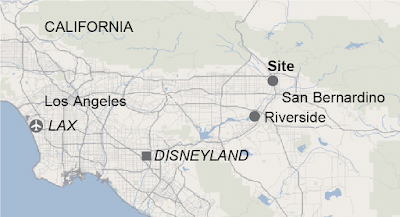 Syed Farook, an environmental inspector, had been employed with the county health department for five years. On Wednesday morning he attended a holiday party for the department at the Inland Regional Center, a sprawling facility that provides services for thousands of people with disabilities. He left “angry” after a dispute of some sort, the chief said, and returned with Ms. Malik around 11 a.m. — heavily armed.

That morning, Syed Rizwan Farook and his wife, Tashfeen Malik, left their 6-month-old daughter with Syed Farook’s mother, telling her they were dipping out for a doctor’s appointment, a relative said.

By nightfall, it was clear that was a ruse, as the police said the couple spent the day carrying out a rampage at a social services center that killed at least 14 people before leading officers on a sprawling chase that ended with the two dead in a bloody gunfight in a suburban neighborhood.

Before the attack, Mr. Farook, 28, who was born in Illinois and whose parents are from Pakistan, joined colleagues at an annual holiday party for the San Bernardino County Public Health Department, where he has worked for five years as an environmental inspector, officials said. He had attended the same party the year before, and he did not appear out of place.

Soon, however, he stormed out in anger. The nature of the dispute was not clear, but when he returned with his wife, 27, both of them were dressed in tactical gear and carrying assault rifles, officials said. That level of preparation is among the factors investigators are weighing as they examine a motive for the attack.

“There had to be some degree of planning that went into this,” Chief Burguan said. “I don’t think they just ran home and put on these tactical clothes.” He said the motive had not been determined. “We have not ruled out terrorism,’’ he said.

The couple were armed with .223-caliber assault rifles and semiautomatic handguns. While shots rang out, others in the building cowered and hid, sending out texts. Chief Burguan said that most of the victims were found in one part of that building but it took hours to render the scene safe. The attackers left three explosive devices behind, and the authorities were only starting to process the scene and could not identify any of the victims late Wednesday.

As the suspects fled in a black sport utility vehicle, large parts of the city were paralyzed throughout the day. Residents were told to remain indoors, and government buildings, stores, offices and at least one school were either closed or put on lockdown. Yellow school buses filled with survivors of the shooting were escorted by police vans to meet anxious relatives at a church.

Late in the afternoon, dozens of heavily armed police officers in tactical gear descended on a residential neighborhood in pursuit of the attackers. Witnesses described a wild scene as dozens of officers closed in on a vehicle, with hundreds of shots fired as the people in the vehicle battled the police. Chief Burguan said there were at least 20 officers involved in the gun battle.

The chief said a third person fled the scene and was taken into custody, but the police did not know his role, if any. A police officer was wounded in the shootout and was being treated at a hospital for non-life-threatening injuries.

Investigators were puzzling over the motives, and there were conflicting accounts of what led to the shooting. David Bowdich, assistant director of the F.B.I.’s office in Los Angeles, would not rule out terrorism. “We will go where the evidence takes us,” he said. “We are definitely making some movements that it is a possibility.”

One senior American official said that Mr. Farook had not been the target of any active terrorism investigation, and he was not someone the bureau had been concerned about before Wednesday’s shooting. Other officials said the F.B.I. was looking into a possible connection between Mr. Farook and at least one person who was investigated for terrorism a few years ago.

Earlier in the evening, law enforcement officers knocked down the door of the small townhouse in the nearby city of Redlands that they believed to be associated with Mr. Farook. They also secured Mr. Farook’s office.

President Obama once again stupidly called for better background checks and new restrictions on access to guns for people who might pose a danger. “We should come together in a bipartisan basis at every level of government to make these rare as opposed to normal,” he said in a previously scheduled interview with CBS News.

He added, “The one thing we do know is that we have a pattern now of mass shootings in this country that has no parallel anywhere else in the world, and there’s some steps we could take, not to eliminate every one of these mass shootings, but to improve the odds that they don’t happen as frequently.”

But California already has the strictest gun laws in the nation, according to the most recent report card by the Law Center to Prevent Gun Violence. It is among a handful of states that ban sale or possession of many assault weapons, including the most common models, although people who owned those firearms before they were banned are allowed to keep them. It was not known where and how the suspects obtained their weapons.

San Bernardino is a city of more than 200,000 people that has struggled in recent years as the city filed for bankruptcy, residents suffered a high rate of home foreclosures, and the commercial downtown deteriorated. The population has swelled over the past generation with immigrants from Latin America, Asia and the Middle East, drawn by proximity to Los Angeles, and housing that is affordable. 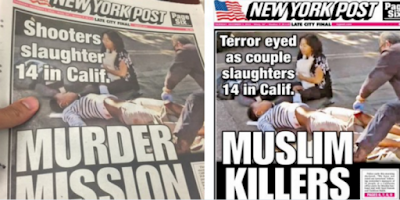 Is ISIS Behind the LA X-mas Party Massacre?

Twitter accounts allegedly affiliated with the Islamic State have claimed responsibility for the shooting that left at least 14 dead in San Bernardino, California. At left a screenshot of a Twitter account with ISIS propaganda can be seen tweeting about the attack.

Other Twitter accounts allegedly affiliated with the international terrorist group have also claimed responsibility. However, none of this has been verified. Law enforcement has refused to speculate at this time but the tweets are similar to those that were sent out by Islamic State affiliated accounts during the Paris attacks.

The Council on American-Islamic Relations has reluctantly condemned the shooting and said they will be holding a press conference Wednesday night along with a relative of one of the suspect’s named by the media.


“We condemn this horrific and revolting attack and offer our heartfelt condolences to the families and loved ones of all those killed or injured,” CAIR-LA Executive Director Hussam Ayloush said in a statement. “The Muslim community stands shoulder to shoulder with our fellow Americans in repudiating any twisted mindset that would claim to justify such sickening acts of violence.”