Fifteen Rules Of The Islamic Rape-Book Issued By ISIS

(John Shammas’s article direct from the MIRROR UK on 29 December 2015.) 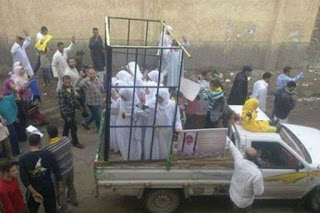 ISIS release 'rape handbook' to fighters, with 15 sickening new rules revealed. Document warns fighters not to have sex with sisters at the same time and says "women and children of infidels will become captives of Muslims".

Islamic State monsters have been issued new guidance on the rules of rape. ISIS militants were issued the new advice following a series of reported "violations". The new rules set out how members of the terrorist organisation, which holds large swathes of land in both Iraq and Syria including major cities Raqqa and Mosul, may treat their "sex slaves".

Thousands of defenceless women and children have become sex slaves in Iraq and Syria and Evil ISIS fighters have been given new rules to live by when it comes to their sex slaves. A "fatwa" was issued back in January, according to documents seized by US Special Operations Forces which have only now been released.


It begins: "One of the graces which Allah has bestowed up the State of Caliphate is the conquest of large surface areas of the country and one of the inevitable consequences of jihad is that women and children of infidels will become captives of Muslims. Consequently, it is necessary to clarify some rules pertaining to captured prisoners to avoid any violations in dealing with them."

The New Rape Rules According To Koran

1) It is not permissible for the owner of a female captive to have intercourse with her until after she has had menstrual cycle and becomes clean.

2) If she does not menstruate and is pregnant, he is not allowed to have intercourse with her until after she has given birth.

3) It is not permissible to cause her to abort if she is pregnant.

9) If the female captive becomes pregnant by her owner, he cannot sell her and she is released after his death.

10) If the owner releases his female captive then he is not permitted to have intercourse with her afterwards because she has become free and is no longer his property.

11) If two or more individuals are involved in purchasing a female captive, none of them are permitted to have sex with her because she is part of a joint ownership.

12) It is not permissible to have intercourse with a female captive during her menstrual cycle.

14) The owner of a female captive should show compassion towards her, be kind to her, not humiliate her and not assign her work she is unable to perform.

15) The owner of a female captive should not sell her to an individual whom he knows will treat her badly or do unto her what Allah has forbidden.


Not unlike US President Obama and UK Prime Minister Cameron and many other politically-correct politicians from the West, Professor Abdel Fattah Alawari, the dean of Islamic Theology at Al-Azhar University, said Islamic State was "nothing to do with Islam". He said that the terror group was misreading verses from the Koran. 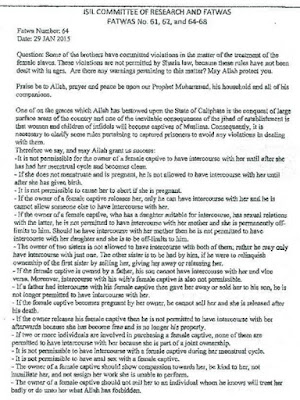 Related posts at following links:
Islam Is A Perversion Of Christian Doctrine: St. Aquinas
Posted by Hla Oo at 5:08 AM