(Andrew McCarthy’s article from the NATIONAL REVIEW on 02 January 2016.)

‘Mohammed cartoons don’t inspire Islamic violence. Islamic violence inspires Mohammed cartoons.” That is what Bosch Fawstin tells me. And he knows whereof he speaks. Fawstin is the award-winning cartoonist thrust into international notoriety in May when he won a “Draw Muhammad” contest in Garland, Texas — a contest that became the first terrorist target of the Islamic State on American soil.

The event was intended to be less a competition than a celebration of free-expression principles. Because those principles undergird Western civilization, they have become the prime target of Islamic supremacists. And when we talk about Islamic supremacists, we are not talking only about violent jihadists, such as the two ISIS-inspired terrorists who were killed in a firefight with police while attempting a mass murder of Fawstin and his fellow contestants.

There are also the “moderates” who specialize in exploiting the atmosphere of intimidation created by jihadist organizations: the Muslim Brotherhood’s international web of Islamic activist groups and the Organization of Islamic Cooperation (OIC), the 57-government bloc that claims to represent Muslim interests globally.

The methods of the “moderates” might differ from those of ISIS and al-Qaeda — and given the extensive promotion of jihadist violence by the Brotherhood and several OIC member states, we say “might” with tongue firmly in cheek. The “moderate” goal, however, is the same: the imposition of sharia, which is Islam’s societal framework and legal code. As Fawstin explains it: “Devout Muslims want their laws to be our laws. In essence, they want us to be de facto Muslims.”
In that vein, priority No. 1 has been pressuring the United States and its Western allies to stifle free expression, to supplant our free marketplace of ideas with Islam’s repressive blasphemy standards. This imperative has received a major boost from the Obama administration: from the president, who is sworn to preserve, protect, and defend the First Amendment, and also from his former secretary of state Hillary Clinton, who would like to be the next to make a mockery of that solemn oath.


Colluding with the Brotherhood and the OIC, Obama and Clinton sponsored United Nations Human Rights Resolution 16-18: a blatantly unconstitutional provision that calls on all member states to ban speech that could “incite” not just violence but “hostility” to Islam. This goes to the heart of why the Garland event has been widely misunderstood. 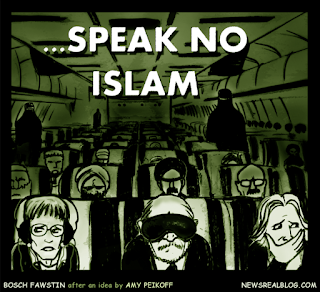 With Obama and Clinton working with anti-American Islamists to attack free speech, it is no surprise that the administration’s slavish media are portraying Islam’s critics as wild-eyed bigots, and their “Draw Muhammad” contest as an exercise in gratuitous insult — the kind of expression that even free-speech advocates often shy from defending.

The narrative betrays ignorance of Islam’s blasphemy proscriptions. Insulting speech barely scratches the surface of all that is forbidden. Classical sharia prohibits all artistic expression that depicts animate life — deeming it an offensive imitation of Allah’s creative act. Far beyond insult, moreover, sharia forbids speech that subjects Islam to any objective examination that could result in negative criticism. Also forbidden are words that imply unbelief; that could be taken to rebuke Allah or Mohammed (even if gently or in jest); or that appear to deny a principle established by authoritative sharia scholarship.

Islamic supremacists would apply prohibitions to non-Muslims as well as Muslims, because they believe that Allah has commanded them to impose sharia on the unwilling. And as for Muslims, speech that announces or implies apostasy is punishable by death.

‘I draw Mohammed because the enemy tells me I can’t.’

This is what drives Fawstin’s work. “I draw Mohammed,” he says, “because the enemy tells me I can’t.” In Garland, that meant not just a rendering, but a rendering of the act of rendering. Describing his winning cartoon, he explains: “I draw myself drawing Mohammed, and Mohammed with his sword in hand, yells at me, ‘You Can’t Draw Me!’ to which I reply (in a word balloon), ‘That’s why I draw you.’” 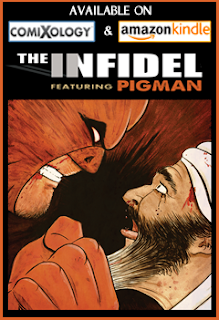 The idea was to underscore the free-speech purpose of the contest. The imposition of Islamic law “includes banning much of our music, art, and literature,” Fawstin observes. “Look at how ISIS has been destroying antiquities, for example.”

The way to fight back, he believes, is with open and unwavering dedication to free expression: The way I see it, if drawing Mohammad can get you killed, then he should be drawn again and again and again and again, until drawing him loses all power. And, within reason, doing something that an enemy doesn’t want you to do is reason enough to do it, on sheer principle.


Unlike many Americans, particularly in Washington, who believe in fighting fire with accommodation, Fawstin grasps that steely resolve is the only way to face down this enemy. Perhaps it has something to do with being raised in the Bronx — as a Muslim.

His Albanian family was what would today be called “moderate Muslims,” although they identified themselves simply as Muslims, Fawstin recounts. Interestingly, this echoes Turkey’s Islamist president Recep Tayyip Erdogan, who rejects the notion of “moderate Muslims” — he maintains that “Islam is Islam, and that’s it.”

Growing up, Fawstin increasingly sensed incongruity: His family was “moderate” in their adherence to Islam, rarely going to mosque and selectively following sharia strictures; yet the Jew-hatred and misogyny that are hallmarks of Islamic supremacism ran rampant among his “moderate” relatives.

As he recalls: I phased out of Islam in my mid teens when I began to think about morality in a serious way, when I saw the contrast between Islamic values and American values, and when I was beginning to really recognize what was good and true in the world.

For Fawstin, the 9/11 attacks were a call to arms — in the “pen is mightier than the sword” sense. He had “fallen in love with superhero comic books” during childhood and was already embarked on a career as a cartoonist. His rage over the atrocity merged with his professional passion to forge a determination to respond in a comic-book and graphic-novel form.

The semi-biographical result is The Infidel, Featuring Pigman, a comic book that is part of a graphic novel. The plot revolves around twin brothers who react to 9/11 in opposite ways: One dives deeper into his Islamic roots; the other, a Muslim apostate, creates “an ex-Muslim counter-jihad superhero comic book.”

It is a story within a story: As the superhero, Pigman, battles his jihadist nemesis, the conflict between the twins escalates. But That’s Just the Beginning of the Debate Naturally, I ask Fawstin, “Why Pigman?” The idea, he quips, is to exploit the enemy’s “pigotry.” It is a concept quite at odds with Western governments’ “outreach” style of counterterrorism.

Rather than attempting to placate jihadists, Fawstin prefers to study their ideology, find out what they fear and loathe, and use it against them. He recalled from his Muslim childhood the strictures against eating pork or “coming into contact with pig, in any way,” along with the fact that being called a “pig” was considered the worse of insults. Thus he decided that pigskin leather was the perfect costume for his protagonist, who is moved to combat after witnessing the 9/11 attacks from New York’s Ground Zero.

Fawstin would not have created the cartoon series or drawn Mohammed at Garland had it not been for 9/11. Contrary to the blame-America-first storyline, it was the jihad that provoked his determined response, not the other way around. And it is the threats he’s received because of his work that inspire him to persevere.

The enemy is no match for America on the military battlefield. Nor can they compete in the battle of ideas, where their tactic is suppression precisely because their repugnant ideas cannot bear examination. As terrorists, their only power lies in paralyzing us, instilling in us a fear to defend our principles, like free speech.