German Patriots Are Fighting Back The RapeFugees

(Staff Article direct from The NEW OBSERVER on 11 January 2016.)

Halle: Identitarian Activists Hand Out Pepper Spray. Grateful German women snapped up boxes of pepper spray handed out by activists from the German Identitarian movement in the Saxony-Anhalt town of Halle today, in a powerful political propaganda act that the organization hopes is emulated elsewhere in the country.

The pepper spray giveaway took place at noon at the Riebeckplatz, which is Halle’s largest central transportation hub, with at least 52 trains passing through every hour at peak times. According to the Identitarian Facebook report on the event, the “action is a response to the unprecedented wave of sexual assaults on women by ‘asylum seekers’ on New Year’s Eve.

“What happened in Cologne is happening everywhere,” they continued, adding that there had been an attempted rape by invaders only the day before. “We want to help ensure that women can continue to feel safe in our town. We received many friendly words, smiles, and encouragement for this action. Thanks for that!” the Facebook post read.


They also handed out leaflets, of which the full text is reproduced below:

Surely you have heard of the shocking events in Cologne. On New Year’s Eve there was massive sexual violence: Women were surrounded, abused, dishonored, and stripped.

“What women have experienced there were rapes,” said one officer, who served on the night. Meanwhile, the number of victims has risen to about 500, as more and more women report to the police.

There were at least two cases of rapes. The police seemed unable to prevent the brutal assaults. Sadly, Cologne is not an isolated case. At the same time, similar incidents occurred in Hamburg, Frankfurt, Stuttgart, and many other cities.

The perpetrators belong to organized ‘asylum seeker’ gangs. Over 1,000 North African and Arab men are said to have gathered together for the violent excesses. The vast majority of identified suspects are alleged ‘refugees.’

Cologne Mayor Henriette Reker therefore convened an emergency meeting. But the result was shocking: instead of finally showing firmness against criminal foreigners, Reker called on the German women to change their behavior!

At major events in the future, she said, they should keep an ‘arm’s length’ distance from strangers. This is a policy that mocks the victims: Instead of defending our security, our dignity, our way of life, and our culture, she asks us to submit to the stranger—in our own country.

Our people deserve security. But this policy is a betrayal of the people. Cologne is a symbol. It has shown that the state has failed: It has not protected its borders. In the past year, more than a million illegal immigrants have entered our country, and the state now cannot—or will not—protect women and girls.

Therefore, it is up to us to defend ourselves. It’s time to fight back. For us, our families, and our country. Therefore, the Identitarian movement has decided to hand out free defense sprays to women. The defense spray in your outstretched hand is the right arm length that you need in order not to become a victim!

Our appeal is: Do not give in! Defend yourselves — because it is our land!

Take care of yourself and travel safely through the city. 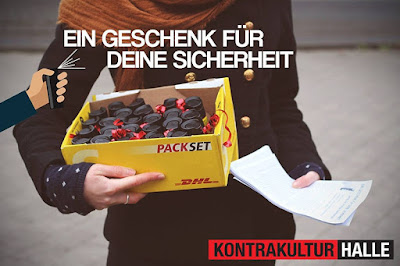 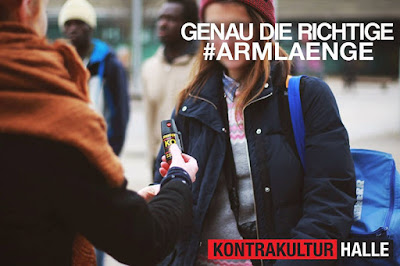 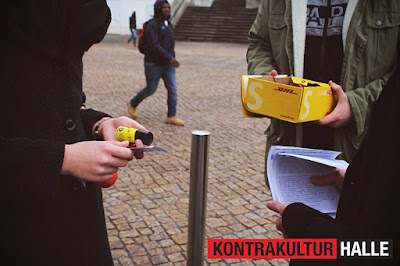 (Muslims across Europe have been assaulting white Christian women for years now.)