Myanmar (Burma) Is Powered By Peanuts

As I was traveling through Myanmar last month, on the road somewhere between Bagan and Mt. Popa, I pulled over to join a group of peanut farmers. The day before, I had chatted with a shop owner and asked about peanut season. “It’s over,” she told me. “The season is only until the fall.”

So I didn’t expect to still see women out in the field, sorting through piles of plants so dry that they looked like they’d been deep-fried.

But there they were—covered by hats to protect themselves from the sun, yanking whole plants out of the ground to reach the peanuts that grow beneath the soil. The women then sort through the pile, picking out the peanuts. Even when it’s not peanut season, harvesting apparently doesn’t stop.

The entirely female group of workers is no oddity in Myanmar, or many of the other rural economies of the world. The United Nations’ Food and Agriculture Organization estimates that women grow half of the food in Asia.


Peanut harvesting is the type of work that is done from early morning until lunchtime—until the sun fries your body and your brain, drying you out as much as it does the plants being sorted. About 60 percent of the peanuts grown here will be pressed into oil, while the rest are sold whole at local markets.

Indeed, peanut butter isn’t part of the equation here. In the US, The American Peanut Council claims that peanuts weren’t popular domestically for a long time because they were considered a food for the poor—but then peanut butter came along. Now, the average American will eat 1,500 peanut butter sandwiches by the time they graduate high school.

While Myanmar might not be the cultural home to the peanut butter sandwich, the peanut is still king here. The historical consensus is that the peanut originated in South America and went global, thanks to Spanish explorers, eventually making its way to Asia, where it still thrives.

Here, it’s sprinkled on top of noodles, pounded into salads, made into soup, toasted and served as a snack, and, most of all, pressed into oil.

“We use a lot of peanut oil,” Burmese food and travel writer Ma Thanegi tells me. “We add roasted and pounded peanuts to salads of blanched spinach, pennywort leaves, or tomato salad. We also eat them boiled in the husk—it’s so sweet. Most salads are made with powdered dried shrimp, so [replacing shrimp with] peanuts make it vegetarian.”

Unfortunately, vegetarians with peanut allergies are pretty much screwed.

Myanmar’s two major oil crops are sesame and peanut, but the latter is generally preferred for salad dressing and deep-frying. (Because of its high smoke point, peanut oil is even used for cooking underwater in submarines, because a smoking pan isn’t a good look in an environment with a limited supply of air.) According to the FAO, the only crop that is more important than oil in the country’s rural economy is rice. And that’s saying a lot, considering that the literal translation of the Burmese term for eating—thamin sa—means “to eat rice.”

In Myanmar, the oilier a curry, the better. In Cook & Entertain the Burmese Way, Mi Mi Khiang’s recipe for Burmese chicken curry calls for three-quarters of a cup of oil for less than three pounds of chicken.

That’s a hell of a lot of oil. “The recipes given contain the full amount of oil liked by the Burmese. It may appear excessive to others, but this is the way these clear-oil curries are eaten,” Khiang writes.

Because of this reliance on these legumes and their precious oil, peanut crops claimed 1.8 million acres of land in Myanmar in 2009. The face of the country may be changing quickly, but in 2006 two-thirds of the population was still engaged in subsistence agriculture. A recent article in Myanmar’s Eleven reports that agriculture represents 32 percent of the country’s GDP. (By contrast, agriculture represented a 4.8 percent share of the US GDP in 2012.) But the majority of Myanmar’s farms are small; more than half are less than five acres.

Further down the road from the peanut farm, I met a family that rents land to palm sugar, toddy, sesame, and peanut oil producers. In order to extract the oil, they must smash the peanuts (or sesame) seeds with a hsi zone mill, which involves an ox walking in circles, four kilos of shelled peanuts, and two hours of time. At the end, it produces about two liters of oil; the remains of the peanuts are then fed to animals.

This is not a large-scale operation, though. Unsurprisingly, most peanut oil is produced with machines, not oxen, but hsi-zone millers are still used in remote villages. As supersized versions of a rotating mortar and pestle, they may be slow, but their oil is still considered the pick of wealthier village folk. “Ox-pressed” implies cold-pressed, and a higher level of quality.

As popular as peanut oil is here, it’s hardly the cheapest option. In recent years Myanmar has begun importing more and more palm oil from Malaysia and Indonesia. Its cheap price tag has boosted its popularity, even though traditional preference still lies with peanut oil.


Maybe we should start saying “it’s like working for palm oil,” instead? 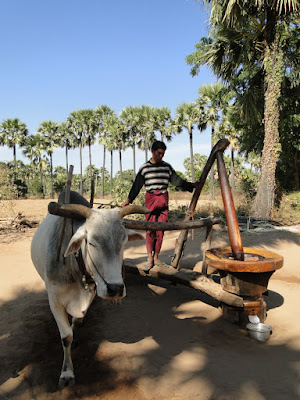 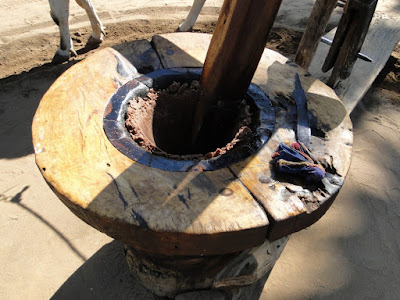