(Soeren Kern’s Article direct from The GATESTONE INSTITUTE on 26 September 2011.) 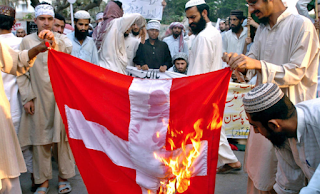 A Muslim immigrant group based in Bern has called for the emblematic white cross to be removed from the Swiss national flag because as a Christian symbol it "no longer corresponds to today's multicultural Switzerland."

Ivica Petrusic, the vice president of Second@s Plus, a lobbying group that represents mostly Muslim second-generation foreigners in Switzerland (who colloquially are known as secondos) says the group will launch a nationwide campaign in October to ask Swiss citizens to consider adopting a flag that is less offensive to Muslim immigrants.

In a September 18 interview with the Swiss newspaper Aargauer Zeitung, Petrusic said the cross has a Christian background and while the Christian roots of Switzerland should be respected, "it is necessary to separate church and state" because "Switzerland today has a great religious and cultural diversity. One has to ask if the State wants to continue building up a symbol in which many people no longer believe."


In the interview, Petrusic said Switzerland needs new symbols with which everyone, including non-Christians, can identify. As an alternative to the current Swiss flag, Petrusic proposed the former flag of the Helvetic Republic   which was officially introduced in 1799 and consisted of green, red and yellow colors. "Those colors are similar to the current flags of Bolivia and Ghana and would represent a more progressive and open-minded Switzerland," Petrusic said.

The proposal to change the Swiss flag has been met with outrage across the political spectrum and is sure to fuel anti-immigrant sentiments in Switzerland. Sylvia Flückiger a councillor with the conservative Swiss People's Party (SVP) said the demands are: "Totally unacceptable. With our Swiss flag there is nothing to change. The next thing you know, they will demand even more, that we change our constitution."

Marianne Binder, spokeswoman for the center-right Christian Democrats (CVP) said: "This is just what was missing, that we need to change our flag. The Swiss flag is part of Swiss identity, precisely because it is inviting for all to want to be involved...even the immigrants."

Stefan Brupbacher, general secretary of the libertarian Free Democrats (FDP) said: "This is utter nonsense. The Swiss cross is an extremely successful and valuable global brand. It is a symbol of success and quality. We will tightly hold on to it, out of love for Switzerland."

The issue of Muslim immigration to Switzerland has been a hotly debated topic in recent years and the flag controversy is sure to add fuel to the fire. The Muslim population in Switzerland has more than quintupled since 1980, and now numbers about 400,000, or roughly 5% of the population. Most Muslims living in Switzerland are of Turkish or Balkan origin, with a smaller minority from the Arab world. Many of them are second- and third-generation immigrants who are now firmly establishing themselves in Switzerland.

The new Muslim demographic reality is raising tensions across large parts of Swiss society, especially as Muslims become more assertive in their demands for greater recognition of their Islamic faith.

The ensuing controversies are fuelling a debate over the role of Islam in Swiss society and how to reconcile Western values with a growing immigrant population determined to avoid assimilation.

Swiss courts have been jam-packed with Islam-related cases in recent years. In one case, Muslim parents won a lawsuit demanding that they be allowed to dress their children in full-body bathing suits, dubbed "burkinis," during co-ed swimming lessons. In another case, a group of Swiss supermarkets created a stir by banning Muslim employees from wearing headscarves.

In August 2009, the Swiss basketball association told a Muslim player she could not wear a headscarf during league games. In August 2010, five Muslim families in Basel were fined 350 Swiss Francs ($420) each for refusing to send their daughters to mixed-sex swimming lessons.

In September 2010, the secretary of the Muslim Community of Basel was acquitted of publicly inciting crime and violence. The charges were pressed after the 33-year-old made comments in a Swiss television documentary saying that Islamic Sharia law should be introduced in Switzerland and that unruly wives should be beaten. The judge said the defendant was protected by freedom of expression.

In November 2010, Swiss voters approved tough new regulations on the deportation of non-Swiss immigrants convicted of serious crimes. The measure calls for the automatic expulsion of non-Swiss offenders convicted of crimes ranging from murder to breaking and entry and social security fraud.

Also in November, Swiss Justice Minister Simonetta Sommaruga said the approval or extension of residency permits should be closely linked to the efforts immigrants make to integrate themselves. "Compulsory schooling must be respected. Children should attend all courses and exceptions made on religious or other grounds, for example in swimming classes, should no longer be possible," Sommaruga said.

In December 2010, the Federal Commission on Women's Issues called for Islamic burqas and niqabs to be banned in government offices and in public schools. The government-appointed committee said the move would prevent gender discrimination.

In January 2011, a 66-year-old Turkish woman living in Bern was sentenced to three years and six months in prison for encouraging the father and brothers of her daughter-in-law to carry out an "honor" crime against her for her "risqué lifestyle."

In May 2011, voters in canton Ticino, in Switzerland's Italian-speaking region, collected enough signatures to be able to launch a referendum that would ban burqas, niqabs and other Islamic head dresses. If the referendum goes ahead, it will be the first time in Switzerland that citizens have been asked to express an opinion on burqas.

Also in May, Swiss Defence Minister Ueli Maurer said increasing numbers of Swiss Muslims are training in Islamic militant camps in countries like Somalia and Yemen. In an interview with the SonntagsZeitung newspaper, Maurer also said that under current Swiss laws it is difficult to prevent Islamists from raising funds.

Meanwhile, an administrative court in Bern is expected to rule on the fate of a minaret in the town of Langenthal. Minarets are the tower-like structures on mosques from which Muslims are often called to prayer.

Muslims in Langenthal, a town with a population of about 15,000, had been given permission to build a minaret five months before a constitutional ban on minarets took effect in November 2009, but opponents of the project say the earlier approval is now null and void. The case is still working its way through the Swiss legal system.

In November 2009 Switzerland held a referendum in which citizens approved an initiative to ban the construction of minarets. The initiative was approved 57.5% to 42.5% by some 2.67 million voters. Only four of Switzerland's 26 cantons or states opposed the initiative, thereby granting the double approval that now makes the minaret ban part of the Swiss constitution.

In July 2011, the European Court of Human Rights rejected two cases brought by Muslims against Switzerland's constitutional ban on building minarets. A seven-judge panel at the Strasbourg-based court said that it would not consider the cases as the plaintiffs failed to show how the ban harmed their human rights and they therefore "cannot claim to be 'victims' of a violation" of the European Convention on Human Rights, which the court enforces.

The minaret ban represented a turning point in the debate about Islam in Switzerland. The initiative was sponsored by the conservative Swiss People's Party (SVP), which says the minarets symbolize the growing self-confidence and intolerance of Switzerland's Muslim community.

The SVP has described the minaret is a "symbol of a religious-political claim to power and dominance which threatens -- in the name of alleged freedom of religion -- the constitutional rights of others."

The SVP has backed its claim by citing a remark by Turkish Prime Minister Recep Tayyip Erdogan, who has implied that the construction of mosques and minarets is part of a strategy to Islamisize Europe. The pro-Islamist Erdogan has bragged: "The mosques are our barracks, the domes our helmets, the minarets our bayonets and the faithful our soldiers." Erdogan has also told Muslim immigrants in Europe that "assimilation is a crime against humanity."


In recent years the number of mosques in Switzerland has mushroomed; there now are over 200 mosques and up to 1,000 prayer rooms dotted across the country. Critics fear the mosques are facilitating the establishment of a parallel Muslim society -- one that is especially welcoming to Islamic fundamentalists. 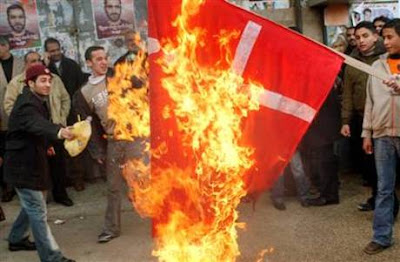