(News Article direct from The CHANNEL NEWS ASIA on 21 January 2016.)

Authorities in Singapore have uncovered a jihadi cell comprised of 27 men from Bangladesh. The men, between the ages of 25 and 40, were all working in the construction industry in Singapore and becaem radicalized in a mosque.

While authorities said they posed no immediate threat to Singapore and were considering armed waging jihad overseas, as Singapore’s Law and Home Affairs Minister K. Shanmugam noted in a Facebook post, “they could have easily changed their minds and attacked Singapore.”

Shanmmugam also noted that the group became radicalized in a mosque and posted materials possessed by the group on techniques of silent killing. The group watched videos racial Islamist preacher Answar al-Awlaki and children training to be jihadis.


The radicalized group supported the ideologies of Al Qaeda and the Islamic State. They began meeting in 2013 and were described as highly organized, taking measures to avoid detection. Singapore has deported 26 cell members with one serving time in jail for trying to leave the country illegally. He will be deported when he complete his sentence.

In response, Singapore’s Prime Minister Lee Hsien Loong said, “We are tightening up our security, and acting to protect our racial and religious harmony. Radicalization and terrorism must never take root in Singapore.

SINGAPORE: The Internal Security Department has arrested 27 male Bangladeshi nationals working in Singapore, who were planning to take part in extremist activities in other countries, including their homeland of Bangladesh. No terrorist acts were planned in Singapore, the authorities said.

The 27, all working in the construction industry in Singapore, were arrested under the Internal Security Act (ISA) between Nov 16 and Dec 1, 2015, the Ministry of Home Affairs (MHA) said on Wednesday (Jan 20). Most of them had worked in Singapore for between two and seven years, and they were not concentrated in any particular company or workplace, or living quarters, said MHA.

All but one have been repatriated to Bangladesh, with the last set to be repatriated after serving a 12-week jail term for attempting to illegally leave Singapore.

Of those arrested, 26 were members of a closed religious study group that supported the armed jihad ideology of terrorist groups like Al Qaeda and the Islamic State in Iraq and Syria, said the MHA. The 26 subscribed to extremist beliefs and teachings of radical ideologues like Anwar al-Awlaki, the ministry added, referring to an Al Qaeda-linked extremist teacher who was killed in Yemen in 2011.

The remaining Bangladeshi national was not a member of the group, but was found to be in the process of becoming radicalised and was supportive of extremist preachers, and also possessed jihadi-related material, the MHA said.

"The group members took measures to avoid detection by the authorities. They shared jihadi-related material discreetly among themselves, and held weekly meetings and gatherings where they discussed armed jihad and conflicts that involved Muslims. They also carefully targeted the recruitment of other Bangladeshi nationals to grow their membership," said the ministry in its press release, which listed the names of all 27. The group had been holding such meetings since 2013 at mosques which were near where they lived, added MHA.

Among the 26 repatriated Bangladeshis, 14 of them have been sent to jail under the country's Anti-Terrorism Act, said the Bangladesh High Commission in Singapore.

"The concerned agencies of the Government of Bangladesh produced them before a court and the court placed them on a four-day remand. During the remand, they will be interrogated to find out about their alleged involvement. They will be dealt with in accordance with the law of the land and if found guilty, legal action will be taken against them," a spokesman said.

The other 12 men, who returned on different dates, have been allowed to go back to their families as detectives "did not find their links with militancy in primary investigation”, Mashrukure Rahman, deputy commissioner (South Division) of Detective Branch at Dhaka Metropolitan Police, told The Daily Star on Wednesday (Jan 20).

Nonetheless, they are still "under close observation", he added in the report.

“This is the first time Singapore has uncovered a jihadist terror cell comprising foreigners," said an MHA spokesman. Previously, Singaporean Jemaah Islamiyah had been involved in terror incidents overseas, and several Singaporeans were detained last year for planning to take part in armed violence overseas alongside ISIS, said MHA.

A number of the group members admitted that they subscribed to the belief that they should participate and wage armed jihad on behalf of their religion, MHA said. Several of them contemplated travelling to and participating in armed jihad in the Middle East.

Some of the group members supported the violent actions of extremist groups that killed Shi’ites because they considered Shi’ites to be “deviant”, the authorities said. These Bangladeshi nationals also bore grievances against the Bangladeshi government over its actions against some Bangladeshi Islamic groups and leaders, according to the press release.

The Dhaka government has cracked down on militants in the Muslim-majority nation, blaming Islamist political opponents for instigating violence in the secular nation, and recently upheld the death penalty for a top Islamist party leader for war crimes committed decades ago.

Those arrested in Singapore had been encouraged by their leaders to return to Bangladesh and wage armed jihad against the Bangladeshi government, said the MHA. They had also sent monetary donations to entities believed to be linked to extremist groups in Bangladesh.

A significant quantity of radical and jihadi-related material including books and videos, as well as footage of children undergoing training in what appeared to be terrorist military camps, were recovered from the possession of the group, said the ministry.

Several members also had a shared document containing graphic images and instruction details on how to conduct “silent killings” using different methods and weapons. For example, a copy of one of the documents, seen by Channel NewsAsia, bore the title “Techniques of Silent Killing” in English, and contained a step-by-step illustrated guide on how to stab a seated man. 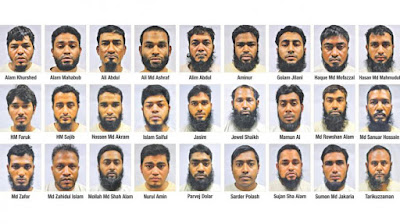 MHA said that the Work Passes of the Bangladeshi nationals have been cancelled, with 26 of them repatriated to Bangladesh where the authorities have been informed of the circumstances of their repatriation.

The remaining Bangladeshi national is currently serving a jail sentence in Singapore for attempting to leave the Republic via "illegal and clandestine means" after learning about the arrests of his fellow group members, the authorities said. He will be repatriated to Bangladesh upon completion of his sentence.

"The Government takes a very serious view of any form of support for terrorism and will take firm and decisive action against any person who engages in any activity in support of terrorism. Foreigners are guests of our country and they should not abuse this privilege and use Singapore as a base to import their own domestic political agenda and carry out activities in pursuit of such an agenda," said the Home Affairs Ministry.

"In the same way, foreign religious speakers who propagate divisive doctrines which could lead to mistrust, enmity and hatred among local religious groups and undermine Singapore’s social cohesion are not welcomed and will not be allowed to operate in Singapore.

"Any person, foreigner or otherwise, who engages in any activity that is inimical to Singapore’s national security and racial and religious harmony will be firmly dealt with under the law."

Singapore's Minister-in-charge for Muslim Affairs Yaacob Ibrahim also said he was "deeply concerned" about the arrests, and appealed to Singaporeans to be more vigilant towards radical teachings and ideologies, or of any suspicious activities.

"I hope we will remain united and not resort to discriminating foreign workers here," he added. "The actions of a few cannot determine how we treat others who have worked so hard to build our homes, schools and hospitals."

The Mufti of Singapore Dr Mohamed Fatris Bakaram spoke out against extremism following news of the arrests. "They contradict the fundamental Islamic teaching of protecting the sanctity of human life and preserving peace and harmony at all times. The safety and peace of Singapore is of paramount interest to the Singapore Muslim community," he said.

"Just as we have shown the beauty of Islam in being able to live with other faith communities, so too should we refrain from intolerance within our own community. Exclusivist and isolationist tendencies will only lead to extreme religious thinking and practice, which is unacceptable and goes against the very essence of Islamic teachings."

Anyone who knows or suspects that a person has been radicalised, or is engaging in extremist activities or propagating extremist teachings, should promptly inform the Internal Security Department at 1800-2626 473 or the police by calling 999, said the MHA.

DHAKA: Bangladesh police will charge 14 men with membership of a banned group after Singapore deported them for suspected militant links last year, a senior police official said on Thursday (Jan 21).

The case comes amid rising concerns over the growth of Islamist militancy in the South Asian nation, which saw a string of deadly attacks on secular writers, minorities and foreigners last year. The suspects were among a batch of 27 construction workers that Singapore accused of having links to Islamist groups including al-Qaeda and Islamic State.

Police said they had found no evidence of links to al-Qaeda and Islamic State, but that 14 of the men were members of a banned group blamed for attacks on five secular bloggers, including a publisher, last year. "They are linked with banned Islamist militant group Ansarullah Bangla Team (ABT)," police spokesman Maruf Hussain Sarder told Reuters on Thursday.

Of the other men, one remains in prison in Singapore and the other 12 have been released in Bangladesh after they were deported. Sarder said the 12 remained under observation and had promised to cooperate with police. "We will keep vigilant watch on them. All 12 gave us a written commitment that when ever we ask them a question they will respond," Sarder said.

Bangladesh has suffered a wave of Islamist militant violence in recent months, including a series of bomb attacks on the mosques of minority Muslim sects and Hindu temples. Islamic State militants claimed the killings of a Japanese citizen, an Italian aid worker and a policeman.


The government has denied that Islamic State has a presence in the country of 160 million people and blamed the attacks on home-grown Islamist militants. Last month six people were wounded in a bombing at a mosque inside a naval base in the port city of Chittagong, the first militant attack on a mosque used by the country's Sunni majority. 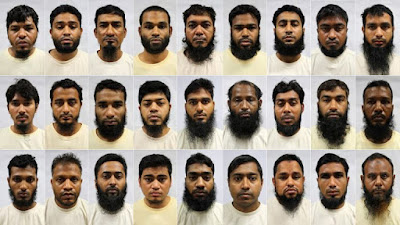