(Andrew McCarthy’s Article direct from The NATIONAL REVIEW on 09 January 2016.)

Nor is it only Cologne. That was just Ground Zero of the New Year’s Eve rape jihad in Germany. As National Review’s Ian Tuttle notes in an alarming column about the predictable — and, if I may say, predicted — surge of sexual assault in a Europe overrun by “so-called Muslim refugees” now widely known as Rapefugees the jihad included similar episodes, albeit on a smaller scale, in Stuttgart, Hamburg, and even astride the Brandenburg gate in Berlin.

We are finally learning about the magnitude and harrowing details of the attack after days of Stasi-like information suppression. Chancellor Angela Merkel (a closet Socialist from former GDR) may not be big on German security, but she is a bulwark when it comes to fantasy Islam.

First there was no news; then, a few disturbing hints of gropings and robberies by gangs of “Middle Eastern or North African” men. Now, we know it was a mass atrocity — the only remaining question being: How massive?

Upward of a thousand men, overwhelmingly Muslim, executed a coordinated series of attacks on an obvious target of opportunity: street celebrations in the major cities of a reviled Western state, where they were certain to find throngs of young women and a police presence grossly inadequate to provide security — certainly not against a critical mass of Islamic supremacists.

The participation of Muslim migrants in the rape jihad is, of course, the fact most desperately suppressed by German officials. Mrs. Merkel earned her “Person of the Year” honors from left-leaning relic Time magazine by rolling out the red carpet for a staggering 1.1 million migrants in 2015 — infuriating the German public and spurring the migrant tsunami now washing over neighboring countries.

In this information clampdown and total news blackout, the nightmare of the victimized women turns out to be the chancellor’s good fortune: Police on the scene were so outnumbered and outmaneuvered by the assailants that it was physically impossible for them to get near most of the women being savaged, much less make arrests. Most of the perps will never be identified.

The media are already using this to cast doubt on migrant culpability. “It was not clear,” the pro-left New York Times opaquely explains, “that any of the men involved were among those who arrived in Germany over the past year from conflicts in Syria, Iraq, Afghanistan and elsewhere.” Sure. In southern Germany, after two teenage girls (ages 14 and 15) were raped, police tripped over themselves to announce that the three Syrians arrested were not recently arrived asylum seekers. What a relief.

Nearly 200 women have filed criminal complaints in Cologne, the vast majority charging all manner of sexual assault. There have been few arrests, though, and nearly none involving sex crimes.

The Muslim men used a tactic that has escaped the notice of fantasy Islam devotees but is well known to those of us who’ve followed the scant reports on the rape jihad as it has proceeded from Tahrir Square to Malmö to Rotherham: A group of men encircles the targeted woman or girl, trapping her while walling off police and other would-be rescuers. Knowing they are a protected class, the Muslim men have no fear of the cops — “You can’t do anything to me,” and “Mrs. Merkel invited me here,” are just some of the reported taunts.

By the time “help” reaches one victim, the assailants have moved on to the next. It is not very effective law enforcement . . . but at least the cops can’t be accused of “Islamophobia,” right?  Europe is not Nigeria — not yet.

In the regressing advanced world, nothing on the scale of the New Year’s Eve siege can happen without tweets and pictures filtering out. Try as they might, German officials have been unable to put a lid on accounts from police explaining that “the large majority” of assailants they were able to identify were “from Syria,” or observing that “there were thousands of people who could not be specifically identified but who had an immigrant background, and were most probably refugees.”

Truth being the first casualty of war, it was left to Henriette Reker, the fantasy Islam–drenched mayor of Cologne, to blame the victims for their ordeal. Such assaults could be prevented, she declaimed, if German women adopted a “code of conduct” tailored to the new, multi-culti Deutschland.

In the spirit of multiculturalism, I have such a code just off the shelf (on which rests The Grand Jihad, in which I outlined it a few years back). It goes like this: To be absolved from guilt, the raped woman must have shown some sort of good conduct . . . Islam addresses women to maintain their modesty, so as not to open the door for evil . . . The Koran calls on Muslim women in general to preserve their dignity and modesty, just to save themselves from any harassment. So for a rape victim to be absolved from guilt, she must not be the one that opens . . . her dignity for deflowering. 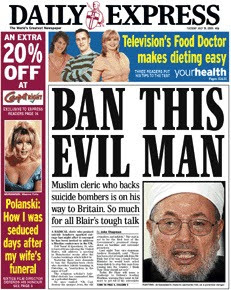 These pearls of wisdom come from none other than Sheikh Yusuf al-Qaradawi, the Muslim Brotherhood’s renowned sharia jurist. He proclaimed them on his popular IslamOnline website about a dozen years ago, right before he was welcomed into Britain — as a trustee of the Oxford Centre for Islamic Studies — despite his fatwas supporting Hamas suicide attacks in Israel and terrorism against Western troops in Iraq.

Though he resides in Qatar, Qaradawi currently heads the Ireland-based European Council for Fatwa and Research. Qaradawi is the most influential Muslim intellectual behind the strategy of, as he puts it, “conquering” Europe and America by “dawa” — the aggressive proselytism of Islamic mores.

The plan calls for flooding the West with Muslim migrants, directing them to resist assimilation, establishing Islamic enclaves, and pressuring the host country to concede the enclave’s right to govern itself in accordance with sharia — Islam’s societal framework and legal code.

As I’ve previously explained, when Muslims are seeking conquest, Islamic scripture endorses sexual assault as a weapon to establish their dominance. “O Prophet,” Allah is said to have announced (in the Koran’s sura 33:50), “We have made lawful to thee thy wives to whom thou has paid their dowers, and those whom thy right hand possesses out of the captives of war whom Allah has assigned to thee.” 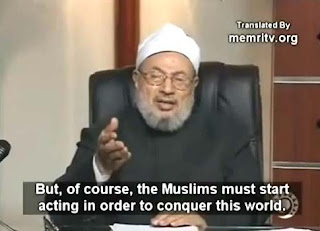 The rest of us will know that there is a strategy: conquest. Just as in the Middle East, women and girls in the West are the spoils of jihad, the vehicle for intimidating non-Muslims into surrendering sovereignty over the streets. If they want to be safe, Sheikh Qaradawi warns, they must submit to Islam’s sartorial suffocation. If not, well, they have it coming.

By the way, since President Obama entered office, the United States has issued over 100,000 green cards per year to migrants from Muslim-majority countries. That’s just green cards — it doesn’t count the thousands of visas issued to students, tourists, and temporary workers. With the Republican-controlled Congress fully funding the effort, the government is on pace to award another 680,000 green cards to Muslim migrants — with their entitlement to lifetime residency, federal benefits, and a path to citizenship — in the next five years.

As Sheikh Qaradawi and Mayor Reker might say, I’m sure it won’t be a problem . . . as long as the women “maintain their modesty.” — 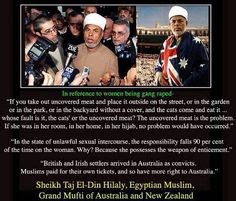