(Staff Article direct from The NEW OBSERVER EUROPE on 26 January 2016.) 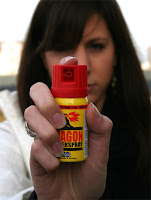 Rapefugee Victim to be Prosecuted for Defending Herself. A 17-year-old Danish girl who used pepper spray to defend herself from a rape attack by a Muslim invader “refugee” in the southern city of Sønderborg will now be prosecuted under the Firearms Act, local police have said. According to the Danish TV channel TV Syd, the 17-year-old was set upon by the Muslim invader at 10 at night.

The attacker, described as a “dark-skinned English-speaking man,” grabbed the girl by the arm and told her in English that she had to come with him. She resisted and pulled herself free, whereupon he pushed her over and jumped on top of her, at the same time unbuttoning her pants in preparation for an attempted rape. The girl managed to pull a pepper spray out of her pocket and sprayed the Muslim man in the face, whereupon he sprang off her and ran away, police spokesman Svend Erik Lassen said.

The case is being investigated as attempted rape, but it is the charges which have now been brought against the girl which have received media attention in Denmark. According to the Danish Firearms Act, it is illegal to possess and use pepper spray—even though it is freely available across the continent and there is no active attempt to prevent its importation, as the Sønderborg case shows. Possession of pepper spray can result in fines and up to three months in prison.


Sønderborg lies on the German border, and it is likely that the victim obtained the pepper spray in Germany, where sales of the self-defense spray have rocketed following the ever-increasing rapefugee sex attacks on white women.

“It is illegal to be in possession of, and using pepper spray, so she probably will be charged,” the head of the Sønderborg police, Knud Kirste, told TV Syd. He would not say whether the indictment could be waived because of extenuating circumstances of self-defense.

According to the Danish tabloid BT, police are already investigating a link between the attack and “problems with the local asylum seekers who have attacked other girls” in the city at night.

A local nightclub owner in Sønderborg told BT that ever since a former military barracks in the town had been transformed into an “asylum center,” the sexual harassment had started at the nightspots.

Another article revealed that in the wake of the news about the Sønderborg  attack, many other complaints have been received about sexual harassment carried out by Muslim invader “refugees” in Thisted, where a new “asylum center” housing 400 nonwhites was built only two months ago. There are now so many “harassment problems in the city” that the council’s children and family director, Lars Sloth, said that “preventative measures” have had to be taken.


He did not say what these measures were, but said that “Thisted recognizes that there is a problem in relation to several girls in nightspots having been harassed by the city’s refugees.” In addition, media said, there have also been a number of clashes between “citizens and asylum seekers” after several young women were harassed. 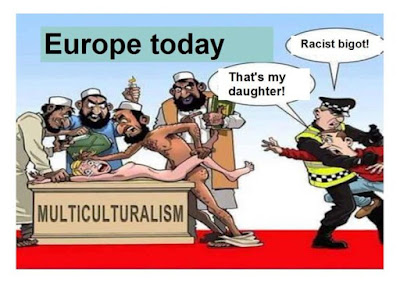