(Robert Spencer’s Article from The JIHAD WATCH on 20 January 2016.)

Why did this happen? Did someone at the monastery draw Muhammad? Did some Iraqi cleric provoke the poor dears, poking them in the eye in some way, and failing to show proper respect for Islam? As far as Western Christian leaders are concerned, the Christians of Iraq have no one but themselves to blame for this sort of thing.

“Our Christian history in Mosul is being barbarically leveled,” said Iraq-based Catholic priest Rev Paul Thabit Habib. “We see it as an attempt to expel us from Iraq, eliminating and finishing our existence in this land.” If only the Christians had devoted themselves more assiduously to “dialogue”! Then none of this would have happened!

The Isis jihadist group has completely destroyed a 1,400-year-old Christian monastery in Iraq, the oldest of its kind in the country. Satellite images released on Wednesday by the Associated Press showed just a pile of rubble where St Elijah’s Monastery used to stand on a hill above Mosul, Isis’s stronghold in Iraq.

The monastery had survived as a place of Christian worship for almost one-and-a-half millenia, predating Islam itself, and had only suffered superficial damage throughout the country’s most recent conflicts.


An historically significant site, the partially restored 27,000-square-foot stone building had 26 distinct rooms including a sanctuary and chapel. It still had niches where monks used to tuck candles, and the fourth century Greek “Chi-Rho” symbol, representing the name of Christ, was still visible carved into its right gatepost.

The site was recently used as a place of worship for US troops in Iraq, but fell into Isis hands in June 2014. This month, AP reported, satellite images commissioned from the firm DigitalGlobe confirmed what local antiquities experts have feared for some time.

“Our Christian history in Mosul is being barbarically leveled,” said Iraq-based Catholic priest Rev Paul Thabit Habib. “We see it as an attempt to expel us from Iraq, eliminating and finishing our existence in this land.”

The demolition itself appears to have taken place at some point between August and September 2014, image analyst Stephen Wood told AP. Images show the stone walls “have been literally pulverized”, he said. “Bulldozers, heavy equipment, sledgehammers, possibly explosives turned those stone walls into this field of gray-white dust. They destroyed it completely.”

Isis has sought to destroy sites like St Elijah’s Monastery (Dair Mar Elia in Arabic) across Syria and Iraq since its reign of terror began in earnest in early 2013. The group seeks to wipe out non-Islamic history, calling all religious shrines even to other sects within Islam idolatrous.


Most infamously, it has destroyed whole swathes of the ancient city of Palmyra in Syria since it overran it in August 2015. The terror group has blown up three tower tombs in the city and in September destroyed the 2,000-year-old Temple of Bel by filling it with explosions leaving a solitary arch standing. This came after they destroyed the Temple of Baalahamin. 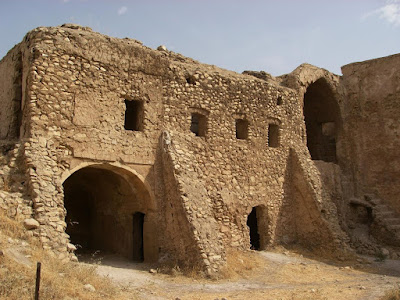 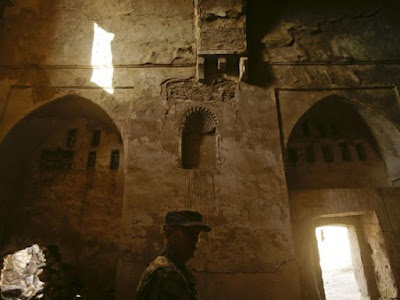 After a 1,400-year-old Iraqi Christian monastery was recently destroyed by the Islamic State (ISIS) most of the world condemned the demolition — except for spokesman for the U.S. military’s Operation Inherent Resolve, Col. Steve Warren.

“Thousands [of Iraqi Christians] have been killed, hundreds of thousands have been forced to flee,” noted CNN’s Wolf Blitzer in an interview with Col. Warren last week.  “There is legitimate fear – you’re there in Baghdad – that the long history of Christians living peacefully, productively in Iraq, is coming to an end.  How worried should we be about the Christian community in Iraq?”

The response: “Wolf, ISIL doesn’t care if you’re a Christian … We’ve seen no specific evidence of a specific targeting towards Christians.”

Wrong:  Roughly two-thirds of Iraq’s 1.5 million Christian citizens have been killed or forced to flee the country by ISIS and its jihadi predecessors over the past decade—and this has everything to do with their religious identity.

In Iraq and everywhere else it has conquered, ISIS has, at a minimum, rigorously enforced on pain of death Islam’s dhimmi laws, which require Christians to pay extortion money (jizya) and agree to live by a set of degrading rules.

Often, ISIS fighters skip these formalities and simply torture to death Christians who refuse to convert to Islam, sometimes releasing the footage online for propaganda purposes. Most notable are two videotaped mass executions of 21 Egyptians and 30 Ethiopians in Libya last spring, but there have been many lesser-known cases.

When a group of Iraqi Christian children refused to renounce Christ in 2014, saying “No, we love Jesus,” ISIS decapitated and mangled their bodies.  Last summer in Aleppo, Syria, ISIS tortured, mutilated, publicly raped, beheaded and crucified 12 Christians for refusing to convert.  Escaped eyewitnesses have reported ISIS places Iraqi and Syrian Christians in cages or coffins and sets them on fire.

ISIS has frequently kidnapped Christians and demanded ransom payments for their release, often forcing female captives into sexual slavery. A 12-year-old girl, raped by an Islamic State fighter, was told that “what he was about to do was not a sin” because she “practiced a religion other than Islam.” ISIS has even sent operatives disguised as refugees into U.N. refugee camps in Jordan to kidnap young Christian girls to sell or use as slaves.

The Islamic State is committed to expunging all physical traces of Christianity in areas it conquers, demolishing dozens of ancient churches—in Syria alone, up to 400 churches have been destroyed since the war—not to mention countless crucifixes, statues, graves, and other relics.  It  ordered the University of Mosul to burn all books written by Christians and decreed that all schools in Mosul and the Nineveh Plain that bore Christian names (some since the 1700s) be changed.

In short, Christians are certainly experiencing “specific targeting” by the Islamic State.  While ISIS has also killed Muslims who get in its way, only non-Muslims—chief among them Christians—are being enslaved, raped, and forced on pain of death to convert to Islam.  Although Islamic law, or Sharia, legitimizes the killing, enslavement, and rape of non-Muslims, it prohibits treating fellow Muslims accordingly.

Few informed observers dispute that the Iraqi Christian community is gravely and specifically threatened by ISIS. According to the Simon-Skjodt Center for the Prevention of Genocide at the U.S. Holocaust Memorial, ISIS persecution of Christians “fits the definition of ethnic cleansing.” Even David Saperstein, the United States ambassador at large for religious freedom, acknowledges that it is “primarily Christians” being persecuted in Iraq for their faith.

For the official spokesman of the U.S. military’s fight against ISIS to make such clueless and callous remarks to the contrary is deeply disconcerting.  But perhaps Col. Warren is not to blame—perhaps he’s just a military man doing his best to comply with demands from politicians upstairs that he say nothing to acknowledge the suffering of Mideast Christians.