US-born Pakistani shooter in California massacre was in touch with other terror subjects. Syed Rizwan Farook, who killed 14 people in San Bernardino during a shooting rampage with his wife, visited Pakistan lat year and was in contact with more than one international terrorism subject whom the FBI was already investigating, sources and officials said on Thursday.

“He was in touch with others here that the FBI was looking at, and he very well could have been radicalized. But I’m not sure how major those other targets are,” the source said. Other law enforcement sources told CNN that Farook’s apparent radicalization contributed to his motive, but that other things — like workplace grievances — also may have played a role. He contacted the terrorism subject via social media and over the phone, CNN reported.

Farook traveled to Saudi Arabia two years ago as part of a hajj pilgrimage, which devout Muslims are required to do at some point in their lives, according to law enforcement sources. Farook also visited Pakistan last year, according to David Bowdich, the assistant FBI director in charge of the Los Angeles office.


In July 2014, Farook returned to the US from Pakistan with his future wife, Tashfeen Malik, who entered the country on a K-1 or fiancée visa on her Pakistani passport, The New York Times reported.

Meanwhile, San Bernardino Police Chief Jarrod Burguan said Thursday that Farook and Malik, fired as many as 75 rifle rounds at the scene and left behind an explosive device rigged with three pipe bombs with a remote-control device – though it failed to detonate. It apparently malfunctioned, Burguan said at the latest press conference.

The couple, who wore tactical vests but not ballistic gear, had over 1,600 more bullets — .223-caliber and 9mm — with them when they were gunned down later in their SUV, the chief said. At their home, they had 12 pipe bombs, tools for making additional explosives and more than 3,000 rounds of ammunition, Burguan said.

“Clearly they were equipped and they could have done another attack. We intercepted them before they could have done that,” he said. The number of injured in the bloodbath was raised to 21 from 17, he said. Among them are two police officers who were wounded during the final shootout. One was hit in the leg and the other suffered glass cuts. Their injuries are not life-threatening.

Authorities also are investigating a trove of thumb drives, computers and cellphones retrieved from their home to see if the duo visited jihadist websites or contacted any radicals. The chief said Farook did not have a criminal record. “He was not on our radar screen,” he said — adding that authorities still do not have a motive for the shooting.

Authorities are investigating the terror links after Farook, 28, shot up his office party Wednesday with Malik, 27. He stormed out in anger from the festivities before returning with Malik — armed to the teeth with legally purchased assault weapons and handguns, and clad in battle-ready tactical gear. Burguan said reports that the murderous duo may have been wearing point-of-view GoPro cameras to record their bloody attack were unfounded.

They sprayed bullets inside a conference room at the Inland Regional Center, a state-run facility for developmental-disability services, slaughtering colleagues who recently had thrown a shower for their new baby. No motive was immediately determined, but the Joint Terrorism Task Force was investigating and the city’s police chief declared early Thursday, “We have not ruled out terrorism.”

“This was not a casual workplace argument,” one law enforcement source told The Post. “It’s a well-planned and thought-out attack.” Burguan also said the two “came in with a purpose — they came in with an intent.” “Preliminary information indicates that these were people that came prepared, that they were dressed and equipped in a way to indicate that they were prepared,” he said.

David Bowdich, the FBI assistant director in Los Angeles, said: “If you look at the preparation, the amount of weapons and ammunition, there was obviously a mission here.” But he added that it was too soon to call the massacre a “terrorist act.”

Hours after the attack, cops went to Farook’s home in nearby Redlands and eventually cornered the SUV, which Burguan said they had rented several days earlier. They had planned return it on the day of the attack, he said. The two were killed in a fierce gun battle with 23 cops, the chief said.

Neighbours Suspected Something Was Going On Next Door

The husband and wife shooters who shot 36 people in San Bernardino in Wednesday had been acting suspiciously in recent weeks, neighbors claim. Syed Rizwan Farook, 28, and Tashfeen Malik, 27, were apparently working late at night in their garage and receiving numerous packages to their home in Redlands, California…

It has since emerged the couple had 12 pipes bombs, a stock pile of tools to assemble explosives, 2,000 9mm rounds, and over 2,500 point-223 rounds in their suburban home.

Aaron Elswick, whose friend lives on the street, told KTLA a neighbor described her regret at not reporting Farook and Malik. ‘Sounds like she didn’t do anything about it,’ Elswick said. ‘She didn’t want to do any kind of racial profiling. She’s like, ‘I didn’t call it in … maybe it was just me thinking something that’s not there.’ 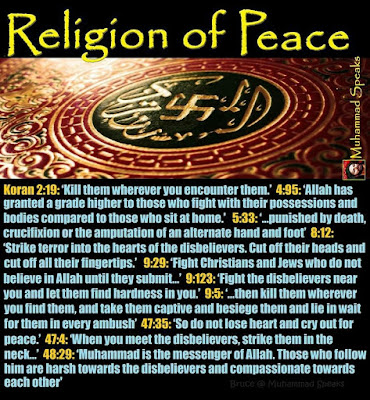 Rifles Were Legally Bought By Someone Else

Farook and Malik bought the 9mm handguns at Annie’s Get Your Gun, a firearms retailer in nearby Corona that advertises itself as a “family-friendly gun store,” a federal law enforcement source told The LA Times. The handguns were bought legally, Burguan said. A person who identified themselves as the owner denied that the store sold the guns to the suspects.

Another person bought the two .223-caliber rifles legally, Burguan said. A federal law enforcement official told USA Today that they were bought in San Diego. Authorities are investigating their unnamed buyer. Meredith Davis of the Bureau of Alcohol, Tobacco, Firearms & Explosives said investigators are working to make a connection to the last legal purchaser. All four guns were bought four years ago.

The rifles involved were powerful enough to pierce the standard protective vest worn by cops, she said. California requires paperwork when guns change hands privately but many other states don’t, she added.

By all accounts, Farook was leading the “American dream” as the married, US-born son of immigrants, with college degrees, a middle-class job and a newborn daughter. He and his young wife also apparently posted an online baby registry a few months before their final act.

The two had met online, according to his co-workers at the San Bernardino County Department of Public Health, where he worked as an environmental health specialist. She became a naturalized citizen when she married Farook two years ago.

Colleague Patrick Baccari said Farook was “living the American dream.” Baccari told the LA Times he saw Farook at the department’s holiday luncheon, from which the soon-to-be killer vanished just before a staff picture was taken. “I guess he’s missing the photo this year,” Baccari said he recalled thinking.

In a Muslim-oriented dating website, Farook called himself a 6-foot-tall, “healthy, safety and environmental inspector,” according to ABC News. The then-single Farook also noted that he didn’t smoke or drink. Farook claimed he grew up in Chicago in a “religios [sic] but modern family of 4” and that he enjoyed “doing target practice with younger sister and friends” in his backyard. Both Farook and Malik were of Pakistani descent.

A man named “Syed Rizwan Farook” last went to school in 2013, at nearby Cal State Fullerton. Farook attended for one semester in the graduate program for environmental engineering, but he never attained his graduate degree, school records showed. “We do not know and cannot confirm whether this is the same individual referenced in today’s news reports,” university spokeswoman Paula Selleck told the Riverside Press-Enterprise.

The couple’s loved ones can’t understand how they flipped out. “I am in shock,” Farook’s brother-in-law Farhan Khan told reporters at a hastily called press conference at the Council on American-Islamic Relations in nearby Anaheim. “We all are just completely shocked. We had no idea something like this could happen.”

In another development, it emerged that Farook’s life while living with his parents was troubled. In 2006 divorce filings, his mother detailed a violent marital history in which her children often had to intervene. Rafia Farook said her husband of 24 years was physically and verbally abusive and was “negligent and an alcoholic,” according to documents filed in Riverside County Superior Court.

Her husband, she said, forced her and three of her children to move out. They moved into an Irvine residence. Later, in multiple requests for domestic-violence protection, Rafia Farook detailed the maltreatment she said she encountered and that her kids witnessed: Her husband had once drunkenly dropped a TV on her. Another time, he pushed her toward a car.

After a drunken slumber, he shouted expletives and threw dishes in the kitchen. “Inside the house he tried to hit me. My daughter came in between to save me,” she said about one incident. Police were not called to the home, she said. “He is always mad,” she said. “Screaming on me, shouting at my kids for no reason. … My son came in between to save me.” It was unclear if she was referring to Syed Rizwan Farook, who at the time was 19 and living with her, according to documents.


Meanwhile, 10 shooting victims are being treated at two hospitals. San Bernardino County spokeswoman Felisa Cardona told The AP that all five patients at Arrowhead Regional Medical Center were in stable condition Thursday morning. One other patient left the hospital after being treated Wednesday, she said. Loma Linda University Medical Center is treating five patients — two in critical condition and three in fair condition, CEO Kerry Heinrich said. US Attorney General Loretta Lynch said the Justice Department will be offering “any and all assistance necessary” as the investigation continues. 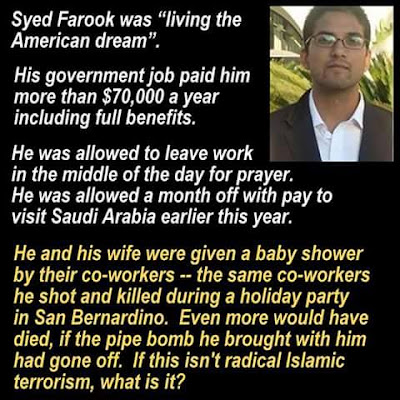