(Compilation of three articles from the NEW YORK POST on 6-7 December 2015.) 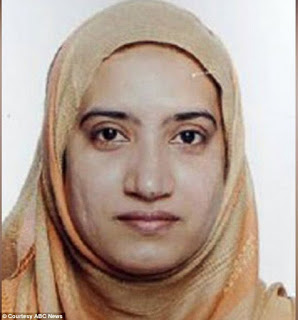 ‘She was a honey trap’: Wife led the charge in California massacre. Islamic State-follower Tashfeen Malik fired the first shots in last week’s deadly attack on southern California government workers — not her husband — leading investigators to consider that she might have been a “honey trap” and the real brains of their terrorist assault.

And not only did Malik squeeze off initial rounds in the slaughter of 14 innocent people in San Bernardino, Calif. witnesses said her hubby, Syed Rizwan Farook, appeared to “hesitate” before joining in the bloodbath, witnesses have told intelligence officials, The Sunday Times of London reported.

Malik went to the left and Farook to the right, when they entered a large conference room of the Island Regional Center in San Bernardino, witnesses said. She took a firing “stance” with her long gun and opened fire on workers gathered near a Christmas tree while Farook appeared to hold back – either losing his nerve or looking for a specific target – before he started to shoot, The Times reported. The two quickly left the scene before cops arrived.


As Farook drove their black Expedition, Malik crouched in the back seat and opened fire on pursuing police. Before they were killed by cops, Farook and Malik fired 76 rounds during the chase while police squeezed off 380 shots.

Malik’s potential lead role in the slaughter has FBI officials believing Farook might have been led into jihad by a “honey trap” wife who sought him out as a potential terror accomplice. Farook had frequented dating Web sites and told friends he met Malik online.

Christian Nwadike, a colleague of Farook who barely escaped death last week, said he noticed a change in him after his marriage to Malik. Now looking back, Nwadike said: “I think he married a terrorist.”

The last meal Malik and Farook enjoyed in their home was orange juice and paratha bread – and perhaps a dose of Adderall and Xanax, investigators said. The drugs, meant to increase focus and calm nerves, were found near where the murderous duo had their last meal. 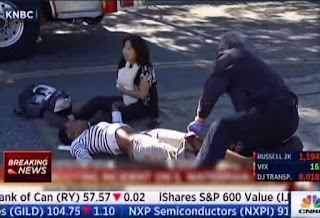 This could have been an ordinary antidote for stressed out young parents with a baby girl. But those bottles of medication found near their final meal added a disturbing new detail to Wednesday’s slaughter. Prayer beads sit among other personal effects in the home Malik and Farook shared.

Meanwhile, Saudi Arabia on Sunday sought to distance itself from last week’s mass murder. Saudi Interior Ministry spokesman Maj. Gen. Mansour Al-Turki said there’s no indication Malik was radicalized in Saudi Arabia. Al-Turki said Saudi records show she was not a resident of Saudi Arabia and had been to the kingdom only twice in her life.

On both trips, she came to visit her family, once in 2008 for several weeks and the second time in 2013 for four months. Farook, an American-born son of Pakistani immigrants, reportedly tied the knot with Malik in Saudi Arabia.

Killer wife was ‘a normal person’ — then became a terrorist

Tashfeen Malik transformed from a top college student to one of America’s worst killers. The 29-year-old female shooter involved in last week’s bloodbath in San Bernardino was remembered as just a “modern girl” at the Pakistani university she attended. 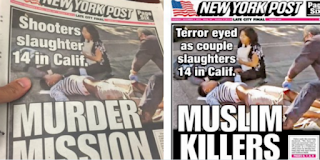 “She was religious, but a very normal person as well,” Dr. Nisar Hussain, a professor at Bahauddin Zakariya University told The Los Angeles Times. “She was an obedient girl. I cannot even imagine she could murder people.”

But by the time she came to the US last year, Malik was posting extremist messages on social media and alarming members of her family back in Pakistan — a change they said happened during her college years.

“She started taking part in religious activities and also started asking women in the family and the locality to become good Muslims,” an anonymous family member told the Los Angeles Times. The relative, who lives in Malik’s Pakistani hometown of Karor Lal Esan, said she also used to spend evenings chatting with someone in Arabic over the Internet. “None of our family members in Pakistan know Arabic, so we do not know what she used to discuss,” the family member said.

The online world also introduced Malik to Syed Rizwan Farook, her future husband and co-conspirator in last Wednesday’s rampage. The two later married in Saudi Arabia before Malik came to California on fiancé visa, which requires a US government background check and acts as a temporary green card.

Her final Facebook post was a pledge to ISIS’s leader Abu Bakr al-Baghdadi shortly before she entered the conference room with her husband — both clad in tactical gear and armed with semi-automatic weapons — and sprayed bullets at his coworkers. The couple murdered 14 and injured 21 before they were killed in a shootout with police.

Terrorists had ‘target practice’ prior to mass murder: FBI 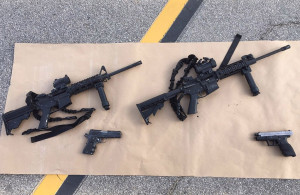 Syed Rizwan Farook spent several hours at the Riverside Magnum Shooting range on Nov. 29 and Nov. 30, practicing with his own AR-15 assault rifle and handgun — the same type of weapons used during the Wednesdaymassacre, a federal law enforcement source said.

Investigators also believe that Farook and his jihadi wife, Tashfeen Malik, had been “dry-firing” — pulling the trigger of an unloaded gun — in the backyard of a Southern California home as they prepared for the terror spree, the source said.


Meanwhile, federal sources said that all of Farook’s family members and friends are being looked at as the terror investigation continues. “The mom definitely has exposure as a potential co-conspirator,” a federal source said. “We are trying to uncover any evidence of her possible involvement which could lead to charges.” Bowdich said that both Malik and Farook were “radicalized,” adding that they “have been for quite some time.”


Malik Was Radicalized In As Early As 2013

Pakistani Muslim Tashfeen Malik the San Bernardino shooter came to the United States with the intention of carrying out a terrorist attack, FBI director James Comey told Congress on Wednesday. Comey said he doesn’t know if a terrorist group arranged the marriage between the two attackers, but said that Tashfeen Malik had jihadist goals as early as 2013.

“The intelligence indicates that she was [radicalized] before she connected with the other killer and came here,” he said during a Senate Judiciary Committee hearing this morning. Comey’s revelation comes in the midst of a debate over President Obama’s pledge to bring 10,000 Syrian refugees to the United States, as lawmakers and governors question the efficacy of Department of Homeland Security screening procedures.

It rattled even Democratic lawmakers on the committee who have defended Obama’s policies. “After this hearing today, every American is going to be asking the question: How did this woman come in on a visa . . . if she was talking publicly (again, we’ll get into ‘privately’ in the classified briefing) about jihad?” said New York senator Chuck Schumer, the Democratic leader-in-waiting.

“Shouldn’t that be somehow tied into our visa program?” After clarifying that Schumer was asking about the visa-vetting process, Comey demurred. “I don’t know enough to say, because I don’t know exactly what investment would have to be made to do that work and what the payoff would be on the other side,” he said.

Senator Minority Whip Dick Durbin (D., Ill.) raised a similar question about the screening process after Comey told him that Malik had jihadist sympathies even “prior to the rise of ISIL.”

“Do you see any weakness in our system when it comes to visas or fiancée visas that that sort of information was not known to us before she was granted access to America?” Durbin asked. “I don’t know enough to say,” Comey replied.

His testimony plays into the hands of conservatives such as Senator Ted Cruz (R., Texas), who cited the Malik case to justify his proposals to suspend the resttlement of refugees from Syria and other countries with significant jihadist movements. “The vetting for the fiancée visa was the very same vetting that President Obama tells us will keep us safe from ISIS terrorists coming from Syria,” the GOP presidential hopeful told reporters Tuesday.