On 31 March 2016, a tribunal set up by the Indian government upheld a ban on the National Socialist Council of Nagaland (Khaplang) (NSCN(K)) for five years. The case pertains to the 4 June 2015 attacks carried out by NSCN(K) insurgents on Indian military personnel, which claimed the lives of 18 Indian soldiers.

NSCN(K) is a factional offshoot of the NSCN, a group formed in 1980, dedicated to creating a sovereign nation for the Naga people carved out of Indian and Myanmar territories. It came into existence in 1988 under the leadership of Sangwang Sangnyu Khaplang, a Myanmar national. The tribunal’s decision is another step forward in meeting the strategic objective to cap and eliminate the cross-border insurgency affecting the northeastern states of India.

On 6 November 2015, the Indian government declared NSCN(K) a terrorist organisation. That September, the government had banned NSCN(K) as an ‘unlawful organisation’ under the Unlawful Activities (Prevention) Act, 1967. The group has been involved in as many as six attacks on civilians and security forces, including the deadly June 2015 attacks.


What makes NSCN(K) militarily and logistically stronger than other organisations is that it has been receiving supplies smuggled across the porous India–Myanmar border, with possible links to other countries and local Myanmar authorities.

In strategic terms, NSCN(K) have made three cardinal mistakes weakening its positions in India and Myanmar to the advantage of the two countries’ governments.

First, the organisation unilaterally abrogated a ceasefire with the Indian government in March 2015. The government also called off the ceasefire in April that year.

Second, after attacking the Indian army convoy in June, NSCN(K) and United Liberation Front of Western Southeast Asia (UNLFW) leaders expressed the desire to establish a government in exile. That injected a sense of urgency in the Indian establishment’s approach in dealing with the group. In July, India requested the help of Myanmar’s government in capturing four major NSCN(K) leaders during the first-ever India–Myanmar Joint Consultative Committee meeting. India’s decision to term NSCN(K) illegal, and later a terrorist organisation, should be seen in this context.

Finally, in another strategic blunder, NSCN(K) decided not to join the Nationwide Ceasefire Agreement (NCA) signed by the Myanmar government and eight armed ethnic groups on 15 October 2015. This has given India the opportunity to work closely with Myanmar in dealing with the NSCN(K).

According to some media reports, the Tatmadaw — the Myanmar military — has been planning to systematically target the ethnic rebels who are not part of the NCA. But other observers argue that the Tatmadaw has different priorities than specifically targeting NSCN(K). 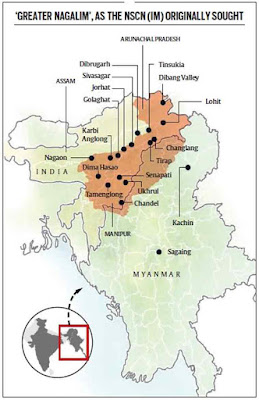 The decision to declare NSCN(K) a terrorist organisation means the group will not be able to operate as freely as it used to in the insurgency-infested states of northeast India. This also means that India may try to capture and extradite NSCN(K) leaders and cadres to India and try them in a court of law. Considering India’s recent successes in negotiating extradition agreements with Bangladesh, Thailand, Indonesia and Malaysia, the decision could create panic in NSCN(K).

India has not concluded an extradition treaty with the Myanmar government yet. Such a treaty should be pursued expeditiously. The lack of a systematic policy on extradition with each of its immediate neighbours, particularly on the eastern side, has been India’s strategic mistake in handling insurgency, terrorism and other transnational crime.

It is clear that the government is pushing the insurgent group into a corner. A well-calculated effort from India led to the signing of a framework agreement with the NSCN(IM) — the National Socialist Council of Nagaland (Isak Muivah), the largest Naga armed group — on 3 August 2015. While details of the agreement have not yet been made public, the segregation and differentiation between the different insurgent groups is a step forward.

Recent changes in Myanmar highlight the success and influence of the Indian government’s approach. In 2012, when the Myanmar government signed an autonomy agreement with NSCN(K), India was not even informed. But when the ceasefire agreement was signed between Myanmar and ethnic rebel groups in October 2015, New Delhi was not only briefed but India’s National Security Advisor Ajit Doval was also present.

Myanmar authorities have showed diplomatic acumen and maturity in dealing with India’s ‘hot pursuit’ along the Indo-Myanmar border. The Indian security establishment seems to be cognisant that unless it keeps its eastern neighbours Myanmar and Bangladesh in confidence, capping and eliminating insurgency would be a daunting task.

India’s next step should be to execute anti-terror operations while seeking the support of the Naga Hoho — the Naga people’s apex political body — and Naga civil society groups such as the Naga Mothers’ Association.

It remains to be seen how the new political dispensation in Myanmar, led by President Htin Kyaw, and Aung San Suu Kyi, will handle the complex issue of ethnic reconciliation, particularly in north and northwest Myanmar. While the new government has already announced the establishment of an ethnic affairs ministry, this is unlikely to change much. The Tatmadaw will still be in a strong position, with ministries of defence, interior and border security under its control.

India should try to initiate comprehensive dialogue with various Naga groups, including NSCN(K). While violence must be met with effective countermeasures, peaceful behaviour should be reinforced. Together, these steps might lead NSCN(K) to restart ceasefire negotiations through unofficial channels.

Smart monitoring of rebel insurgent groups is essential. India should move to cut off the external links and supply sources of insurgent groups and provide Indian security forces with the necessary wherewithal to effectively combat insurgency. If the Indian government can coordinate these strategies, they will be far closer to achieving the long-cherished goal of an insurgency-free northeast India.

Making sense of the Naga insurgency

The primary demand of the NSCN (National Socialist Council of Nagaland) has been Greater Nagaland which envisages bringing all Naga-inhabited areas under one administrative umbrella.

The Nagas first revolted against the Indian government on August 14, 1947, led by Angami Zapu Phizo of the Naga National Council (NNC). In July 1948, Phizo was arrested and released next year. He became the president of NNC in 1950 and publicly resolved to establish a sovereign Naga state.

Phizo's meeting with the then prime minister Jawaharlal Nehru in 1952 did not bear any fruit and four years later he formed an underground government called the Naga Federal Government (NFG) and a Naga Federal Army (NFA). In April 1956, the Central government sent the Army to crush the mutiny in what was, till then, the Naga Hills District of Assam. Phizo escaped to the then East Pakistan in December 1956 and then to London in June 1960.

Following sporadic violent agitations by Naga insurgents, Nagaland was given statehood on December 1, 1963. The NNC continued its armed struggle and in 1972, the Centre banned it under the Unlawful Activities (Prevention) Act. The security forces launched a massive counter-insurgency operation which brought the militants to the negotiating table.

On November 11, 1975, the NNC signed the historic Shillong Accord, accepted the Indian Constitution and agreed to surrender their weapons. In August 1976, T Muivah, a former general secretary of the NNC, convened a national assembly where he rejected the Shillong Accord as the “work of traitors”. In 1980, he, along with Isak Chisi Swu and SS Khaplang formed the National Socialist Council of Nagaland (NSCN).

The goal and territorial influence

The primary demand of the NSCN has been Greater Nagaland which envisages bringing all Naga-inhabited areas under one administrative umbrella. The outfit aims to establish a People's Republic of Nagaland based on the principle of socialism for economic development with the spiritual outlook, "Nagaland for Christ".

Apart from Nagaland, its influence is seen in four districts of Manipur - Senapati, Ukhrul, Chandel and Tamenglong. It has also been able to extend its influence to the Naga-inhabited areas of North Cachar Hills and Karbi Anglong districts of Assam and some parts of Arunanchal Pradesh.

The Nagas comprise 17 major tribes and over 20 sub-tribes. Naturally, they had always been divided along clan and tribal lines. The majority of the rank and file of the NSCN was from the Konyak tribe, while the top leadership came from the Tangkhuls. There were apprehensions among the Konyaks and the Myanmerese Nagas that the Tangkhuls were about to strike a deal with the Central government.

The NSCN split into two groups in 1988 - the Konyaks formed NSCN(K) under the leadership of Khole Konyak and SS Khaplang, a Hemie Naga from Myanmar, while NSCN(I-M) under Isak Swu, a Sema from Nagaland, and Muivah, a Tangkhul from Manipur represented the Tangkhuls.