(James Dellingpole’s Article direct from The BREIBART NEWS on 30 March 2016.)

Europe’s suicidal green energy policies are killing at least 40,000 people a year. That’s just the number estimated to have died in the winter of 2014 because they were unable to afford fuel bills driven artificially high by renewable energy tariffs.

But the real death toll will certainly be much higher when you take into account the air pollution caused when Germany decided to abandon nuclear power after Fukushima and ramp up its coal-burning instead; and also when you consider the massive increase in diesel pollution –  the result of EU-driven anti-CO2 policies – which may be responsible for as many as 500,000 deaths a year.

But even that 40,000 figure is disgraceful enough, given that fascist greenies are always trying to take the moral high ground and tell us that people who oppose their policies are uncaring and selfish.


It comes from an article in the German online magazine FOCUS about Energiewende (Energy Transition) – the disastrous policy I mentioned earlier this week whereby Germany is committed to abandoning cheap, effective fossil fuel power and converting its economy to expensive, inefficient renewables (aka unreliables) instead.


According to FOCUS around ten percent of the European population are now living in ‘energy poverty’ because electricity prices have risen, on average, by 42 percent in the last eight years. In Germany alone this amounts to seven million households.

The reason, of course, is that green energy policies have made it that way. Many of these have emanated from the European Union, which in turn has taken its cue from the most Green-infested nation in Europe – Germany. 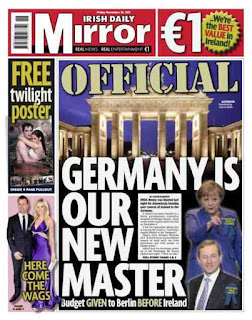 Germany has long been obsessed with all things environmental. Besides having invented the dodgy ‘science’ of ecology in the 1880s it was also, of course, between 1933 and 1945 the home of Europe’s official “Greenest government ever” – the first to ban smoking on public transport, an enthusiastic supporter of organic food, national parks and population control.

The Greens have also since the early Eighties been arguably the most influential party in Germany. Though their percentage of the vote has rarely risen above the 10 percent mark, they have punched above their weight either as a coalition partner in government or as a pressure group outside it.

For example, the reason that after Fukushima, Chancellor Angela Merkel completely changed Germany’s policy on nuclear power was her terror of the Greens who were suddenly polling 25 percent of the national vote.

It was the Greens too who were responsible for Energiewende – the policy which is turning Germany into the opposite of what most of us imagine it to be: not the economic powerhouse we’ve been taught to admire all these years, but a gibbering basket case. This becomes clear in an investigation by the German newspaper Handelsblatt, which reports the horrendous industrial decline brought about by green energy policies.

Hardest Hits Are The Utilitites

Hit hardest, of course, are the traditional utilities. After all, the energy transition was designed to seal their coffin. Once the proverbial investment for widows and orphans because their revenue streams were considered rock-solid — these companies have been nothing short of decimated.

With 77 nuclear and fossil-fuel power plants taken off the grid in recent years, Germany’s four big utilities — E.ON, RWE, Vattenfall and EnBW — have had to write off a total of €46.2 billion since 2011.

RWE and E.ON alone have debt piles of €28.2 billion and €25.8 billion, respectively, according to the latest company data. Losses at Düsseldorf-based E.ON rose to €6.1 billion for the first three quarters of 2015. Both companies have slashed the dividends on their shares, which have lost up to 76 percent of their value. Regional municipalities, which hold 24 percent of RWE’s shares, are scrambling to plug the holes left in their budgets by the missing dividends.

Thousands of workers have already been let go, disproportionately hitting communities in Germany‘s rust belt that are already struggling with blight. RWE has cut 7,000 jobs since 2011. At E.ON, the work force has shrunk by a third, a loss of over 25,000 jobs. Just as banks spun off their toxic assets and unprofitable operations into “bad banks” during the financial crisis, Germany’s utilities are reorganizing to cut their losses. 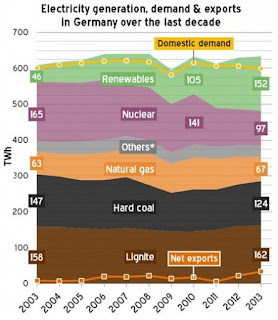 Why are the Germans enacting such lunacy? Aren’t they supposed to be the sensible ones? Well yes, up to a point. As a seasoned German-watcher explains to me, it’s with good reason that one of Germany’s greatest contributions to the world’s vocabulary is the word Angst. The Germans are absolutely riddled with it – always have been – and it explains the two otherwise inexplicable policies with which Germany is currently destroying itself.

One, of course, is Energiewende caused by a misplaced, but deeply-held neurosis about stuff like diminishing scarce resources and “global warming” and the evils of Atomkraft (Nuclear power).

The other are its similarly insane immigration policies – the result of the neurosis that if it doesn’t replace its declining population with a supposedly healthy influx of immigrant workers, then it will wither and cease to be the great force it was under people like Frederick the Great, Bismarck and that chap in the 1930s and that no one will know or care where Germany is any more.

Ironically, though, if national decline is what the Germans most fear then the two policies they are pursuing to avoid it happening to be the ones most likely to hasten it. This is sad. Sad for Germany which, for all its faults, has produced some pretty impressive things over the years: Beethoven; Kraftwerk; Goethe; Porsche; autobahns; those two girls on Deutschland 83.

And even sadder for those of us who, through absolutely no fault of our own happen to be shackled politically and economically to a socialistic superstate called the European Union, most of whose rules are decided by Germans over whom we have no democratic control.

Oh and by the way, Greenies: as I never tire of reminding you, you insufferable tossers, not a single one of the “future generations” you constantly cite in your mantras as justification for your disgusting, immoral and anti-free-market environmental policies actually exists.


But the people you’re killing now as a result of those environmental policies DO exist. Or rather they did, till you choked or froze them to death, you vile, evil, eco-Nazi scumbags.