ISIS has expressed several times that Hindu India is at its radar for attack and conversion. The Islamic State (IS or ISIS) militant group says it wants to use Bangladesh as a launching pad to gain a foothold in neighboring Hindu-majority India and Buddhist-dominated Myanmar.

The plan was revealed by the alleged chief of ISIS in Bangladesh, named as Sheikh Abu Ibrahim al-Hanif, in an interview with the IS mouthpiece magazine, Dabiq. It was immediately dismissed by Bangladesh’s Home Minister Asaduzzaman Khan, who insisted that IS has no presence in his country and that the South Asian nation would never allow IS to use it as a base to expand its influence in the region.

The IS had claimed responsibility for a series of killings and attacks of bloggers, writers, foreigners and non-Sunni Muslim minorities. Khan said however that some local militants had been using the “IS brand to add value to their names.”

In his interview, al-Hanif said that Bangladesh was “an important region” for the IS and its “global jihad” due to its “strategic geographic position.” “[Bangladesh] is located on the eastern side of India, whereas the [Pakistan-Afghanistan region] is located on its western side,” he noted.


He said an ISIS base in Bangladesh “will facilitate performing guerrilla attacks inside India simultaneously from both sides.” “Also, jihad in [Bangladesh] is a stepping-stone for jihad in Burma [Myanmar].”

Commenting on the report, Minister Khan said Bangladesh “will in no way allow the people with alien ideology [to] develop bases here to attack other countries; that will not happen.” “I want to say unambiguously that IS has no presence in Bangladesh,” he told reporters. “May be a handful of [local] people may subscribe to the IS views.”

Bangladesh media gave wide coverage of al-Hanif’s interview. This is second time the IS magazine featured the group’s strategy in Bangladesh. Late last year, it published a five-page report detailing its expansion plan in the Muslim-majority nation.

“This time an elaborate plan about Bangladesh has been written; this is significant,” Syed Mahfuzul Haque Marzan, a teacher of criminology at Dhaka University, told BenarNews. The IS threat, he warned, should not be taken “lightly in any way,” calling for “more in-depth investigation.”

A former senior Bangladesh military officer, Air Commander Ishfaq Elahi Chowdhury, said IS would not be able to use the country as a staging post against India and Myanmar, citing close counterterrorism cooperation among the countries. 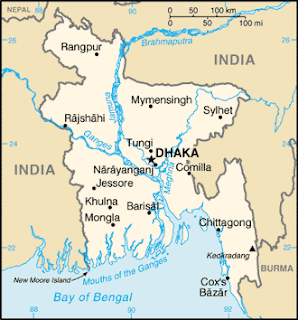 Both IS and the terror group Al-Qaeda are competing for expansion in Bangladesh, a nation of 160 million Muslims, according to Singapore-based counterterrorism expert Rohan Gunaratna.

“IS and Al-Qaeda leaders consider Bangladesh as a fertile ground for recruitment,” said Gunaratna, a BenarNews columnist who heads the International Center for Political Violence and Terrorism Research at the S. Rajaratnam School of International Studies in Singapore.

“Although Bangladesh has been uncompromising in its approach to fight both IS and al Qaeda, these two groups have developed a presence on Bangladesh soil. They have recently killed both Bangladeshis and foreigners.” Indian officials were not immediately available for comment on the IS plan.

But a former Indian army officer and defense analyst, Major General Satbir Singh, told BenarNews that the government should devise “a proper defense policy with regards to terror organizations like the ISIS.”


“We need to have a secured security environment for achieving peaceful development and national integration. That environment can be achieved only if we have good, actionable intelligence and coordinated response of all security agencies together,” he said.
Posted by Hla Oo at 7:09 PM