(CNN) BANGLADESH: Once again, a secular Muslim is hacked to death for his un-Islamic views. Muslim assailants hacked to death a Bangladeshi professor early Saturday near his home in Rajshahi city, authorities said.

Rezaul Karim Siddique, 58, was an English professor at Rajshahi University. He was waiting for a bus to take him to campus when two or three people attacked him from behind and stabbed him in the neck, according to Sadhir Haider Chowdhury, a city police commissioner.

The professor died on the spot. It's unclear whether his attack was related to the recent hacking deaths of bloggers in the nation. An investigation is ongoing.

ISIS claimed responsibility for the killing, according to Amaq, the terror group's media agency. "ISIS fighters assassinated a University professor for calling to atheism in the city of Rajshahi in Bangladesh," a statement from the group said.

CNN cannot immediately confirm ISIS' claim, nor its statement on the religious beliefs of the victim. Earlier this month, Bangladesh Law and Justice Minister Anisul Huq told CNN that it was "safe to say that there is no existence of ISIS in this country."

Huq also dismissed reports "about the claim of ISIS that they're trying to make Bangladesh their base headquarter for operations in India, Bangladesh and Myanmar."

"That's their claim, one can claim anything," he said.

Village is a 'hotbed of militants'

Earlier, a police official said the killers might have been jihadis. "We believe Islamic militants were behind the attack, because the nature of the incident is similar to previous attacks carried out on atheist writers and activists," said Nahidul Islam, the city's deputy police commissioner.

"Siddique was very active organizing cultural events in the university," Islam said. "He was also planning to open a music school in his home village, Bagmara." The village "is a hotbed of JMB militants," police said. JMB refers to Jama'atul Mujahideen Bangladesh, a fundamentalist Islamic organization in the nation.

But the deputy police commissioner sounded a cautionary note, saying police had not found evidence that the professor wrote or spoke against Islam.

'He had no political links'

And Anima Chowdhury, a former student who studied literature with the professor from 2010-2015, said she saw nothing political in him that could have led to such an attack. "I don't know what the motive is, but he was a very good person and he had no political links," Chowdhury said.

"He wasn't involved in any issues that can cause this -- it's really mysterious and it was really shocking because we didn't expect something like this could happen to him. I guess we have to wait for the reasons."

Rajshahi University posted a message of mourning on its Facebook page. "All classes and exams will be suspended today and tomorrow to protest the killing of our English professor," the post says.

Bangladeshi media reports on 7 August 2015 that Ansar al-Islam, a local chapter of al-Qaeda had claimed responsibility for killing. A gang armed with machetes has hacked a secular blogger to death at his home in Dhaka in the fourth such murder in Bangladesh since the start of the year, an activist group and police have said.

August 6 - Niloy Chatterjee, blogger, hacked to death at his home in Dhaka.
May 12 - Ananta Bijoy Das, blogger for Mukto-Mona website, killed while on his way to work in the city of Sylhet.
March 30 - Washiqur Rahman Babu, blogger, hacked to death by three men in Dhaka.
February 26 - Avijit Roy, a prominent Bangladeshi-American blogger, killed while walking with his wife outside Dhaka University.

Niloy Chatterjee, who used the pen-name Niloy Neel, was murdered on Friday after the men broke into his flat in the capital's Goran neighbourhood, according to the Bangladesh Blogger and Activist Network, which was alerted to the attack by a witness.

"They entered his room in the fifth floor and shoved his friend aside and then hacked him to death. He was a listed target of the Islamist militants," the network's head Imran H Sarker, told the AFP news agency.

Later on Friday, Bangladeshi newspaper The Daily Star, reported that Ansar al-Islam, a local chapter of al-Qaeda had claimed responsibility for the killing. The newspaper said the group had sent an email to media houses in Bangladesh, adding that the authenticity of the email issued by Mufti Abdullah Ashraf, who claimed himself to be the spokesman of Ansar-Al-Islam, could not be verified independently.

Chatterjee, 40, was a critic of religious extremism that led to bombings in mosques and the killing of numerous civilians, Sarker said. Police confirmed Chatterjee, who lived with his family, had been murdered but had no details on his background. In a recent Facebook post, Chatterjee said he was being followed by two strangers. He said he had approached the police but they had refused to register his complaint.

The United Nations special rapporteurs on freedom of expression, David Kaye, and on extrajudicial executions, Christof Heyns, condemned the blogger's murder. "The violent killing of another critical voice in Bangladesh shows that serious threats to freedom of expression persist in the country," the pair said in a statement on Friday, calling for a prompt and thorough investigation. "It is vital to ensure the identification of those responsible for this and the previous horrendous crimes, as well as those who may have masterminded the attacks."

There have been at least five bloggers attacked in Bangladesh since 2013, four of them since February of this year. "There a is serious lack of inertia in part of Bangladesh authorities to investigate these thoroughly and find the actual culprits behind all these killings," Al Jazeera's Tanvir Chowdhury, reporting from Dhaka, said.

On May 12, Ananta Bijoy Das, another blogger, was killed in the Subid Bazar area of Sylhet city as he walked to in the morning. In March, blogger Washiqur Rahman Babu was hacked to death in Dhaka by three men over alleged anti-Islamic writings, with two of the suspected attackers caught near the scene. In February, Bangladeshi born American writer-blogger Avijit Roy was killed near the Dhaka University campus.

At least in two of the cases, the killers were apprehended, while in other cases only suspects were arrested. Authorities said their links to "radical Islamist groups" are "under investigation."

Sumit Galhotra, a spokesman at the New York-based Committee to Protect Journalists, told Al Jazeera that the latest incident "serve as a wake-up call" for the government, to do "everything necessary" to arrest and prosecute the attackers. "Unless the government establishes accountability on these cases, these attacks will continue," he said, adding that many Bangladeshi bloggers are coming threat for their work.

In 2013, Ansarullah Bangla Team, the group many believe to be behind the recent spate of murders, published a hit list of 84 secular bloggers. My name was on it. (This was not the only list, nor would it be the only time my name would appear on one.)

I was listed because, like many of my fellow writers, I wrote blogs and Facebook posts supporting a scientific outlook, women’s rights, and minority issues. I was also critical of religious fundamentalism.

When on 26 February this year, prominent blogger and Bangladeshi scientist Avijit Roy was hacked to death, I and my fellow writers burned in anguish. We demanded the immediate arrest of those responsible for Avijit’s killing but the government remained silent and inactive.

As we later discovered, Avijit’s killing was not an isolated incident.  Washiqur Babu, Ananta Bijoy Das, Niladry Neel and the latest, Arefin Dipon, all fell victim to the “machete-reply” – an extremist response to scientific questions, opinions and secular activities. The government’s continued reluctance to bring justice in these cases further endangers other targeted bloggers.

12 November marks six months since the murder of Ananta Bijoy Das, who worked closely with Avijit, yet there has been no progress in finding his killers. To date, there has been no serious investigation of any of the other murder cases, including Ahmed Rajib Haider who was killed by the same group of extremists in the same way and for the same reason two and a half years ago.

Too afraid to go to work

I stopped going to the office after one of the machete killings. I was absent for so long, I was about to lose my job. I was the sole breadwinner of my family – the financial impact would have been dire. But what else could I do? My name was on several hit lists published by extremists yet the police were not willing to protect me.

At least, that is how I felt after hearing from other bloggers who asked the police for help without success. You can’t imagine the panic I felt, thinking I might be chopped to pieces at any time by anyone in the street.

I tried to confine myself to my home. But, of course that was impossible. You can’t imagine the panic I felt, thinking I might be chopped to pieces at any time by anyone in the street. I monitored people around me constantly, checking whether anyone was following me. It was as if everyone in the street was my possible killer. It was a horrible, haunting situation.

No one could save me. My killers would never be prosecuted. Rather, they would be regarded as heroes by certain sectors of society.  It was not even safe for me at home. Niladri Neel adopted that strategy after asking the police for help, but ultimately he was hacked to death in his own house. (As if the Policemen themselves were alerting the Islamist killers?)

Somehow, with help from Amnesty and other humanitarian organizations, I managed to flee Bangladesh. Apparently, I am now in a safer place than my fellow bloggers are. But each time I read about another killing, I know how my friends feel in Bangladesh, and remember how I felt, too – how the cold current of fear would flow up my spine. 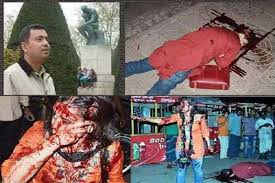 A generation living under “machete terrorism”

I don’t think any other generation in Bangladesh’s history has lived under the threat of “machete terrorism” for such a long period. No other generation has had to live with the constant fear of death on its mind.

We are not smugglers, killers, rapists or traitors. We simply write blogs and express our opinions. Some of us publish books, some of us write on Facebook walls and many of us have demanded justice for war crimes.

But the irony is that our opinions are seen as heinous crimes, so we are being killed or exiled. Groups of young bloggers, writers and activists are fleeing the country and heading for Europe. And the number of people willing to condemn these killings shrinks, as pens are being stopped every moment in Bangladesh.

Ananya Azad is Next. “You would be the next. So be careful”, is what Bangladeshi blogger Ananya Azad received as a Facebook message, after being listed as an atheist blogger against Islam by radical Islamists. The Facebook message threatened Ananya with a gruesome death for being the son of his ‘nastik’ father and that his throat will be slashed at Dhaka University.

Azad is another blogger to be targetted by radical Islamists in Bangladesh. In 2013, the Bangladesh Interior Ministry received a list of 84 ‘atheist’ bloggers from radical Islamists. Most of the listed bloggers chose to ignore such a threat until they started getting bumped off.

Azad has been always blogging about counter religious intolerance issues and religious fundamentalism, and so have been many other Bangladeshi bloggers. While many of the listed bloggers are in hiding, Azad is contemplating on leaving the country than live with the fear of assassination if out in the open.