(Giullio Meotti’s Article direct from The GATESTONE INSTITUTE on 20 April 2016.)

The first victim of the Islamist war in Algeria was a girl who refused the veil, Katia Bengana, who defended her choice even as the executioners pointed a gun at her head. In 1994, Algiers literally awoke to walls plastered with posters announcing the execution of unveiled women.

In April 1947, Princess Lalla Aisha gave a speech in Tangiers and people listened astonished to that unveiled girl. In a few weeks, women throughout the country refused the scarf. Today Morocco is one of the freest countries in the Arab world.

In the mid-1980s, sharia law was implemented in many countries, women in the Middle East were placed in a portable prison and in Europe they resumed the veil to reclaim their "identity," which meant the refusal of assimilation to Western values and the Islamization of many European cities. First veils were imposed on women, then Islamists began their jihad against the West.


Laurence Rossignol, France's Minister for the Family, Children and Women's Rights, sparked a furor about the Islamic veil proliferating in her country, when she compared headscarved women to "American negroes who accepted slavery." In addition, Elisabeth Badinter, one of France's most famous feminists, even called for boycotting Europe's fashion companies, such as Uniqlo and Dolce & Gabbana, which are developing Islamically correct clothes (in 2013, Muslims spent $266 billion dollars on clothing, and the figure could reach $484 billion by 2019).

A new trend is also emerging in Western popular culture, which was almost invisible in the media a decade ago: headscarved women are now also present in television programs such as MasterChef.

The mainstream culture now considers veiling women "normal." Air France recently called on its female employees to wear veils while in Iran. The government of Italy recently veiled nude sculptures at Rome's Capitoline Museum during a visit by Iran's President Hassan Rouhani, out of "respect" for his sensibilities.

In the Arab-Islamic world, however, for a long time covered women were the exception. It is hard to believe that, until the early 1990s, the majority of women in Algeria were not veiled. On May 13, 1958 at Place du Gouvernement in Algiers, dozens of women tore off their veils. Miniskirts invaded the streets.

Iran's Revolution reversed this trend: the first scarf appeared at the beginning of the 1980s with the rise of the Islamic movements in Algeria's universities and poor neighborhoods. The hijab was distributed by the Iranian Embassy in Algiers.

In 1990, Algeria was on the edge of a long season of death and fear: a civil war, with the specter of Islamist breakthrough (100,000 dead). People knew that something terrible was going to happen by counting the number of veils in the streets.

The first victim of the Islamist war in Algeria was a girl who refused the veil, Katia Bengana. She defended her choice even as the executioners pointed a gun at her head. In 1994, Algiers literally awoke to walls plastered with Islamist posters announcing the execution of unveiled women. Today, very few women dare to leave their house without a hijab or chador.

Look at the photographs of Kabul in the 1960s, 1970s and 1980s, and you will see many unveiled women. Then came the Taliban and covered them brutally by deadly force. 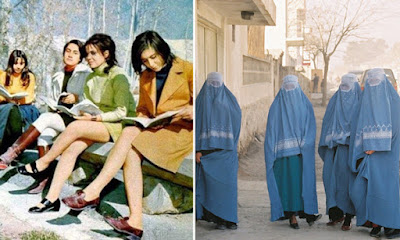 The emancipation in Morocco was sparked by Princess Lalla Aisha, the daughter of Sultan Mohamed Ben Youssef, who took the title of king when the country proclaimed independence. In April 1947, Lalla gave a speech in Tangiers and people listened astonished to that unveiled girl. In a few weeks, women throughout the country refused the scarf. Today Morocco is one of the freest countries in the Arab world.

In Egypt, back in the 1950s, President Gamal Abdel Nasser took to television to mock the Muslim Brotherhood's request to veil the women. His wife, Tahia, did not wear a scarf, even in official photographs.

Today, according to the scholar Mona Abaza, 80% of Egyptian women are veiled. It was only in the 1990s that the strict Wahhabi version of Islam arrived in Egypt, through millions of Egyptians who went to work in Saudi Arabia and other Gulf countries. Meanwhile, Islamist political movements gained ground. Then Egyptian women began sporting the veil (unless they risked being stoned and groped on the streets of Cairo).

In Iran, the traditional black veil covering Iranian women from head to ankles, invaded the country under Ayatollah Khomeini. He asserted that the chador is the "banner of the revolution" and imposed it on all the women.

Fifty years earlier, in 1926, Reza Shah had provided police protection to women who had chosen to refuse the veil. On January 7, 1936, the Shah ordered all the teachers, the wives of ministers and government officials "to appear in European clothes." The Shah asked his wife and daughters to go unveiled in public. These and other Western reforms were supported by Shah Muhammad Reza Pahlavi, who succeeded his father in September 1941, and instituted the ban on veiled women in public.

In Turkey, Mustafa Kemal Ataturk harangued female crowds, pushing them to set an example: taking off the veil meant hastening the necessary rapprochement between Turkey and Western civilization. For fifty years, Turkey refused the veil -- until 1997, when the government headed by the Islamist Necmettin Erbakan abolished the ban on the veil in public places.

Turkey's Erdogan used the veil to encourage the rampant Islamization of the society.

In contrast, Tunisia's President, Habib Bourguiba, issued a circular banning the wearing of hijab in schools and public offices. He called the veil "odious rag," and promoted his country as one of the most enlightened Arab nations.

It was not only the Muslim world that for a long time refused this symbol. Before the spread of radical Islam, the miniskirt, a symbol of Western culture, could also be seen all over the Middle East. There are many photographs to remind us of that long period: the unveiled stewardesses in skirts of the Afghan airline (what an irony that Air France today wants to veil them); the beauty contest that King Hussein of Jordan organized at Hotel Philadelphia; the Iraqi female football team; the Syrian female athlete Silvana Shaheen; the unveiled Libyan women marching in the streets; the female students at the Palestinian Birzeit University and the Egyptian girls on the beach (at that time, a burkini would have been rejected as a cage).

Then, in the mid-1980s, everything suddenly changed: Sharia law was implemented in many countries, women in the Middle East were placed in a portable prison, and in Europe they resumed the veil to reclaim their "identity," which meant the refusal of assimilation to Western values and the Islamization of many European cities.

First veils were imposed on women, then Islamists began their jihad against the West.

First we betrayed these women by accepting their slavery as a "liberation," then Air France started veiling women while in Iran as a form of "respect." It is also revealing of the hypocrisy of most of Western feminists, who are always ready to denounce the "homophobic" Christians and "sexism" in the U.S., but keep silent about the sexual crimes of radical Islam.

In the words of the feminist Rebecca Brink Vipond, "I won't take the bait of a patronizing call for feminists to set aside their goals in America to address problems in Muslim theocracies." These are the same feminists who abandoned Ayaan Hirsi Ali, the brave Dutch-Somali dissident from Islam, to her own defenses even after she found refuge in the U.S.: they prevented her from speaking at Brandeis University.

For how long we will maintain our ban on female genital mutilation (FGM)? A study just published in the U.S. suggests that allowing some "milder" forms of female mutilation, which affect 200 million women in the world, is more "culturally sensitive" than a ban on the practice, and that a ritual "nick" of girls' vaginas could prevent a more radical disfiguring practice.

The proposal didn't come from Tariq Ramadan or an Islamic court in Sudan, but from two American gynecologists, Kavita Shah Arora and Allan J. Jacobs, who published the study in one of the most important scientific journals, the Journal of Medical Ethics. (They even boldly suggested the denigrating term FGM should be replaced by FGA the Female Genital Alteration.)

It is a testament to the depths that can be reached in what the French "new philosopher," Pascal Bruckner, called "the tears of White men" with their masochism, cowardice and cynical relativism. Why not also justify the Islamic stoning of women who are said to commit adultery? It is as if we cannot capitulate quickly enough.


(Giulio Meotti, Cultural Editor for Il Foglio, is an Italian journalist and author.)
Posted by Hla Oo at 6:45 PM