Bengali Shwe-Youk-Du-Lar and His Enormous Family of 82

Meet Joe Black the Death, sorry, please meet Shwe-Youk-Du-Lar and his typical illegal Bengali-Muslim family of 82 living here in the formerly Yakhine-Buddhist village of Ale-Than-Kyaw situated in the infamous border township of Maungdaw in Burma.

There is nothing typical about Shwe-Youk-Du-Lar and his huge family anywhere else but the frontier township of Maungdaw where the illegal Bengali-Muslims have been breeding like jack rabbits and rapidly outgrowing the Arakanese or Yakhine-Buddhists the hapless natives.

Our Shwe-Youk-Du-Lar (aka) Sayyad Abdulla has four wives, twenty-eight sons & daughters, and forty-nine grandchildren, all together whopping eighty-two in one single family living under the same roof. All well fed and taken care of by none other than the pro-Rohingya UNHCR.

And he is not alone in the field of exemplary breeding in his notorious village of Ale-Than-Kyaw formerly an old Yakhine-Buddhist village. There are countless others like the Bengali-Muslims back home in the population-exploding Bangladesh.

The British purpose for establishing the V-force and arming the frontier Bengalis was to fight the invading Japanese army during the Second World War, but instead of fighting the Japanese and BIA (Burma Independence Army) the heavily-armed Bengali-Muslims brutally cleansed the innocent Buddhist-Yakhines for their land and their properties. 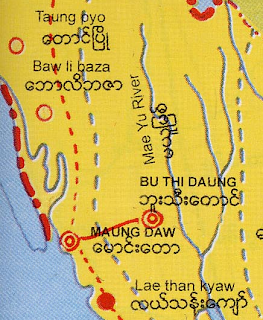 Illegal Bengali-Muslims constantly coming across the porous borderline have then taken over the village and the surrounding fertile farmlands and fishing-waters and occupied the seriously-blood-stained village continuously for last 70 odd years as they violently prevent the resettlement of Buddhist-Yakhines in the old Yakhine villages by the Bangladeshi border.

Now the village is totally Bengali-Muslim except for its very totally Burmese name as it is absolutely impossible to change the Burmese name of a village or town to a foreign-sounding name in Burma.

After all these years the village legend still whispered that the original Bengali settlers like Shwe-Youk-Du-Lar's own father had each killed at least 200 Maugs (Bengali derogatory term for the Buddhist-Yakhines) in the 1942 Bengali-Yakhine riots and took a prime piece of farmland each for themselves and a large block of village land each to build their family houses.

Shwe-Youk-Du-Lar now fashionably claims like everybody else in his village to be a so-called ethnic-Rohingya, who were supposed to be living in our Burma for thousands of years, but his late Bangladeshi father and mother were born and they grew up in the Taknaf of Chittagoong District till their crossover to Burma the greener pasture across the border from his homeland Bangladesh the population-exploding and slowly-sinking nation of whopping 160 million.

Shwe-Youk-Du-Lar and his large family of 82 are now minor-celebrities in Burma after the Union Minister for the Border Affairs Lieutenant-General Thein Htay picked them out and mentioned in his press conference as a typical illegal Bengali-Muslim family and the sole reason for the alarming racial mix of overwhelming 96% Bengali-Muslims and puny 4% native Yakhine-Buddhists in the dangerously unstable border townships of Maungdaw and Butheedaung by the border with Bangladesh.

“I couldn’t find a suitable word to describe these Bengalis' incredibly-huge and mind-blowing birth rate,” said the Minister astonishingly at the press conference held on July 30 at the old Foreign Ministry Office in Rangoon to explain the race riots and also the present situations in the Arrakan to the foreign embassies, UN organizations, and INGOs in Burma.


This is Islam VIDEO from You Tube