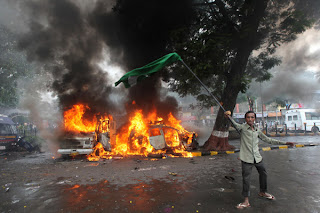 Mumbai was put on high alert on Saturday after two persons were killed and 54 injured when a protest by a Muslim organisation over “atrocities” against the community in Myanmar and Assam turned violent.
A crowd estimated to be 15,000-strong had assembled at the Azad Maidan for the protest organised by the Raza Academy and joined in by two others.
According to the police, protestors set fire to three media outdoor broadcasting vans and four police vans besides damaging vehicles, including BEST buses. The police had to resort to lathicharge. A senior inspector sustained serious head injuries in the violence while one constable is missing. 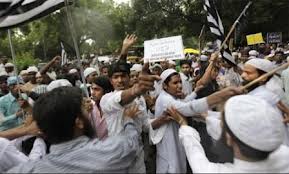 Police Commissioner Arup Patnaik said it was around 3 pm that the crowd turned violent, after some protesters showed “provocative photos” of the Assam violence. “Some people started raising slogans against the police and media. They set fire to police vehicles,” said Patnaik. “As we tried restraining the crowd, a scuffle broke out between the protestors and police.”
The police said they asked the protesters to exercise control, and were told by the organisers that they wanted the crowd to disperse.
Of the 54 injured, 45 were policemen, who were hit on their heads, legs, backs and stomach by stone pelters. Eight of them have serious head injuries. 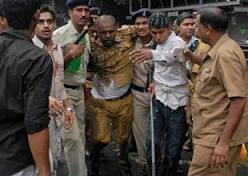 Anil Chavan, a 22-year-old constable, said: “I could see them tossing a policeman up and down several times.” He was attacked when he rushed in to help along with the others.
While Chief Minister Prithviraj Chavan postponed an iftar party scheduled for today, Home Minister R R Patil, who was in his home district Sangli, rushed back to Mumbai.
Leader of the Opposition in the Vidhan Sabha Eknath Khadse sought a judicial probe. “The question arises whether the presence of a particular community changed the government’s role,” he said.
The Mumbai Police Crime Branch has been asked to probe the case.