US Removal of Michael Moe Myint from VISA Ban List?

(This post is direct from the WIKILEAK’s Leak Cables.)

Burma: Removal Of U Moe Myint From The Visa Ban List

C O N F I D E N T I A L RANGOON
SUBJECT: BURMA: REMOVAL OF U MOE MYINT FROM THE VISA BAN LIST
Classified By: Economic Officer Samantha A. Carl-Yoder for Reasons 1.4 (b and d).

¶1. (C) U Moe Myint, owner of Myanmar Petroleum Resources Ltd. (MPRL) and Myint and Associates, became subject to the 212F visa ban in 2008 due to alleged connections to the Burmese regime. While he is a successful Burmese businessman, he did not earn this wealth based on his connections to the regime. U Moe Myint is often at odds with the GOB, particularly the Ministry of Energy and the Myanmar Oil and Gas Enterprise (MOGE), and has repeatedly declined "offers" to enter into a typical crony relationship. Under Presidential Proclamation 6925, Embassy Rangoon requests that U Moe Myint and his family be removed from the 212F list because he is a legitimate businessman who does not provide or derive significant support to or from the regime. U Moe Myint is also a close Embassy contact, often providing us with valuable information on Burma's oil and gas sector and general economic information. End Summary.

Background on U Moe Myint 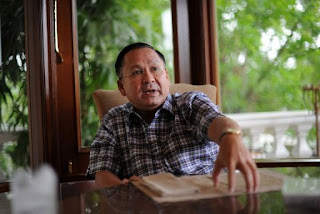 ¶2. (C) U Moe Myint, a.k.a. Michael, was born in Rangoon on September 11, 1952, and is married with two sons. He graduated from the International School in Bangkok and attended the University of Rangoon and Marshall University in West Virginia. He holds a degree in physics. Upon his return to Burma from Marshall University, he attended airline training school and in 1974 began to fly for state-owned Myanmar Airways. He trained other pilots and was the personal pilot for former dictator Ne Win. According to U Moe Myint, he resigned from Myanmar Airways in 1987 after he saw his civil servant colleagues nearing retirement with small pensions and "no hope for the future in their eyes." He rejected generous incentives offered by his supervisors to stay with Myanmar Airways (Ref A).

¶3. (C) In 1989 U Moe Myint established Myint and Associates, the first company to supply foreign companies working in Burma's developing oil and gas industry. According to Terry Howe, Managing Director of MPRL, Myint and Associates supplies anything that companies need, from catering services to drill bits. U Moe Myint's clients include onshore oil companies as well as offshore operators, including Total, Petronas, and Thailand's PTT Exploration and Production (PTTEP). Myint and Associates continues to be the largest provider of services to foreign oil companies, and has expanded its business during the past five years as offshore gas development has expanded. He now employs 3,000 people directly, and over 10,000 through subcontracts.

¶4. (C) U Moe Myint has a close relationship with professors from the Colorado School of Mines and sends employees overseas to get the latest training. He also maintains his competitiveness with the latest technology: he told us he had spent over USD 1 million to digitalize the information in his databases, and over USD 15 million for the latest industry software. U Moe Myint makes practical use of expertise gained from his international clients, and served as the Burmese representative of Baker Hughes, FMC Group, Mitsui, McDermott International, Bredo Price International and Shinawatra International.

¶5. (SBU) In 1996 Moe Myint, using the funds generated from Myint and Associates, established MPRL, registered in the British Virgin Islands. This company entered into a Performance Compensation Contract (PCC) with American company Baker Hughes and MOGE in 1996 to conduct oil and gas exploration and production at Mann oil field in Magwe Division. Baker Hughes withdrew from Burma in 1999 due to U.S. sanctions, selling its shares in the PSC to U Moe Myint for USD 1. Despite the complexities and expense of working in Burma's onshore oil industry, MPRL continues to produce oil for profit at the Mann Field (Refs B, C, and D). MPRL's operation is one of the most professional in Burma, even when compared to more experienced foreign oil and gas companies, United States Geological Survey (USGS) official Craig Wandrey told us during a recent visit (Ref E).

¶6. (C) In 2008 U Moe Myint was added to the 212F visa ban after applying for a tourist visa to visit his family in the United States. His eldest son, Sithu Moe Myint (DOB: 07 September 1982) graduated from the Colorado School of Mines in 2006 and currently works for Chevron in Australia. Sithu Moe Myint previously worked for Chevron in Houston, but during the renewal of his H1-B visa in 2007, he was also added to the 212F list. U Myo Myint's youngest son, Phone Kyaw Moe Myint (DOB: 12 September 1985), currently lives in the United States and attends the Colorado School of Mines. He will graduate this May and has reportedly been offered several jobs with U.S. firms in the oil and gas sector. He has been unable to leave the U.S. since 2007, knowing that he would not receive a new F-1 to finish his degree. U Moe Myint's wife, Dr. Ohmar Moe Myint (DOB: 13 Jan 1957), also is in the United States, and plans to return to Burma in May after Phone Kyaw Moe Myint graduates.

¶7. (C) U Moe Myint is one of Burma's most successful businessmen, and perhaps the most legitimate. By his own admission, he is the largest single taxpayer in Burma, paying more than USD 30,000 in taxes on individual and company income a year. (Note: Regime crony Tay Za, who allegedly earns more annually, pays far less in taxes, as his companies have a tax holiday, business contacts confirm. End Note.) U Moe Myint readily admits that the Burmese Government places pressure on him to "become a crony," offering him vehicle import permits in exchange for donations to government causes. According to U Moe Myint, he continues to turn down the offers, noting that he does not need to curry favor with the regime to be a success. While he does a substantial amount of volunteer and charity work, he does it on his own terms, choosing to support local NGOs rather than fund government-sponsored projects. U Moe Myint has a reputation in Rangoon for refusing to pay bribes or give gifts to the generals, economic contact Brett Melzer noted. He has paid the price for this practice, as the Ministry of Finance has audited his companies annually for the past three years, only to find that U Moe Myint at times overpays his taxes, MPRL Managing Director Terry Howe told us.

¶8. (C) Although MPRL is a respected company in the oil and gas sector, employing trained geologists and engineers, it faces difficulties with the Ministry of Energy and MOGE, according to Bob Thomas of Petronas. The Ministry of Energy and MOGE have made it difficult for the company to invest in both the onshore and offshore sectors. For example, during a recent visit by the USGS team, Howe lamented that MPRL would like to expand its operations in the Mann oil field, but MOGE will not approve its investment plans; he added that the Trade Council often declines MPRL's import permit requests as well. Crony companies do not face these types of difficulties from the regime. MPRL earlier was able to secure a PSC for the A-6 block in 2006. However, Howe told us that when MPRL planned to invest in Burma's offshore gas fields, it initially bid on block A-5 off the Rakhine Coast. MOGE eventually awarded the block to Burmese-owned IGE Co., which is owned by the sons of Minister of Industry-1 (Ref F). Had U Moe Myint been a real regime crony, MPRL would have won the contract, Howe pointed out.

¶9. (C) In addition to blocking investment, MOGE has been remiss in paying MPRL for oil purchased, Howe explained. It often takes MOGE more than a year to pay invoices, placing financial pressure on producing companies to continue operations without financial gain. Reftels D and G details how MOGE continues to owe MPRL, as well as several other companies, more than USD 10 million for outstanding invoices. Again, the regime treats crony companies much differently. 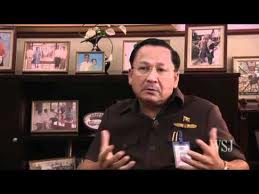 ¶10. (C) During the past two years, U Moe Myint has been a close contact of the Embassy, despite being placed on the 212F list. He regularly meets with us, providing us important information on Burma's economy, how the business community is faring, and new developments in the oil and gas sector. During the recent USGS/Department of Commerce visit, U Moe Myint and his team not only agreed to meet with the team, but shared their views on the current state of offshore gas development, as well as MPRL's proprietary information about their finds in the A-6 block (Ref E). During the more than two-hour meeting, MPRL staff were open and forthcoming with scientific data, geological perspectives on the possibility of new gas formations, and insights into future investment possibilities. The USGS/DOC team lauded the MPRL team for their high-quality work, which is based on the USGS methodology, and their frank and open analysis of the current oil and gas situation in Burma.

¶11. (C) U Moe Myint is a legitimate and respected businessman, who earned his success through hard work and ingenuity rather than ties to the regime. His sons have pursued degrees in geology and engineering, with plans to eventually come back to Burma and run MPRL. Embassy Rangoon does not consider either U Moe Myint or his family to be regime cronies. In accordance with Presidential Proclamation 6925, Embassy Rangoon requests that U Moe Myint and his family be removed from the 212F list because, to Post's knowledge, he does not provide and/or derive significant support to or from the regime. Moreover, he is a close contact of Embassy Rangoon, providing us with valuable information on Burma's economy in general and more specifically on the oil and gas sector.

In 2008, the US slapped a visa ban on him and his family because of his link to the oil and gas sector, believed to be riddled with cronyism. Some years ago, one of his two sons -- a petroleum engineer at Chevron in California -- was stranded in Canada and forced to shift base to Australia because his H1B visa was not renewed.

The ban was lifted just a few months ago, apparently after the embassy cable that exonerated Moe Myint of being a crony, but his son chose to return to Myanmar at the request of a high-profile neighbour: Aung San Suu Kyi.

Following short video is his recent interview with the Wall Street Journal.)