Pakistan Behind Buddhist Exodus out of India Proper? 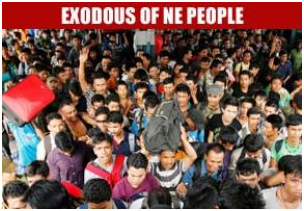 NEW DELHI: Videos doctored in Pakistan sparked NE exodus. The government on Saturday said a bulk of the doctored incendiary videos and horrific clippings of atrocities allegedly committed on Muslims in lower Assam and Myanmar were uploaded on various blogs in Pakistan in a bid to incite the minority community in India.
"Technical investigation has established that a bulk of the incendiary images was first uploaded on blogs in Pakistan," disclosed Union home secretary R K Singh.
He told TOI that India would raise the issue with Pakistan. "I am sure they will deny it, but we have fairly accurate technical evidence to show that the images originated and were circulated from their territory," he said.

The home secretary suggested the rumours were spread almost as an offensive. Considering the evidence, he said all images were doctored and meant to inflame passions across India.
"As many as 110 websites were involved in spreading the doctored clips. We have blocked 76 of them, and are in the process of getting others deactivated," he said, adding that Google and other sites, which hosted provocative blogs, have been approached.
In one instance, images of death and destruction caused by a cyclone have been morphed to be passed off as a case of atrocity on Muslims in Assam. In others, bodies of victims of an earthquake which occurred months ago was juxtaposed with photographs of Buddhist monks to project violence on Muslims in Myanmar by Buddhists.
The images of atrocities on Muslims have sparked tension across the country, with Mumbai, Lucknow and Allahabad witnessing mob violence. People from the northeast have been attacked in Pune, Hyderabad and Kerala, while a Tibetan was stabbed in Mysore in what appeared to be a case of retaliation against alleged brutalities on Muslims.
SMSs purportedly from Muslim groups threatening attacks on people from the northeast has triggered an exodus from several states, though governments have insisted they are merely rumours.