(This post is direct translation from the Myanmah Ahlin News Paper on 2 Aug 2012.) 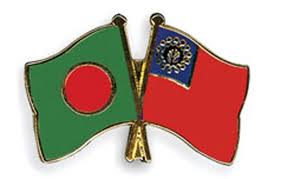 The Bangladeshi Ambassador HE Major General Anup Kumar Chakma commented as follows during the trip to Arrakan.
Recent racial incidents in the Arrakan were ignited by the May 28 Kyauknimaw incident (where a Yakhine-Biuddhits girl was raped and murdered by three Bengali-Muslim men), and the June 8 Maungdaw incident (where the Muslim mob after the Friday prayers rioted on the streets of Maungdaw as a direct response to the killing of ten Muslim pilgrims by the Yakhin-Buddhost mob in Taunggup on June 3).

Back in our country Bangladesh the Muslims also attend Mosques on the Fridays for the regular prayers. After the prayers the Imams always deliver the sermon of the day. That afternoon at the Maungdaw Mosque on the July 8 the Imams might have incited the youths by talking about the killing of ten Muslim pilgrims at Taunggup by the Buddhist mob.
But these Imams seemed not able to provide effective leadership after the crowd had left the mosque and started the disturbances on the nearby streets. Once their leadership had collapsed the racially incited crowd became violent and the disturbances had turned into the serious riots.
Since the beginning of all these incidents here in Burma our people in Bangladesh had been able to access un-confirmed news and all sorts of facts from the internet and various media outlets. But that news had not really influenced over the Bangladesh as a next door neighbour.
Bangladeshi government also had fully supported the appropriate actions taken by the Burmese government on June 11 just after the race riots. After releasing the detail news of riots in Bangladesh our government has also completely blocked all the border access into Bangladesh even while the superpower nations and some UN organizations had been demanding us to do the opposite and criticizing us for not keeping the border open.
But we all knew that the riots and all the troubles could multiply if the border was still open as normal. The obvious to see is if the border was open during the riots the terrorists and the rioters would become more daring as they knew they had their escape routes back to Bangladesh where they came from. That’s why we as a good neighbour strictly refused to let the Bengali rioters into our country.
We truly believe that unlike the similar troubles in some other countries the recent troubles in Arrakan are just the internal problems between two ethnic groups here. So we pray for Burma that the same troubles will not repeat in the future. We also have a positive view that the situations in Arrakan will be back to peaceful normal soon.