(Ryan Lizza’s Article  “FUSSBUDGET” from The New Yorker - Aug. 6, 2012.)
One day in March, 2009, two months after the Inauguration of President Obama, Representative Paul Ryan, of Wisconsin, sat behind a small table in a cramped meeting space in his Capitol Hill office. Hunched forward in his chair, he rattled off well-rehearsed critiques of the new President’s policies and America’s lurch toward a “European” style of government.
Ryan’s father, grandfather, and great-grandfather all died before their sixtieth birthdays, so Ryan, who is now forty-two, could be forgiven if he seemed like a man in a hurry. Tall and wiry, with a puff of wavy dark hair, he is nearly as well known in Washington for his punishing early-morning workouts as he is for his mastery of the federal budget. Asked to explain his opposition to Obama’s newly released budget, he replied, “I don’t have that much time.”
Ryan won his seat in 1998, at the age of twenty-eight. Like many young conservatives, he is embarrassed by the Bush years. At the time, as a junior member with little clout, Ryan was a reliable Republican vote for policies that were key in causing enormous federal budget deficits: sweeping tax cuts, a costly prescription-drug entitlement for Medicare, two wars, the multibillion-dollar bank-bailout legislation known as TARP. In all, five trillion dollars was added to the national debt. In 2006 and 2008, many of Ryan’s older Republican colleagues were thrown out of office as a result of lobbying scandals and overspending. Ryan told me recently that, as a fiscal conservative, he was “miserable during the last majority” and is determined “to do everything I can to make sure I don’t feel that misery again.”

In 2009, Ryan was striving to reintroduce himself as someone true to his ideological roots and capable of reversing his party’s reputation for fiscal profligacy. A generation of Republican leaders was gone. Ryan had already jumped ahead of more senior colleagues to become the top Republican on the House Budget Committee, and it was his job to pick apart Obama’s tax and spending plans. At the table in his office, Ryan pointed out the gimmicks that Presidents use to hide costs and conceal policy details. He deconstructed Obama’s early health-care proposal and attacked his climate-change plan. Obama’s budget “makes our tax code much less competitive,” he said, as if reading from a script. “It makes it harder for businesses to survive in the global economy, for people to save for their own retirement, and it grows our debt tremendously.” He added, “It just takes the poor trajectory our country’s fiscal state is on and exacerbates it.”
As much as he relished the battle against Obama—“European,” he repeated, with some gusto—his real fight was for the ideological identity of the Republican Party, and with colleagues who were content to simply criticize the White House. “If you’re going to criticize, then you should propose,” he told me. A fault line divided the older and more cautious Republican leaders from the younger, more ideological members. Ryan was, and remains, the leader of the attack-and-propose faction.
“I think you’re obligated to do that,” he said. “People like me who are reform-minded ignore the people who say, ‘Just criticize and don’t do anything and let’s win by default.’ That’s ridiculous.” He said he was “moving ahead without them. They don’t want to produce alternatives? That’s not going to stop me from producing an alternative.”
Ryan’s long-range plan was straightforward: to create a detailed alternative to Obama’s budget and persuade his party to embrace it. He would start in 2009 and 2010 with House Republicans, the most conservative bloc in the Party. Then, in the months before the Presidential primaries, he would focus on the G.O.P. candidates. If the plan worked, by the fall of 2012 Obama’s opponent would be running on Paul Ryan’s ideas, and in 2013 a new Republican President would be signing them into law. 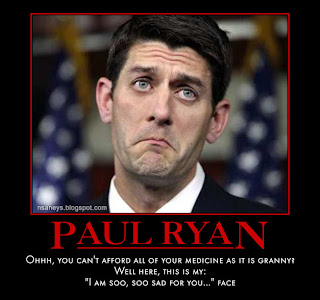 Sitting in his office more than three years ago, Ryan could not have foreseen how successful his crusade to reinvent the Republican Party would be. Nearly every important conservative opinion-maker and think tank has rallied around his policies. Nearly every Republican in the House and the Senate has voted in favor of some version of his budget plan. Earlier this year, the G.O.P. Presidential candidates lavished praise on Ryan and his ideas. “I’m very supportive of the Ryan budget plan,” Mitt Romney said on March 20th, in Chicago. The following week, while campaigning in Wisconsin, he added, “I think it’d be marvellous if the Senate were to pick up Paul Ryan’s budget and adopt it and pass it along to the President.”
To envisage what Republicans would do if they win in November, the person to understand is not necessarily Romney, who has been a policy cipher all his public life. The person to understand is Paul Ryan.
Janesville, Wisconsin, where Ryan was born and still lives, is a riverfront city of sixty-four thousand people in the southeast corner of the state, between Madison and Chicago. Three families, the Ryans, the Fitzgeralds, and the Cullens, sometimes called the Irish Mafia, helped develop the town, especially in the postwar era. The Ryans were major road builders, and today Ryan, Inc., started in 1884 by Paul’s great-grandfather, is a national construction firm. The historic Courthouse section of Janesville is still thick with members of the Ryan clan. At last count, there were eight other Ryan households within a six-block radius of his house, a large Georgian Revival with six bedrooms and eight bathrooms that is on the National Register of Historic Places.
(Please Continue Reading at the New Yorker)
Related Posts at Following Links:
Paul Ryan: President of The United States (2020)
Posted by Hla Oo at 11:34 AM