(This post is adaptation of the FarazAhmed.com’s Muslims Killing in Burma.)
In an interview with Voice of America (VOA) broadcast this week Burma’s Reformist President Thein Sein denied accusations of genocide from Muslim countries, saying that images posted online showing piles of bodies were “fabrications” and from “incidents that happened in other countries, not here.”
And here is the proof from the horse’s mouth. Mr. Faraz Ahmed Siddiqui the famous Pakistani blogger from Karachi and a fair-minded Muslim who was really sick of all the Muslim-killing lies against Burma and the fake photos released all over the world by the various groups of extremist Muslims (including the mega-oil-rich Saudi Arabia) has turned a whistleblower and exposed the conspiracy of his fellow Muslims.

The above photo cleverly labelled “A Muslim was burned in Burma and journalists are taking pictures instead of saving him,” really was originally the photo of a Tibetan activist setting fire himself to protest Chinese President Hu Jin Tao's visit to India. Read the story at this link.
And here also is another fake photo of Muslim Killings in Burma. This time a very large scale as in the photo were hundreds and hundreds of corpses piling up under the watching eyes of the killer Buddhist monks? 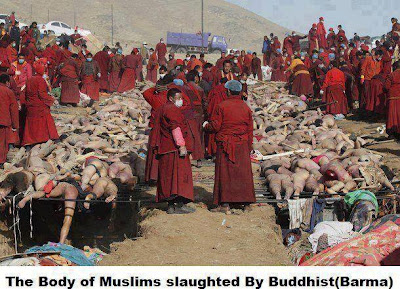 But it was also a lie and an Islamic fabrication as the following original photo and the accompanying story are telling a completely different but a true story behind that gruesome photo. 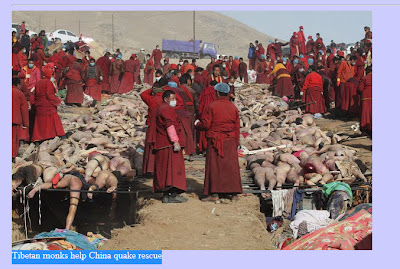 One thing these stupid Muslim extremists do not know is our Burmese army is extremely good at hiding their crimes especially the mass murders they have committed last 5 decades since 1962. During the failed 8-8-88 Uprising they killed a few hundreds in the daylight at the middle of Rangoon one day and by next morning every single body was gone and every single blood stain on the streets was thoroughly washed off during the night.

In Arrakan this year during the violent Bengali riots the Burmese soldiers might have to shoot and kill a few  hundred hardcore Bengali rioters to get the extremely dangerous warlike situations back under control but I do not think they would have kept any photographic evidence as those soldiers are so poor they do not have mobile phones or digital cameras on them and no cameramen or photojournalist were allowed into the area.