(Direct translation of news articles from the Eleven Media Group and Myanmah Ahlin.)
“If there arises a state of emergency that could cause disintegration of the Union, disintegration of national solidarity and loss of sovereign power or attempts therefore by wrongful forcible means such as insurgency or violence, the Commander-in-Chief of the Defence Services has the right to take over and exercise State sovereign power in accord with the provisions of this Constitution.” – Section 40C of 2008 Burma’s Constitution
There has been a serious dispute going on for quite a few months between the Burma’s Federal Parliament (Pyidaungsu-Hluttaw) and the Constitutional Tribunal since the Tribunal has determined that the parliamentary committees are not at the federal levels.

The constitutional dispute began in February this year when the Attorney-general, behalf of the President, asked the Tribunal to determine if various committees formed by the Federal Parliament have federal status and thus their benefits and parliamentary perks are at the federal level.

It appears that since the Hluttaw has been forming so many committees and sub-committees in short period the President wanted to rein in and also make their status quite clear legally.

The Tribunal then determined in March that the Hluttaw committees could not be designated as the Federal-level since according to the Section-97A (sub-sections I & II) of the 2008 Constitution the federal-level bodies can only be appointed by the president with the approval of the Union Parliament. Not by the Parliament itself.
97. (a) When the Pyidaungsu Hluttaw enacts a law, it may
(i)  authorize to issue rules, regulations and by-laws concerning that
law to any Union level organization formed under the Constitution;
(ii) authorize to issue notifications, orders, directives and procedures
to the respective organization or authority.
As anyone can see the section 97A referred by the Constitutional Tribunal is not directly related to the matter and the elected members of parliament especially the members of various committees were seriously upset by the denial of federal status. And they resentfully believed that the president was right behind that decision.
Elected MPs’ Attempt to Fire the Tribunal
Well after the Tribunal’s unfavourable determination, 301 elected MPs of Union Parliament signed and submitted a petition accusing the Tribunal members of incompetence and violation of the Constitution to the Speaker of Union Parliament U Shwe Mann on August 8.
As the petition has demanded the Speaker Shwe Man sent a letter to President Thein Sein. The letter basically demanded president to order all the members of the Constitutional Tribunal to resign before August 21 and if he doesn’t fulfil his demand a necessary quarter of Parliament members will submit to the Union Parliament a proposal demanding the resignation of the whole tribunal.
Rebuttal from the Tribunal and the President
As their response the Tribunal explained how they reached to their controversial determination of not recognizing the various parliamentary committees as the union level entities at a press conference on August 20 in Naypyidaw.
On the same day President Thein Sein also replied by a letter to the Union Parliament that instead of accusing of incompetence and asking for the resignation of the Constitution Tribunal the Hluttaw should be amending the Constitution.
By this letter he basically has taken the side of the Tribunal and openly dared the Union Parliament to amend the Constitution. President knows very well that without the support of appointed military members of the parliament amending the constitution is totally impossible.
Civilian MPs Forcing the Tribunal to Resign
At the August 27 sitting of Union Parliament (Pyidaungsu Hluttaw) U Myint Soe from Pyawbwe constituency submitted a proposal demanding the Constitutional Tribunal to declare that they have wrongly decided on the matter. The proposal was discussed by 22 members including Daw Aung San Suu Kyi and later voted for by 447 members out of total 629 members eligible to vote that day.
At the August 28 sitting of National Parliament (Ahmyothar Hluttaw) U Zaw Myint Phe from the USDP submitted a similar proposal accusing the Constitutional Tribunal of knowingly violating the constitution and not properly doing their constitutional-assigned duties. The proposal was discussed by 16 members and later 163 members voted for it.
But all the military members selected and appointed by their Commander-in-Chief VSG Min Aung Hlaing abstained from the voting of those two proposals.
All the civilian members from both parliaments are clearly showing their desire to recognize the parliamentary committees as the union-level entities. But at the same time all the appointed military members are unanimously opposing that desire by clearly following the order of their boss Min Aung Hlaing.
It was very obvious that the President Thein Sein and the Commander-in-Chief General Min Aung Hlaing are looking for a fight with the elected civilian members of the Parliament.
Why, I dare ask? Why during such a crucial time of implementing serious structural reforms.
Indirect Coup Threat from Presidential Spokesman?
Major (Bo-mhu) Zaw Htay widely known by the pseudonym Mhu-Zaw is the outspoken spokesman and the Director of the Office of the President. He is doing excellent job defending and supporting his boss in times of crisis and through his Face Book page he informally conveys various thoughts and ideas of the President.
Just few days ago he has written a lengthy article about the long history of military coups in Thailand on his Face Book page. Titled “Thai Political History from Wikipedia,” the article basically was the summary of coup-riddled political history of Thailand.
Major Zaw Htay specifically concluded his article by stating that Thailand is our next-door neighbour sharing both land and water and Thai democracy has peculiar double-digit occurrences of military coups and Thailand has been basically surviving on the never-ending life-cycle of election-coup-election-coup but the Thai democracy has been slowly maturing on that vicious cycle of many elections and equally-many coups.
It was perfectly reasonable to question about the timing of that article coming from Major Zaw Haty as he is extremely intelligent and a deeply patriotic army-officer.
Maybe he was indirectly warning the country that Burma military has been ready and waiting and a coup is looming in the shadow of this meaningless but slowly-deepening (so-called) constitutional crisis?
Intellectual Opinion Supporting the Tribunal's Decision

Following two photos are the Newspaper articles by Dr. Marlar Aung the Pro-rector of Rangoon University, supporting the bitterly-disputed determination of the Constitutional Tribunal, published in State-controlled Myanmah Ahlin Newspaper on September 2, 2012. 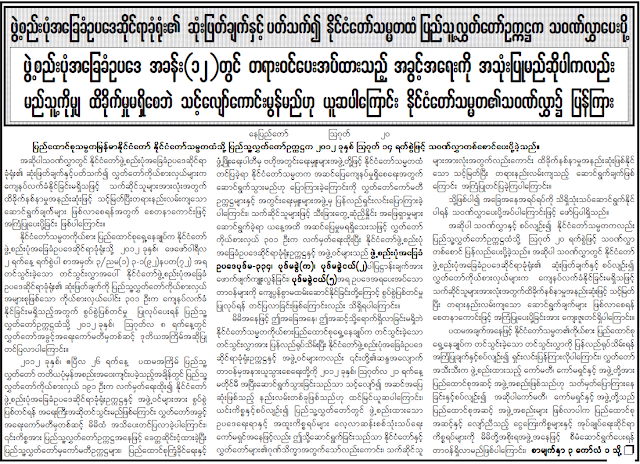