(This post is direct translation of articles from various Burmese language blogs.)

In the early evening of September 13 a thirteen-years-old Kachin schoolgirl on her way home from the Pharkant State High School was killed when KIA triggered a massive explosion of the series of 30 mines they had earlier planted along the road near the school.

Her name was Jar-Sai-Ein and she was a year-9 student and the mines killing her were the handy work of the Sixth Battalion Second Brigade of Kachin Independence Army well known in Burma as KIA.


According to the KIA the mines were intended for the Burma army column from the LIB-389 reported to be travelling along the busy road between Mhaw-wan-ga-lay and Sunt-nghai villages.
But their timing was wrong and they killed one and wounded many among the school children on their way home after school from the Pharkant State High School and Mhaw-wan State Primary School.
The wounded civilians and the children still receiving treatments in the Pharkant Hospital are Lu-bu-jar-lu-on (8), Lu-bu-khun-sai (31), Sai-lu-pan (17), Ga-long-khau-pan (36), Kyaw-Htain-Lin (17), Khau-saung (35), all from Mhawwan, and Soe-Moe (44) from Sut-yat-nghai.
Series of 30 remote-controlled mines: KIA Favourite
Ruthless KIA has been using what the local people (whether Kachins or Shans or Burmese) fearfully called the Mine-Ba-day-thar (Series of land-mines in Burmese) all over the populated areas of Kachin State to attack the army columns and also to stop the local civilian populace from freely moving around doing their own business like farming, hunting, or just travelling to and from their homes.
The end result is the indiscriminate killings of innocent men, women, and children like 13 years old schoolgirl Jar-Sai-Ein from Pharkant. Of course the KIA mines also kill the men of the Burma army.
On August 29 of this year a column from Burma army LIB-269 (Light Infantry Battalion) had a devastating loss from KIA Mine-Ba-day-thar when the column entered a Buddhist village known to be a anti-KIA village near Pharkant.
KIA had planted many lots of their Mine Ba-day-thar in the village and blew the whole village up when the whole army column was in the village. Apart from the large number of Buddhist villagers killed and wounded 6 army officers and 42 other ranks all total 48 men of LIB-269 under the TOC-21 (Tactical Operations Command) were killed in the devastating landmine attack.
Kachin countryside strewn with deadly KIA landmines
As their strategic policy KIA has been using millions of land mines they had stockpiled last 20 odd years of peace in case they had to face the Burma army again. And now they are using these mines all over once-peaceful Kachin State. In the process they indiscriminately killed and wounded mainly the innocent civilians and some Burma army men.
Many incompetent KIA men have even managed to kill themselves with their own mines as a lot of them minelayers are forced-recruits from the local Kachin and Shan villages with just few days of training on laying landmines. 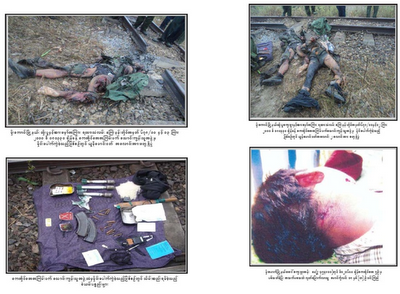 The main targets of KIA landmine campaign are the Mandalay-Myitkyinar rail line and the daily trains, and all vehicular roads so that the army wouldn’t be able to supply their infantry battalions all over the Kachin State.
But the sinister targets of KIA landmine campaign are the farms and villages as KIA has basically wanted to drive debilitating fear into the minds of local populace.
The demographic of Kachin land has been drastically changing since this civil war started by a group of militant-Christian Kachins in late 1950s as the direct response to that stupid U Nu’s decision to make Buddhism the state religion.
Kachins are now the minority in their own land after waging many decades of brutal civil war against Buddhist Burma army which is also equally brutal in their response to the Christian KIA.
Shans gradually moving up from the neighboring Shan State are now more than 60% of total population of Kachin State while ethnic Burmese now dominates major cities like Myitkyinar and Bamaw.
Nearly half of the KIA ranks and files are now ethnic Shan Buddhists but the officer ranks are still dominated by the ethnic Kachin Christians and the trouble is brewing in KIA field units as happened between the Wa troops and leading Burmese cadres in now-completely-disappeared CPB forces during the 1980s.
No longer are the majority of people their own Kachins the KIA needs deep-seated fear to control the local populace, and their landmines are the major instrument for planting that constant fear into people’s mind.
Civilian landmine casualties in Pharkant
On September 18 this year a Mhaw-wan resident 51 year-old Kachin woman Daw Lat-Sai was killed stepping on a KIA landmine planted on the dirt track by the Namaryan Creek, on her way to her small plot of vegetable land in Pharkant.
The locals brought her to the Pharkant Hospital but she died on the way. She was a poor widower and left two young sons and two young daughters destitute and hopeless from the loss of their mother and the only breadwinner of the family.
Her husband a Kachin was killed 5 years ago. Out of 4 now-orphaned children the youngest girl Ma Jar-Lone is a Year-3 student at the Mhaw-wan State Primary School.
The local KIA is now demanding her young children and relatives to pay back for their destroyed-landmine as their declared policy is to get back the inflated-cost of an exploded KIA mine if a person or a farm animal had stepped on it.
“These mines are for the Burma army soldiers to step on, not the local civilians and their farm animals, and if they step on it and kill or main themselves that’s their problem not KIA’s, but we must be paid for the damages done to our valuable landmine,” KIA proudly declare their policy and strictly enforce it.

Maung Brang, from Waimaw town across the Irrawaddy from Myitkyinar, in above photo was injured and Maung Lwan Ze his friend was killed stepping on a KIA mine planted on the dirt track near their village in Waimaw Township while they were searching for a stray cow. Brang almost lost his right eye and  his chest is now pockmarked with shrapnel from the landmine explosion.

Whether Maung Bran's family is being asked by the local KIA to pay back for the substantial damages done to their mine is not confirmed yet at the time of this news report. Maung Bran is now in Myitkyinar hospital.
KIA has been using their deadly landmines extensively in the Pharkant jade mining area to drive out all the miners. They have laid landmines all over the land without warning to the local populace. After countless number of dead and wounded from the KIA landmines most of the rural populace ended up in the refugee camps all over Pharkant town.
And the pathological liar KIA has been blaming it all on Burma army. They love to use such big words like Genocide and Ethnic Cleansing while they have been doing genocide and ethnic cleansing of ethnic Burmese and Shans living peacefully for generations on their so-called ancestral land.


KIA ignores ASSK's demand to stop using Landmines
After her visit to Kachin State and extensive consultation with the Kachin people in last February just this year Daw Suu has requested the KIA to stop using their landmines, but KIA has completely ignored Daw Suu's demand and now, believe it or not, they are seriously condemning Daw Suu for being silence on the Kachin issue.

A classic example of the pot calling the kettle black. Daw Suu will start talking about the Kachin issue, I reckon, once KIA start listening to her with respect she well deserved!