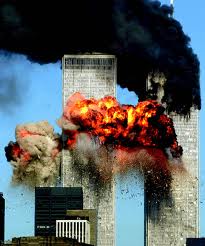 Instead of using traditional weapons like guns or swords the Islamic terrorists sent by now-truly-dead-bastard Osama Bin Laden used modern jet planes laden with tons and tons of flammable jet-fuel and hundreds of more innocent peoples.

But All the Muslims I met since then sympathetically (and truly disgusting for me) said the Americans have brought it upon themselves. Including the famous Aboriginal-Australian boxer Anthony Mundine who was just a recent Muslim convert.


This was what he said in October 2001: "They call it an act of terrorism, but if you can understand religion, and our way of life, it's not about terrorism. It's about fighting for God's law, and America's brought it upon themselves."

And it costs him a lucrative professional boxing career in the States. Any American with right mind would never let a 9-11 fuckwit like him or anyone else into their country let alone make money out of USA.

That late night in Sydney when I first saw the jet planes flying into the twin towers I could not believe my eyes that the unthinkable wholesale slaughter of innocent civilians was happening and being telecasted live on the TV in our lounge room. 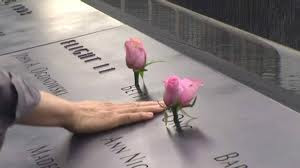 May Their Souls Rest In Peace, I pray for the victims on the eve of the eleventh anniversary of that infamy now widely known as the 9-11 Islamic Terrorist Attack on the New York World Trade Centre.

Following is the prayers like 9-11 anniversary statement released by the American Jewish Committee.
"Eleven years ago, our city and nation suffered monstrous acts of terrorism. We were attacked by radical Islamist forces not for a specific policy, but for who we are -- an open, democratic, pluralistic society.
We remember the cherished lives of the nearly 3,000 people who were murdered on that fateful day, a day seared into our memory forever.
We can only begin to imagine the enduring pain -- and irretrievable loss -- of the families, friends, and colleagues of those who were slain.
And we recall the extraordinary courage of those who put their own lives on the line—and, in many cases, sacrificed their lives—so that others might live.
Painful memories will always remain, as they should, but remembrance stirs us to reflect on both the evil and, yes, the good that emerged on that tragic day and in its aftermath.
The good is rooted in the heart and soul of American society. Right after 9/11, as a country, we stood as one. We were all in this together—as proud, strong, determined Americans. We must never lose that sense of common destiny.
Memories and reflections of 9/11, and what has transpired since, inspire us to recommit to the core values that form the bedrock of the United States of America. We must never falter in the defense of human freedom and human dignity.
And never again should we underestimate our enemies or suffer from a failure of imagination. 9/11 was a sobering reminder that those who despise what we stand for—liberty, diversity, religious freedom, and women's equality—will stop at nothing in the name of their demented political and religious ideology.
We and our allies—the family of democratic countries and common values—must remain ever vigilant and ever united."
American Jewish Committee.
9-11 Massacre Footage from ABC