(Translation of articles from the MEG & KNG published in August & September 2012.)

Wai Aung Kaba was one of the biggest jade mines operating in Pharkant area the Jade Land of Kachin State in Northern Burma. It was a heavily mechanized operation producing tons and tons of high quality green jades every month.

On the front the company was owned and operated by a shadowy group of Wa and Kokant Shans but everyone in the industry knew the fact that UWSA (United Wa State Army) was the real owner of the company.

With their heavyweight financial and military muscles the UWSA has made a lucrative deal with the KIA (Kachin Independence Army) and extracting the valuable stones of jade from the Pharkant area for many decades now.

In allowing the UWSA to operate the highly-profitable jade-mine KIA not only took a cut of production the UWSA also had to pay KIA hefty protection money. And the mining operation seemed to be running smoothly till August 29 this year.

According to the company management at about 5:30 in the afternoon that day two truckloads of heavily-armed KIA men from the KIA Sixth Battalion drove into the mine compound and shot and killed every company employee they ran into.

They then placed explosives on every vehicle and mining equipment, Oil tanks and oil drums, and the on-site storage of explosives used in mining. The KIA men left and soon after when they reached the safe distance the mine compound was blown up and immediately reduced to just a giant pile of scattered metal pieces and dust and gravel. The massive explosion could be heard and seen from miles and miles away.

According to the Wai Aung Kaba jade mine the 65 backhoe excavators, 84 heavy-duty dump trucks, 5 truck-mounted core drills, 70 fuel tanks (each holding 6,000 gallons fuel and engine oil), and other assorted mining machineries worth altogether more than 100 million dollars was completely destroyed.

The worse was that the bloodthirsty KIA men had killed 140 Wa and Shan workers inside the mining compound.

KIA Lies about the Devastating Raid

The massive explosion that ripped through the compound belonging to the Wai Aung Kaba company near the Myauk Phyu jade mine reportedly caused what has been described as the single highest one day death toll for the government side during its 15-month Kachin offensive so far.

According to KIA sources the lethal blast was triggered by an initial smaller explosion planted by members of the Kachin resistance. When the first blast went off it caused the large stockpile of explosives used for mining which were stored at the site to explode shortly afterward, causing what was described as a huge explosion.

At least one soldier from the Kachin resistance reportedly died during the attack, it is unclear whether he was killed by the first blast or the second. The solider is said to be from a unit belonging to the local civilian militia controlled by the Kachin Independence Organization (KIO) called the Mungshawa Hpyen Hpung or People's Army.

KIO fighters say in the days leading up to the explosion more than 100 Burmese soldiers were able to get inside the compound by posing as employees of the mining firm. The KIA observed dozens of individuals dressed as miners entering the mine compound and then leaving again in military uniforms as they headed to fight in the front-lines, according to KIA sources.

Tar Wai is just a front man. Wai Aung Kaba was established by our Wa leaders and some Kokang leaders. Headquarters is in Tarchilate. Here in Pharkant only 3 or 4 mines are bigger than ours.

Our company owners became wealthy from the drugs like Heroin and Yaba. But they do look after our Wa homeland very well. Nothing strange here in Burma of setting up legitimate company like Wai Aung Kaba to launder the drug money.

And our Wa elders are very close to the generals in the government. They donate generously to the government projects like building the new capital Naypyidaw.Everyone in Burma knows how generous Tar Wai and his wife are when it comes to donations for various social projects. They spent so much money donating.

The fourth and most troublesome one was the money demanded at gunpoint by individual KIA officers and soldiers for their liquor, food, drugs, and whores. We couldn’t be late even one day in paying these hefty protection moneys.

But our Wa and Kokang elders were happy to pay them as long as the business is uninterrupted. Now they are totally pissed off by what KIA fuckwits had stupidly done to our mine on August 29. Fucking KIA cunts!

On that day more than 100 KIA men in two trucks came into our company compound from the direction of KIA Sixth Battalion at Kansea. Once they were inside our compound they shot and killed every one of our workers they ran into.

Then they laid their explosives and mines on the company vehicles, heavy mining equipment, fuel drums, fuel tanks, and the explosive storages. Not long after they left their explosives went off and those small explosions had triggered a massive explosion of our mining dynamites and all the fuel storages.

That explosion destroyed 65 backhoe-excavators, 84 heavy-duty dump trucks, 5 truck-mounted core-drills, all other mining machineries, and 70 fuel and engine oil storages (each holding 6,000 gallons of diesel and petrol fuel and engine oil). The same night the mother-fucking KIA blew up Shwe-gaung-gaung, another Pharkant jade-mine with tons of explosives.

Those KIA men knew very well that Wai Aung Kaba was UWSA property. But they deliberately blew it up.

One Wa leader who asked me not to mention his name bitterly said, “Where did they throw away the gentlemen agreement between us and them? These KIA motherfuckers took money from us, but still destroyed our business, they are like the mongrel-dogs that pissed the plate they just ate their food out of. Their destructive act was a deliberate challenge to us. Attacking Wai Aung Kaba is same as attacking the UWSA. They are digging their own bloody graves by deliberately attacking us.”

According to him the total lost was more than 100 million US dollars or about 7 to 8 hundred -million Chinese Yuan.

Actually KIA owes us UWSA a lot. We Wa have supplied most of their arms and ammunitions. Some they paid with cash, but many were obtained from us with credit or loans.

One Kokang elder who has had substantial number of shares in Wai Aung Kaba demanded, “KIA must pay back our heavy lost with substantial interest. We could forgive if they didn’t know the mine was ours. But their deliberate act does not deserve to be forgiven. How about the compensation for the lives of company employees they killed and for their families.

They are now giving us the porkies that their field troops did destroy our business without orders from above. As if bloody KIA leaders didn’t know what their troops on the field were doing.  Don’t they have military discipline? Don’t they have brains? Without brains how could they become the leaders of KIA.”

A senior UWSA commander also angrily told me, “We are now demanding from KIA a satisfactory resolution for their destructive act. Whatever excuse and apology they are giving us now will not satisfy us. They have to compensate us with serious money for all the deaths, destruction, and material losses.

I’ve asked our elders and leaders that we are to revenge for our workers brutally killed right before my eyes. If our leaders cannot protect us they shouldn’t be asking us to work for the UWSA.

One thing I want to ask KIA is why are they dragging us Wa and Kokangs into their conflict with the Burma Army? Or they just want to control the whole Jade mining business in Pharkant?

Anyway, we have decided to retaliate with military action is the most appropriate action and we are now finding ways just to do that. We will attack you KIA/KIO very soon! But we do not want to control Kachins and Kachin land. Once we wipe your KIA/KIO bastards we will transfer the Kachin land to the Burma army and the Union government.”

But the so-called reformist President Thein Sein has strictly ordered the army to abruptly stop the offensive and since then the army halting the winning offensive and sitting pathetic at defensive positions all over the Kachin State has been taking heavy casualties from the KIA’s guerrilla and landmine attacks.

Army high command was so frustrated VSG Min Aung Hlaing even removed Major General Zeyar Aung, the hapless Commander of Northern Command responsible for the whole Kachin State, and transferred him out to the civilian administration as the Minister for Railways.


It might be a practical joke, for Zeyar Aung could not even keep the daily Mandalay-Myitkyinar train running regularly and safely from frequent KIA mine attacks while he was the Kachin State Army Commander.

So the current development in Pharkant is a godsend for the Burmese army as the Wa and the Kokangs are free to attack KIA if they want as these strong and battle-hardened ethnic armies are technically not under the control of the Union Government of Burma.

(The last one of following 4 photos is graphic. You may stop reading further.) 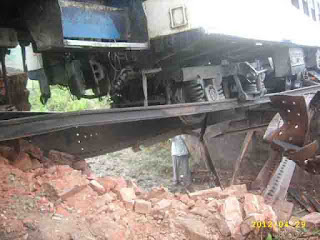 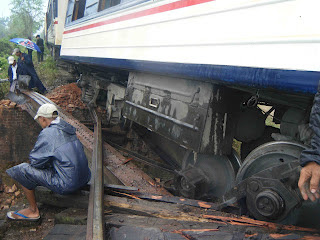