(Excerpts from the Chapter 11 “North Arakan and the Refounding of the Old Town 1944-1945” of Robert Mole’s book titled “The Temple Bells are Calling” a personal record of the last years of British rule in Burma, 1944-1948.) 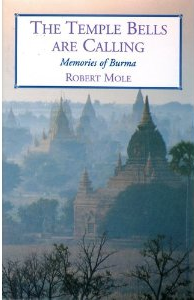 We travelled by road from Palasbari over the Khasi Hills, through the Assam capital of Shillong, and down again into the heat of the plains to Sylhet, where we boarded the train for Chittagong. We arrived the next day and spent the night in an army rest camp.
There was an office of the Civil Affairs supplies branch in Chittagong, which provided a truck to take us on to Bawli Bazaar, the headquarters of the Military Administration in North Arakanand some one hundred miles distant. We arrived in the late afternoon of the 30th April (1944).
The area which was at that time under British administration was a small portion of the extreme north of the Akyab District (official British title for the Arakan), consisting of little more than the two narrow and parallel valleys of the Pruma and Kalapanzin Rivers.
The Civil Affairs organization in North Arakan provided both territorial and formation CAOs (Civil Affairs Officers); there were no fewer than four divisions (British Indian Army) operating in the area, each with a CAO attached to it. Bawli Bazaar was a small village on the Pruma, which in peace time had been of absolutely no consequence.

The senior CAO was Apedaile, and there was a territorial CAO, Peter Murray, stationed over the hills to the east at Goppe Bazaar in the Kalapanzin valley. Peter had done his Burmese course with me at Oxford; after the outbreak of war he had joined the Burma Navy, and he continued to wear his naval badges of rank in the Civil Affairs Service, causing some confusion to military personnel.
As a result of the communal disturbances (the 1942 genocide of Buddhist Arakanese by Bengali Muslims that killed all the more than 100,000 Buddhists of Northern Arakan) which occurred in 1942 after the British evacuation from Arakan and to which I have referred before, the entire population of this area was now Muslim. They were Chittagonian by race and spoke a type of Bengali. Only a very few could speak Arakanese, a dialect form of Burmese, and we relied almost entirely on interpreters for communication with them.
One grew rather tired of seeing only Chittagonian civilians, wearing their little white Mohammedan caps, and with their shirts invariably hanging outside their longyis. They were not a people who could inspire much affection, but they had their good qualities, and I was told of Chittagonians who went unconcernedly about their work in the fields while fighting raged around them.
Across the Indian border there were settlements of Arakanese Buddhists, whose forebears had fled into British territory during the Burmese invasions of Arakan at the end of eighteenth century.  They spoke their own dialect of Burmese and dressed in the Burmese fashion, and it was something of a paradox that we in North Arakan should have to cross into India to see Burmese villagers and to hear Burmese spoken.
Though on the Arakan front nothing of military interest was happening, things were going very well for the Allied forces on the other two Burmese fronts. In northern Burma the area around Myitkyinar and Mogaung was recaptured by the combined action of Stilwell’s Chinese-American forces and the Chindits, while the Chinese had mounted an offensive from Yunnan to the east.
Mogaung was taken before the end of June; Myitkyinar was besieged for two and a half months, and fell at the beginning of August. On the Assam front the great Japanese offensive was halted by the middle of May, and on the 23rd June the road from Inphal to Kohima was cleared. Then began the pursuit of the Japanese by the troops of the 14th Army, which continued till the end of war; Tamu was reentered at the beginning of August.
Sitting in what seemed to me a foreign country, I hoped – but with little optimism – that someone might realise that I knew the Mogaung area well and that I might be posted there; or at least that I might be sent back to the Kabaw valley. But I spent the rest of the war in Arakan. 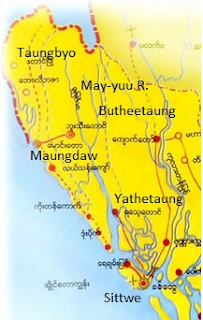 When John McTurk arrived back from leave towards the end of July, I went south to relieve George Merrells, who was CAO with 25th Indian Division. The divisional headquarters was at Maungdaw, some twenty miles south of Bawli, which in peace-time had been a township headquarters, but Merrells was living with an Engineer unit on Kappagaung, an island north of Maungdaw and joined to it by a bridge. We were here virtually on the shore of the Bay of Bengal, for Kappagaung and Maungdaw lay on the wide estuary of Naff River, the boundary between Burma and India.
My first task in Narigan was to dispose of the arrears of routine office work which had accumulated as a result of the preoccupation of the senior officers with establishing law and order. For example, all criminal cases tried by a subordinate magistrate had to be reviewed by the SCAO or his deputy.
This was very necessary, for some of the persons appointed to be magistrates in the Military Administration had never exercised magisterial powers before. I found that some three hundred cases tried since the beginning of the year only about 50 had been duly reviewed, and I set to work to dispose of the rest. I then turned to financial matters.
All civilian employees of the Civil Affairs Service were issued with what was known as a pay/pension book. These books were also to be issued to Burma Government servants and pensioners who had not been reemployed when they applied for arrears of pay or pension; thereafter they would come in monthly for payment.
But before any arrears could be paid – they were limited to three months in the first instance – and books issued, a board of inquiry appointed locally had to record a finding that the conduct of the applicants during the period of the enemy occupation had been fit and proper. This work was also in arrears.
Other routine office work consisted in arranging for the regular despatch of rations and stores to our outstations, periodically checking the cash balance in the treasury, and occasionally trying criminal cases.
The rains began soon after I left Myohaung. Our main centres could in any case be reached only by water, and we continued to pay them frequent visits.  John McTurk and I generally took it in turns to go on tour. 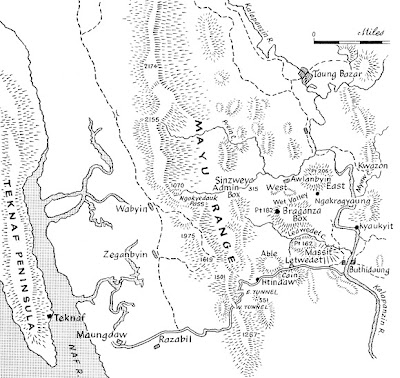 Once I went back to my old stamping-ground of 1944 – Bawli and Kappagaung – and found it greatly changed. In place of military camps and dusty roads there were now thriving villages and green paddy fields. The area was still completely Chittagonian, but the people had a pretty good idea that it could not be long before the Arakanese refugees were allowed back.
One of the Muslim Township Officers assured me, in the course of this tour, that a promise had been given in 1943 by one of our early Civil Affairs Officers that North Arakan would remain exclusively Muslim forever. Since, as I have explained, large parts had been predominantly Arakanese Buddhist before the war (and the 1942 Genocide), it was inconceivable to me that any such promise could have been given.
The claim smacked a little too much of Mr Mohammed Ali Jinnah, whose map of the future state of Pakistan was said to have included north Arakan. Before I left Arakan we were making preliminary plans for resettling the Arakanese in the north.
On my last tour I tried my first and last murder case. I had been invested with the powers of a special judge, which meant that I could try almost any case. A young Arakanese was accused of murdering his wife. He admitted doing so, and said that he had killed her because she had committed adultery with a Japanese soldier.
He gave his evidence in a perfectly straightforward manner and I expected it as true. I could do no other, as the law stood, than find him guilty of murder, for which there were but two penalties, death or transportation for life (which in practice meant imprisonment for twenty years). I sentenced him to the latter, but would gladly have given him a lesser sentence, had I been able to do so.
Meanwhile negotiations had been going on between our military leaders and Aung San about the future of the Burma National Army, now officially known as the Patriotic Burmese Forces. After much discussion and a good deal of misunderstanding, it was agreed that its personnel should proceed to centres where they would hand in their arms and be paid off and disbanded.
Those who wished could register for enlistment into the regular Burma army and would be accepted if they were found medically fit. Disbandment and registration began at the end of June, and continued for the rest of the year, by which time 8,324 members of the Patriotic Burmese Forces had passed through the centres, of whom 4,763 had applied for enrolment in the Burma Army.
Of the 3,500 who did not apply many appeared before long as members of the People’s Volunteer Organization (PVO), which I shall have occasion to mention in subsequent chapters. Some 14,000 weapons of all kinds were handed in, but I think no one was under any delusion but that a very large number had not been surrendered.