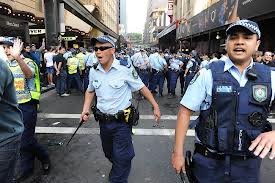 Violence erupted in central Sydney as hundreds of Muslims protest against a controversial film about the Prophet Mohammed. It is the latest in a series of demonstrations that have killed at least six people so far.
The wave of protests spread to Sydney's CBD yesterday afternoon, beginning outside the United States Consulate and spreading through the city's streets to Hyde Park. The ABC understands the protest was sparked by a mass text message saying: "We must defend the honour of our prophet, we must act now."

NSW Police Superintendent Mark Walton said the demonstration was unorganised and some protesters "came forearmed to cause damage". He said up to 150 police officers were called to the protest. Six officers were injured during the afternoon and two were taken to hospital for treatment. Superintendent Walton said the protesters left the demonstration by 6:00pm.
Here is how the story developed throughout the day.
6:28pm: In related news in the United States, a California man has been escorted to an interview with federal officers probing possible probation violations stemming from the making of the anti-Islam video that triggered violent protests in cities across the world.
A Los Angeles County Sheriff's spokesman said Nakoula Basseley Nakoula - who is linked to the film's production - voluntarily left his home, accompanied by sheriff's deputies, to meet with the officers in the Cerritos Sheriff's Station.
"He will be interviewed by federal probation officers," sheriff's spokesman Steve Whitmore said. "He was never put in handcuffs... it was all voluntary." But he said Mr Nakoula was not in custody.
6:20pm: Here is more of what NSW Police Superintendent Mark Walton told reporters in Sydney a short time ago:
6:15pm: New South Wales Police Minister Mike Gallacher has just spoken to . Here is some of what he had to say:
6:00pm: Police have defended their response to demonstrations in Sydney, part of a Muslim protest against a controversial film about the Prophet Mohammed.
In a press conference, Superintendent Mark Walton said eight people were arrested during the "unannounced protest". Up to 150 police officers attended the incident throughout the day. Six officers were injured, including two who were taken to hospital for treatment.
Two police vehicles were also damaged. Superintendent Walton said the protesters have now "self-dispersed" throughout the city. Police remain at the scene. 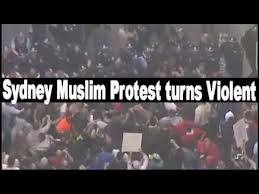 5:50pm: Sydney police are holding a press conference. A spokesman said up to 150 officers attended the protest and six officers were injured. Two have been treated in hospital. Watch live .
5.41pm: Here's a photo Josh Bavas took of the moment the protest turned violent:
5.15pm: Reporter Josh Bavas has been .
Muslims have been tweeting him to try and spread the word that not all agree with the actions of the protesters. "Josh, Please talk about this in your live crosses. Many Muslims are condemning violent actions of those protestors," tweeted
"Those people do not represent me! The violence is far more insulting then the movie itself."
5.12pm: Reporter Josh Bavas has talked to ABC News 24 about the moment the protest turned violent.
"Some people in their cars ... were trapped while the protesters were running past, with police quite close behind them," he said. "Because the protest spread out so quickly... police were scrambling to get together.
"I heard one man yell out 'shame on you' before the protesters [turned on him]. I don't know if he was injured."
5.10pm: Journalist Jamila Rizvi was shopping at the scene earlier today. She has told ABC News 24 it was much calmer earlier on.
She says the women and children who were present earlier have now gone, and believes a small minority has taken over the protest. She says it would be a shame if there was a backlash against the Muslim community in the wake of today's protest.
Please continue reading at this link.
Controversial Sam Becile's Innocence of Muslims (Part 5).
Muslim protests turn violent in Sydney (15 Sept 2012).

Related posts at following links.
Al Qaeda Kills US Embassador to Libya
Posted by Hla Oo at 11:39 AM