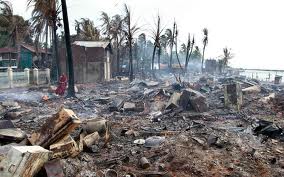 THOUSANDS of rioters have torched Buddhist temples and homes in southeastern Bangladesh in a rare attack against the community over a photo posted on Facebook deemed offensive to Islam.
Officials said the mob comprising some 25,000 people set fire today to at least five Buddhist temples and dozens of homes in Ramu town and its adjoining villages, about 350km from Dhaka. The rioters claimed the photo allegedly defaming the Koran was uploaded on Facebook by a Buddhist man from the area, district administrator Joinul Bari said.
"They became unruly and attacked Buddhist houses, torching and damaging their temples from midnight to Sunday morning," he told AFP. "At least 100 houses were damaged. We called in army and border guards to quell the violence."


The authorities had temporarily banned public gatherings in the area to prevent further clashes, Bari said. It was not immediately clear if there were any casualties, and authorities did not say if any of the rioters were arrested.
Buddhists, who make up less than one per cent of Bangladesh's 153 million population, are based mainly in southeastern districts, close to the border with Buddhist-majority Burma. Sectarian tensions have been running high since June, when deadly clashes erupted between Buddhists and Muslim Rohingya in Burma's western Rakhine state.
Although Bangladesh has witnessed deadly clashes between Muslims and Hindus in the past, sectarian clashes involving Buddhists are rare. In recent weeks tens of thousands of Muslims have hit the street across the country to protest a US-made anti-Islam film mocking the prophet Mohammed. 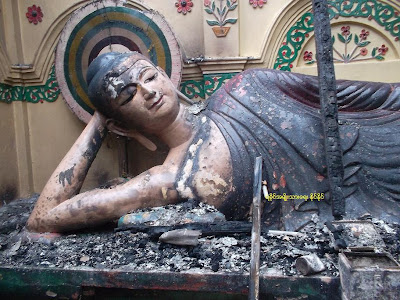 (This latest update is direct from The bdnews24.com on 1 October2012.)

Ramu/Cox's Bazar, Sep 30 (bdnews24.com)—The communal violence that ravaged a pre-dominantly Buddhist village in Cox's Bazar's Ramu Upazila was instigated by a religion-based political party, residents of the locality alleged.
They said the party played with local Rohingya refugees' rage against people of the Buddhist community after the recent sectarian violence between Muslims and Buddhists in northern Rakhine province in Myanmar.
Those who launched the attack chanted, "Naraye Takbir," the slogan Jamaat-e-Islami use in its political programmes.  According to locals, leaders of an Islamist party held a rally at 10pm on Sunday night alleging defamation of the Quran by posting a photograph on social networking website Facebook.
Those who addressed the rally claimed a Buddhist youth named Uttam Barua of Bouddha Parha posted the photograph on his Facebook account. The rally touched off a mayhem that lasted for five hours starting around 11:30pm. Seven Buddhist Viharas or monasteries, around 30 houses and shops were torched, and more than a hundred other houses and shops were also attacked, vandalised and looted.
District administration had to impose section 144, which bans public gathering, for an indefinite period on Sunday morning to rein in the unrest, followed by the commissioning of an inquiry into the incident. The incident shocked Prime Minister Sheikh Hasina, who is currently visiting New York, who ordered bringing attackers into book.
Buddhists and other ethnic and religious minorities were living in fear in Ramu and areas close by even though huge contingents of Police, Rapid Action Battalion, Border Guard Bangladesh and Army were deployed to contain the unrest.
Locals alleged the unrest turned catastrophic just because of 'negligence' by police and RAB officials in ensuring security to distressed people. Home Minister Mohiuddin Khan Alamgir, while visiting the area on Sunday, said the attacks were "planned."
"The attack was conducted in a coordinated manner. Temples and houses were set on fire using patrol and gun powder. It would have been impossible if the attacks were not planned," he revealed.
Resident Director of Sheema Rajban Vihara at Merongloa Parha in the Ramu, Progyananda Bhikkhu, shared his firsthand experience with bdnews24.com. He said at first a procession came and hurled brickbats at the houses in the area and vandalised boundary walls made of corrugated iron sheets.
"Around four to five hundred people chanting 'Naraye Takbir' entered our Parha (locality) as the night got darker. They set the temples on fire first," said Progyananda.  According to him, two donation boxes and a gold idol of Buddha were looted during the attack and at least 10 houses were set ablaze.
The Buddhist religious leader said it was the first time he encountered such violence and did not know how to respond. "The violence spread due to a reluctant administration. Had police and RAB members taken the early initiative, the whole incident would have been averted," he said.
General Secretary of a temple in the Vihara, Tarun Barua reported seeing people whom he had never before seen in his locality. "We have been living long alongside the Muslims. We did not even imagine that they could attack us. Such a big attack in reprisal of such a trivial incident was unbelievable," said Barua.
Residents of different areas including Mithachharhi and Shreekul had similar observations to make. Barua believes the anger of the Rohingya refugees living in Cox's Bazaar was fanned. "Jamaat-e-Islami may have instigated the unrest," he suggested.
Cox's Bazaar Jhilongja Union Parishad Chairman Gias Uddin Ziku said he found Jamaat-e-Islami activists gathering around different villages of minority people and he himself made them to leave and reported it to the police.
Ziku, also Office Secretary of Cox's Bazar district committee of Jatiyatabadi Chhatra Dal, heard the news of the attack minutes later. Ramu Upazila Parishad Chairman Sohel Sarowar Kajal thought the violence was carried out by hiring people from outside Ramu.
He also pointed the finger at the neglect of RAB and Police for the situation getting worse. "They reached the crime scene way later. Many damages could have been avoided if they had arrived as soon as violence broke out."
Cox's Bazaar district Superintendent of Police Selim Mohammed Jahangir declined comment on the matter. "Everybody is interpreting the incident to their liking. Members of the law-enforcing agencies including the police were deployed for containing the situation in the affected areas," said Jahangir.
Home Minister Alamgir and Industry Minister Dilip Barua visited the affected area on Sunday morning, promising financial assistance from the government in the rebuilding process. Alamgir ordered investigation into the allegation of negligence on the part of the law-enforcing agencies. Chittagong Divisional Commissioner Sirajul Hoque asked the five-strong probe body to report in ten days.
The incident left scores homeless out under open sky, more insecure than ever.  Four temples and 15 houses were burnt down in Shreekul Barua Parha. "We don't understand why life has undergone this change. They attacked us with machetes and hammers. We don't even know who they are," said Nikash Barua, a resident.
He said he heard the slogan 'Naraye Takbir' during the attack.  Cox's Bazaar district Ameer of Jamaat-e-Islami Md Shahjahan brushed aside the allegations of instigating the unrest.
"Causing damages to life and livelihood, or attacking religious institutions should not be the language of protests. Islam does not permit it either. Jamaat-e-Islami despises these acts," said Shahjahan. He, however, said instigators were those who want to turn the country into a 'militant' state.
The incident also left Muslims of the area shocked and grappling with the justification for the attack on Buddhists. "I don't understand why it all happened? We all live together," said Chhalim Ullah, a rickshaw-puller, as he visited the ravaged area.
Posted by Hla Oo at 12:42 PM