(This post is translation of Articles from the Eleven Media Group and Myanmah Ahlin.)

Nearly 530,000 acres of prime paddy land of Lower Burma are now under water while the whole upper Burma is experiencing the worst drought in history.
According to one senior official from the Nationwide Rice Growers Association the rain this Monsoon season has been falling non-stop heavily over most areas of Lower Burma while many areas in Upper Burma hasn’t seen a drop of rain at all. 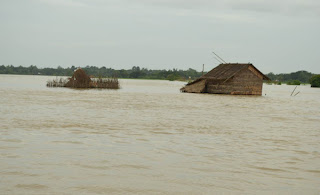 The worse floods are in the main rice-growing regions of Irrawaddy, Pegu, and Rangoon divisions. And the some areas in Mon, Karen, and Northern-Shan states.
On 17 August 2012 there were 528,000 acres under water. Out of all flood-covered areas 56,767 acres are lost forever and 136,000 acres can possibly recover from the flood damages while the rest is still under water.
Fifty-five townships in Lower Burma are underwater now and some have been underwater for more than twenty days. Since the paddy plants can normally remain underwater for only about 15 days all these flooded fields need to be replanted again.
Paddy Fields with No Water (Upper Burma) 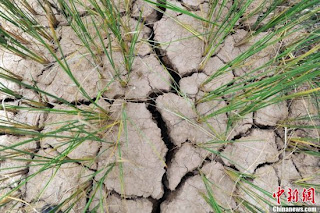 While Lower Burma has been under water the rice crop planted at the beginning of this Monsoon season in Mandalay and Sagaing divisions are slowly withering as the traditional mid-Monsoon rain hasn’t come down this year as it normally does reliably in the whole written history of Burma.
“We have already planted this season rice crops since the Monsoon rains came in, and we’ve been expecting the rain to continue as before. But the rain has now completely stopped and the plants are dying. Normally by this time we will have enough water in the fields for next crops and we could start ploughing. Without rain we can’t do a thing on our fields,” said bitterly one old farmer from the Sagaing Division facing the worst drought in many years.
Global Warming causing Crazy Monsoons?
Normally in Burma last 30 years the Monsoon rain had been falling regularly almost daily between one inch and three inches of rain per day average during Julys and Augusts the middle of the raining season.
That regular rain didn’t cause flood and at the same time provided enough water for rice growing. It is a beneficial rain for Burma and her people. But this year that Monsoon rain has changed for the worse.
Instead of raining the right amount every day the rain has been falling irregularly this year. Many days saw no rain and when it rained it came down in bucket loads from three inches to seven inches. This rain is causing flood and making it totally impossible to grow rice in many lowland areas as the paddy plants need right level of water in the fields. But the water levels in the streams and rivers are also rising and making it impossible to release the excess water from the fields into the waterways especially during the high tides.
Burma weather bureau’s findings from the recent catastrophic events in the country are indicating that the crazy monsoons in Burma are the direct result of weather changes worldwide due to the severe global warming.