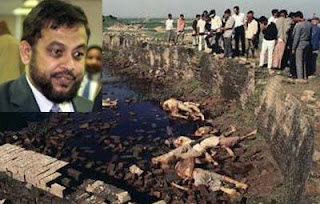 The Bangladeshi mass murderer at the heart of Britain’s Islamist establishment: In 1971, Chowdhury Mueen-Uddin abducted, tortured and murdered a number of Bangladeshi intellectuals and patriots, who were seeking self-determination and independence for Bangladesh. Following the failure of his campaign and Bangladesh’s independence, Mueen-Uddin then fled to Britain.

Here in UK Chowdhury Mueen-Uddin established himself as a pillar of the Bangladeshi British Muslim establishment, the prime mover of its Jamaat-e-Islami, directed Islamist politics, and – most shockingly – as the director of Muslim Spiritual Care Provision in the NHS and is also a chairman of the Multi-Faith Group for Healthcare Chaplaincy.

How did he manage it?

First of all, almost nobody challenged him: certainly not from within the National Health Service. After all, the men and women Mueen-Uddin murdered were just brown Muslims from a far away place.


Secondly, Mueen Uddin employed the services of Carter Ruck, the solicitors who make a speciality of helping foreign mass murderers from keeping their guilty secrets under wraps through the use of this country’s extreme libel law, aided by the cost that any trial involving flying witnesses over from Bangladesh would inevitably cost.

This is what happened when The Guardian tried to report on Mueen Uddin’s crimes.

Well, the game is now up. Bangladesh is now about to ask Britain to extradite Mueen Uddin. He won’t go: Bangladesh has the death penalty, and there are proper concerns about the functioning of the Bangladeshi justice process. However, the allegations are now fully in the open.

As a footnote, it is just not possible to overstate the importance of this man to Britain’s Jamaat-e-Islami nework. Mueen Uddin was the founder of the Islamic Forum Europe, Vice Chairman of the East London Mosque and London Muslim Centre, and indeed a trustee of the charity Muslim Aid.

He is the man who not only embedded Islamist politics at the heart of London’s Muslim community: he also made that politics respectable in the British political mainstream. Ministers, judges, Mayors, rabbis visit the East London Mosque and hobnob with his henchmen. The Citizens UK the London Citizens movement, which represents an important current within Labour and Left politics, regards both this institution and the Islamic Forum Europe is its partners.

Mueen Uddin was also one of the prime movers behind the Muslim Council of Britain. Even today, the organisation is run by the mass murdering fascist party, Jamaat e Islami. Farooq Murad, its Secretary General, is the son of Khurram Murad, the Vice Amir of Jamaat-e-Islami.

He headed a slate of Jamaat-e-Islami aligned candidates which emerged at the last moment to ensure that the non-Islamist candidate, Mohammed Amin failed to take the MCB from their clique. The fascist, blood soaked politics of this organisation doesn’t stop Labour front benchers sharing a platform with its representatives. 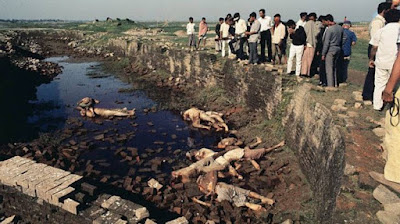 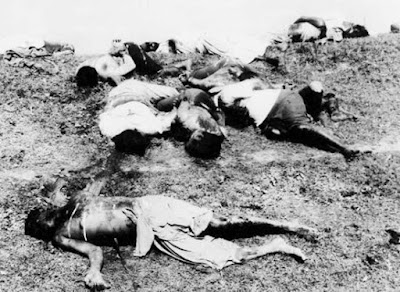 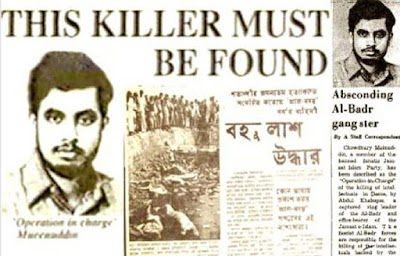 The Daily Mail has the story. Mueen Uddin’s libel lawyers appear to have failed to silence the allegations this time: but here they are just in case the man managed to get them taken down:

One of Britain’s most important Muslim leaders – who has a senior role in the NHS – is to be charged with 18 murders by a war crimes tribunal in his native Bangladesh, investigators have told The Mail on Sunday.

Chowdhury Mueen-Uddin, who is director of Muslim Spiritual Care Provision in the NHS and is also a chairman of the Multi-Faith Group for Healthcare Chaplaincy, is accused of abducting, torturing and killing 18 journalists, academics and doctors during the bloody war of independence in Bangladesh in 1971.

Sanaul Huq, the Inspector-General of Bangladesh’s national police force, who is co-ordinating the ICT investigation, said his investigators believe that Mr Mueen-Uddin killed dozens of people during the independence war, but they can link him only to 18 murders with evidence and eyewitness testimonies.

The ICT said Mr Mueen-Uddin and his associates allegedly subjected their victims to horrendous torture before killing them and dumping their bodies in sports grounds which earned the nickname ‘killing fields’. 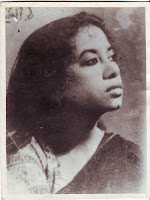 (Martyred journalist Selina Parvin’s son Sunday testified that alleged Al-Badr leader Chowdhury Mueen Uddin and his associates had abducted her mother from their residence on December 13, 1971.) 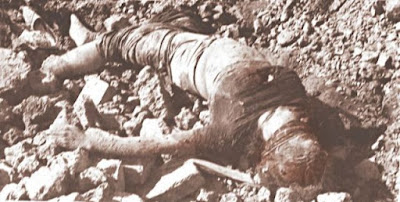 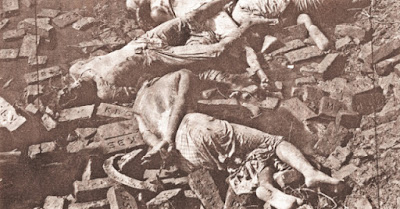 ‘These victims were chosen because they were leading figures in the independence movement. Mueen-Uddin was a leading figure when it comes to killing activists. This is why we want to try him in court.

‘As soon as charges are made – which I can guarantee will happen in days – we will request the British Government to hand him back to Bangladesh, and we will ask Interpol for his arrest. We will use all means, diplomatic and legal, to bring him back. If we fail, we will try him in absentia.’

After a nine-month civil war, during which hundreds of thousands were killed by the Pakistan military. At the time, Mr Mueen-Uddin was among those who did not want a secular Bangladesh splitting from the ‘Islamic state’ of Pakistan, say ICT investigators.

They say that during the civil war, Mr Mueen-Uddin was working as a journalist for a newspaper called the Daily Purbadesh in the capital Dhaka. But he was also said to be a secret member of an Islamic terrorist group called the Al-Badr Brigade, which abducted and killed leading figures of the independence movement for the Pakistani military.

Mr Huq says Mr Mueen-Uddin fled Bangladesh shortly after independence, and went to Britain via India, Nepal and then Pakistan, from where he caught a flight to London in the early Seventies. Over the decades, he became one of Britain’s most influential Muslim leaders, was instrumental in setting up the Muslim Council of Britain (MCB), and is now one of the trustees of the UK’s leading Islamic charity, Muslim Aid.

Mr Mueen-Uddin was one of the chief Islamic leaders who mobilised thousands of British Muslims to protest against the publication of Salman Rushdie’s controversial book, The Satanic Verses, in 1989. He led a group of Muslim leaders who went to Downing Street to hand a petition against publication of the book to Margaret Thatcher, who was Prime Minister at the time.

Mr Mueen-Uddin has also met Prince Charles, including one occasion when the heir to the throne visited the East London Mosque  in 2010. 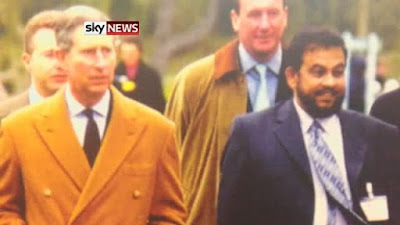 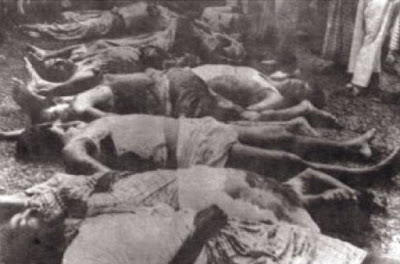 Investigators say that Mr Mueen-Uddin’s official title in Al Badr was ‘operation-in-charge’, which made him a commander of the group. He is accused of personally abducting six journalists – including a local BBC reporter – three doctors and nine academics from Dhaka University between December 10 and 15, 1971.

More than 1,000 Bangladeshi intellectuals and prominent supporters of the independence movement were killed in the dying days of the war by the Pakistani military in a calculated effort to deprive the new country of its leaders, says the ICT.

Mr Mueen-Uddin and his associates allegedly abducted their victims from their houses during the night at gunpoint, and took them to a gym called the Mohammedpur Training Centre in Mirpur, an area in north Dhaka. The gym was said to have been converted into a makeshift torture chamber. After the victims were tortured and killed, their bodies were dumped in nearby grounds. The bodies of some victims were never found.


The ICT has interviewed 45 witnesses. Among them is Asif Munier, who is now 46. He was four when his father, Munier Chowdhury, then 45, was taken away from their house in Dhaka. Mr Chowdhury was a prominent playwright and professor of Bengali literature at Dhaka University. He also wrote many articles in support of the independence movement. Mr Chowdhury’s body was never found although the family frantically searched the ‘killing fields’ to find the corpse.

Mr Munier said: ‘My father was no criminal. He was targeted and killed for his views to uphold Bengali language and nationalism, so I feel these people left me and my brothers fatherless, made my mother a widow and took away a gifted teacher and writer from Bangladesh, for no fault except believing in freedom and justice.

‘His trial would be a symbolic boost to the morale of Bangladesh. It is also a test for the international legal system and human rights mechanism, since Mueen-Uddin is a prominent UK citizen now. Me and my family will be happy to see Mueen-Uddin face trial.’

Mufazzal Haider Chaudhury, an academic in Bengali literature at Dhaka University, is also said to have been kidnapped by Mr Mueen-Uddin from his home and killed on December 14, 1971. His body was never found. His widow, Dolly Chaudhury, gave a video witness statement to the ICT before her death this year.


Opponents of the ICT say that the tribunal is being used as a tool for the political witch-hunt of Islamic leaders who are the fiercest opponent of the current government, the Awami League party.

The nine individuals who are on trial at the ICT are all leaders of Bangladesh’s most prominent Islamic political party, Jamat-I-islami, which opposes the Awami League and its ’secular’ politics, say critics. However, the ICT has broad support among Bangladeshi citizens, who want alleged war criminals tried, say human rights activists.

Sara Hossain, a British-trained barrister and one of Bangladesh’s most prominent human rights lawyers, said: ‘The critics often fail to mention the overwhelming demand for its [the ICT’s] establishment or the need for a process of accountability for 1971 war crimes and crimes against humanity.’

Any request by the Bangladeshi government to the UK to hand back Mr Mueen-Uddin is likely to be tricky because the two countries have no formal extradition treaty. Also, the UK usually does not send suspects to a country where there is a possibility that they may be sentenced to death. A further difficulty is that it is believed that Mr Mueen-Uddin has been granted British citizenship by the Home Office.

However, Mr Huq said: ‘We will try all avenues available to us. Although Bangladesh does practise the death penalty, it could be that Mueen-Uddin may not face it at his trial. That will be for the judges to decide.’


‘He has voluntarily stepped down from these roles while he responds to these allegations.’ 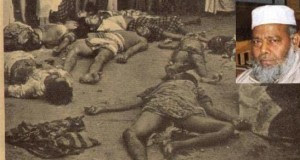 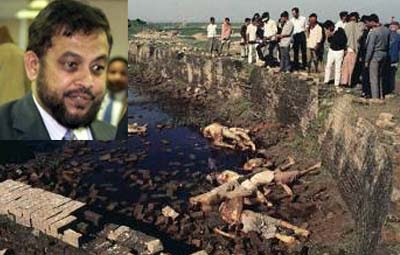