(Stephen Kitching’s article direct from The MIRROR UK on 19 December 2016.) 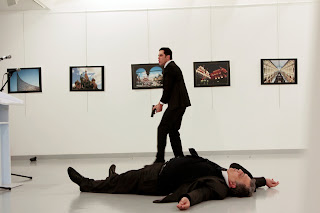 Russia's ambassador to Turkey has been shot dead in an 'assassination' - that was allegedly carried out in retaliation for the crisis in Aleppo. Before opening fire on Ambassador Andrei Karlov the gunman reportedly shouted in Turkish: "We die in Aleppo, you die here". Three others were injured in the attack during the ambassador's speech at an art gallery in the Turkish capital Ankara.

The attacker, a Turkish police officer named as Mevlüt Mert Altıntaş, fired a shot into the air as the ambassador spoke and then shot him multiple times. The 22-year-old gunman was killed during a shootout with police. Turkish Police later detained gunman's mother and sister after raiding the assassin’s home.


“He took out his gun and shot the ambassador from behind. We saw him lying on the floor and then we ran out,” said the witness, who asked not to be identified. People took refuge in adjoining rooms as the shooting continued. Mayor of Ankara, Melih Gokcek speaks to media in front of the Private Guven Hospital where Russian Ambassador to Turkey, Andrei Karlov hospitalized after Karlov has been shot.

US-based Muslim cleric 'had nothing to do with assassination'

US-based Muslim cleric Fethullah Gulen’s movement had no connection to the assassination of Russia’s ambassador to Turkey, and he strongly condemns the killing, according to an official who advises Gulen on media issues.

Allegations by an unnamed senior Turkish security official of “very strong signs” that the gunman who killed the ambassador belonged to Gulen’s network are “laughable” and intended to cover up for lax security, the adviser, Alp Aslandogan told Reuters. “Mr. Gulen categorically condemns this heinous act,” Aslandogan said.

The Turkish government has accused Gulen of instigating a failed coup in July. Gulen, who has lived in self-imposed exile in Pennsylvania since 1999, denies this. 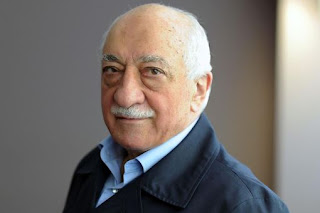 A senior security official in Turkey claims there are “very strong signs” that the assassin belonged to the network of US-based cleric Fethullah Gulen (Left). Turkey’s president accused Gulen, who is in self-imposed exile in the US, of orchestrating a failed coup last July. The unnamed official told Reuters that the current investigation was focused on the gunman’s links to Gulen’s network.

The government claims Gulen created a “parallel network” in the police, military, judiciary and civil service aimed at overthrowing the state. The cleric denies this.

Russia and Turkey have agreed to strengthen ties following the assassination of Ambassador Andrei Karlov. There will be a joint investigation involving Russian and Turkish authorities. Moscow and Ankara have long been strained over the conflict in Syria, with the two support opposing sides in the war. Russia backs Syrian President Bashar al-Assad, while Turkish President Recep Tayyip Erdogan is a staunch opponent of Assad. 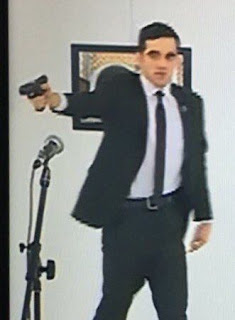 New details are emerging about the gunman, Mevlut Mert Altıntas, and the police operation following the ambassador’s murder. The attacker was fatally shot by a police special forces unit during a shootout that lasted around 15 minutes inside the art gallery, Turkey’s state-run Anadolu news agency reports. The 22-year-old gunman, meanwhile, had been a member of Ankara’s elite anti-riot police squad for two-and-a-half years.

Russian President Vladimir Putin has given a televised address following the assassination of the ambassador to Turkey. He called the ambassador’s murder a “provocation” aimed at undermining the “peace process” in Syria. He also spoke of the investigation underway to determine who, if anyone, gave orders to the gunman.

In his first public remarks, Turkish President Recep Tayyip Erdogan offered his condolences and said the attack was an attempt to hurt Turkey-Russia relations.

The White House has issued a statement on the death of Russian Ambassador Andrei Karlov. Here is the full text:

“The United States strongly condemns the assassination of the Russian Ambassador to Turkey, Andrei Karlov, in Ankara today, which reportedly also left others wounded. Our thoughts and prayers are with the families and loved ones of Ambassador Karlov and the other victims, and we offer our condolences to the Russian people and Government. The heinous attack on a member of the diplomatic corps is unacceptable, and we stand united with Russia and Turkey in our determination to confront terrorism in all of its forms.”

Turkey’s Interior Minister Süleyman Soylu says the gunman was a 22-year-old active duty police officer. The shooter, identified by Turkish media as Mevlüt Mert Altıntaş, was part of Ankara’s elite anti-riot squad. He was killed shortly after shooting the ambassador and three others.

He has been identified as Mevlüt Mert Altıntaş from Ankara. A local prosecutor in Ankara says Turkish authorities have raided the gunman’s home. The shooter was killed by police during a 15-minute shootout inside the art gallery.

US Embassy "on lockdown"

The US Embassy in Ankara is reportedly on lockdown following the assassination of the Russian ambassador. The locations are around 2.5 miles apart - but it’s understood that the US is reacting as a precautionary measure - rather than to any specific threat. The State department said: “All US citizens should avoid area near embassy compound until further notice”.

The Turkish President Recep Tayyip Erdoğan has phoned his Russian counterpart Vladimir Putin. Details of the phone call are being kept confidential for now - but the conversation is likely to have been frosty.

Russia earlier said it viewed the attack as a terrorist act and will raise the matter at a UN Security Council meeting - and that was before it emerged the gunman was allegedly a Turkish policeman.

"I will not leave here without dying"

More details of the killing are also emerging from eyewitnesses who were inside the art gallery when the Russian ambassador was shot. The gunman - who is being reported to be a serving Turkish policeman - is said to have come from behind unarmed Andrei Karlov to shoot him dead.

The attacker is said to have been heard by people fleeing to have claimed: “I will not leave here without dying” - before special forces rushed the building. 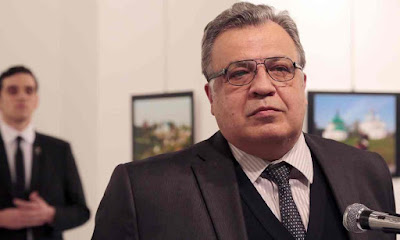 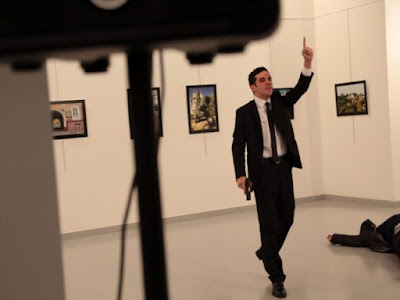 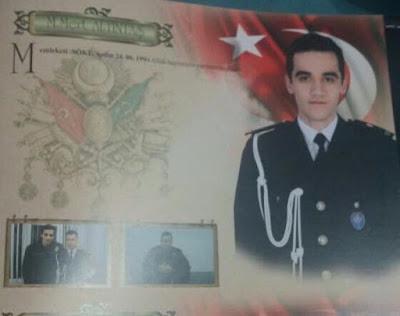 Details about the life of the assassinated Russian ambassador are now emerging in the hours after his death on duty. Andrei Karlov had spent 40 years serving his country. The career diplomat, who was fluent in Korean and English, first entered the diplomatic service in 1976 aged 22 after graduating from MGIMO - the Moscow State Institute of International Relations.

The student of international and economic relations went on to graduate from the Ministry of Internal Affairs diplomatic academy in 1992. He went on to become ambassador to North Korea from June 2001 to December 2006.

He spent two years as deputy director of the consular department of Russia’s Ministry for Internal Affairs, then served as its director from January 2009 to July 2013. He achieved the highest Russian diplomatic rank, Ambassador Extraordinary and Plenipotentiary, in 2011. He was then appointed to the role of ambassador to Turkey.

British Foreign Secretary Boris Johnson has condemned the “cowardly” assassination. He described as “despicable” the murder of Russia’s ambassador to Turkey Andrei Karlov in the art gallery shooting this afternoon. Mr Johnson has been a vocal critic of Russia’s actions in Aleppo.


The Mayor of Ankara says the attack was directed at ruining relations between Turkey and Russia. Russia is Syria’s most powerful ally and has played a significant role in the Syrian government’s attempts to eradicate rebel groups across the country. In recent weeks pro-government forces have made rapid advances on rebel-held territory in war-torn Aleppo, leaving many people dead or wounded. 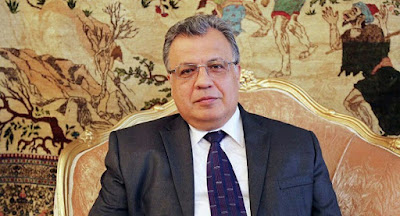 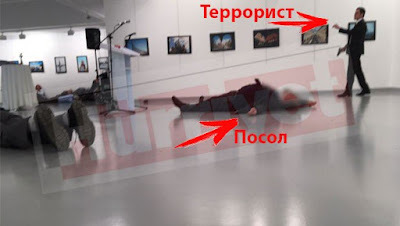 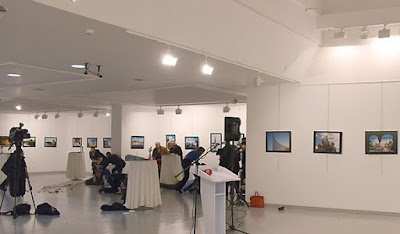 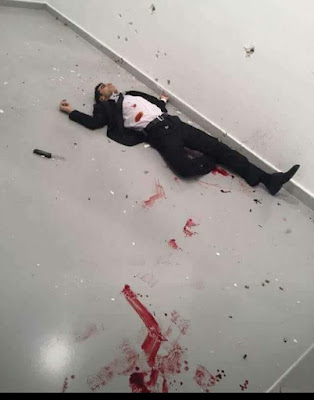