Is China Running Out Of Money?

(Russell Clark’s article direct from The HORSEMAN CAPITAL in November 2016.) 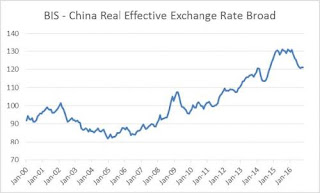 Since the global financial crisis, China has had a very strong currency, even with the recent devaluation of the Chinese Yuan. China has a managed exchange rate. The People’s Bank of China (PBOC) has had to step in to the exchange market to buy any USD coming into China.

To buy the USD coming into China, the PBOC has had to create CNY for this purpose. Typically, to soak up these new CNY, the PBOC has issued CNY bonds, as well as having very high reserve requirements on the banks to control the supply of CNY.

The PBOC is like any other bank, and it needs to match assets with liabilities. On the asset side, by far its biggest assets are foreign reserves. On the liability side are domestic deposits. For many years, foreign reserves were much larger than deposits, but now the gap is shrinking rapidly as foreign currency assets fall. 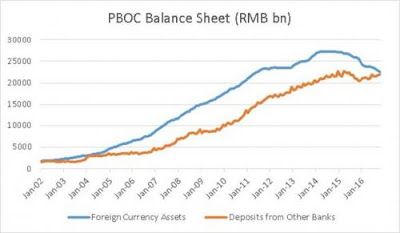 If Chinese foreign reserves continue to fall and the PBOC wants to maintain control of the exchange rate, they will need to face some difficult choices. First of all, it could raise interest rates to try and make the Yuan more attractive and reduce outflows. This however would be negative for growth, a priority of the Chinese Communist Party. 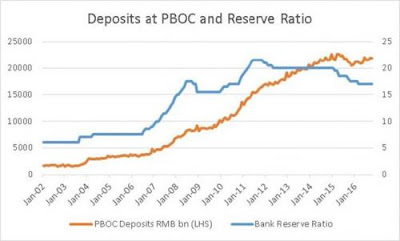 This leaves the PBOC with a dilemma. Raising rates will restrict growth but defend the currency, while cutting rates or reserve rates for banks will encourage more currency weakness.

One way to think about how high interest rates need to rise to stop a currency from falling is to look at how weak a currency has been over the last twelve months. You then compare this to the difference in 10 year bond rates, and the movement in the exchange rate over the last 12 months to get an idea of the interest rates increase needed to attract US dollars. 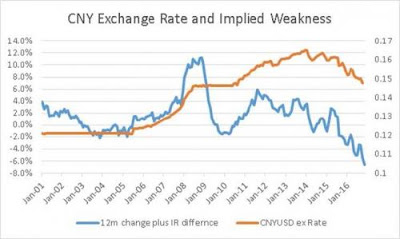 Given the large increase in rates needed to slow Chinese Yuan devaluation, devaluation must start to look like the more likely move. South Korea faced a very similar situation in 1997. In the mid-90s, Korean foreign reserves began to fall, like they are in China today. We have added Japanese foreign reserves to show that the fall in reserves was a Korean specific issue. 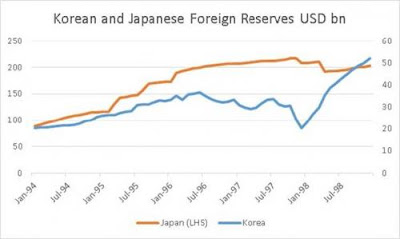 Like the Chinese Yuan, the Korean Won was a managed exchange rate that began to depreciate slowly then quickly. 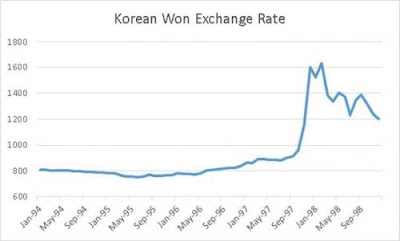 Below we produce the same graphs, but replace Korea with China. 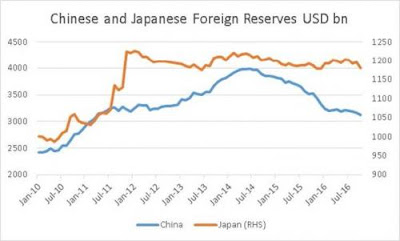 Given the huge increase in debt in China in recent years, such a rate increase seems very unlikely to me. Investors should be prepared for bigger falls in the Chinese Yuan.
Posted by Hla Oo at 2:13 AM