Trump Already Is More President Than Obama Is

(Staff article direct from The BREITBART NEWS on 09 December 2016.) 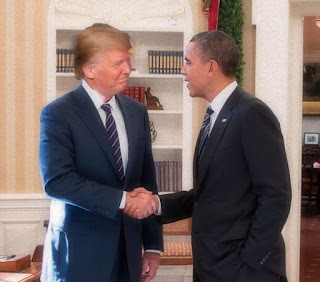 During that preview, he discussed Trump as president-elect, which he said he was acting as if he were already commander-in-chief. “I heard you on the other side of the break talking about the fact that I’ve been covering presidential transitions since Ronald Reagan in 1980. I have. And this is just as different,” Wallace said. “In fact we’ll call the program ‘The Trump Way’ because he is doing things differently than any president-elect I can remember. In a sense, he is almost more the president than the president is.

“We pay more attention when he speaks about China or what he is going to do about jobs or economic policy and saving jobs,” he continued. “It has more traction than when President Obama says things. So he is not waiting until the takes the oath of office on January 20. He is kind of the commander-in-chief already.”

NEW YORK (AP) — Donald Trump is partaking in one of the nation’s most storied football rivalries, saluting U.S. troops at the annual Army-Navy game on Saturday as he prepares to enter the White House.

The future commander in chief attended the 117th game between the military academies at West Point and Annapolis, which is being held on relatively neutral ground, in Baltimore, Maryland.

Trump tweeted on Saturday morning that he was going to the game “as a show of support for our Armed Forces.” He planned to spend the first half of the game in the box of David Urban, a West Point graduate and Republican adviser and the second half in the box of retired Marine Lt. Col. Oliver North, a graduate of Annapolis.

A Trump transition official said Trump would not formally switch sides at halftime in the traditional symbol of commander in chief neutrality because he is not the sitting president. The team member spoke on condition of anonymity to describe the president-elect’s plans. Trump is a 1964 graduate of the New York Military Academy near West Point.

Before the game, Trump met with Exxon Mobil CEO Rex Tillerson, a leading contender for secretary of state. Trump’s pick to lead the State Department is among his most significant decisions and the deliberations have become a source of tension within his transition team, with chief of staff Reince Priebus said to be backing Mitt Romney while other advisers oppose the idea of selecting the 2012 GOP nominee, given his fierce criticism of Trump during the campaign.

Tillerson, who has led Exxon Mobil since 2006, and also met Trump earlier in the week. In addition to Romney, Trump has also been considering Tennessee Sen. Bob Corker and John Bolton, the former U.S. ambassador to the United Nations. Trump announced Friday that Rudy Giuliani, the former New York mayor who was an early favorite, was no longer under consideration. 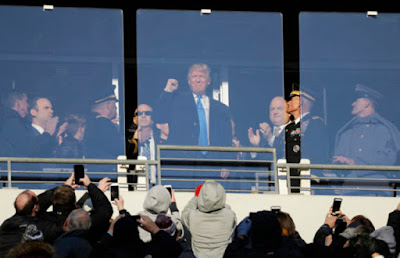 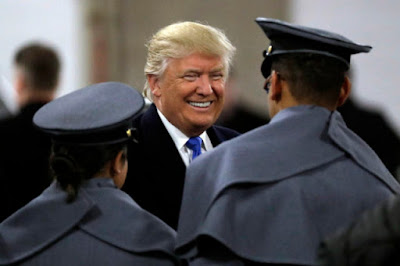 Trump’s appearance at the football game was capping off a week of rolling out Cabinet picks, holding “thank you” rallies in North Carolina, Iowa and Michigan, and trying to cement his incoming Senate majority with Saturday’s runoff election in Louisiana.

The incoming president appeared jovial and relaxed as he plunged back into electoral politics on Friday, a full month after he won the presidency. He held large-scale events in Louisiana and in Michigan, where he regaled supporters in Grand Rapids by reciting his victories in battleground states. Trump is the first Republican to win Michigan since George H.W. Bush in 1988. He attributed his feat to failures by Democrats.

In private, people close to Trump said he was expected to name yet another Goldman Sachs executive to his White House team. The president-elect’s National Economic Council is to be led by Gary Cohn, president and chief operating officer of the Wall Street bank, which Trump repeatedly complained during the election campaign would control Hillary Clinton if she won.

BALTIMORE (AP) — Donald Trump was greeted with cheers on his arrival at the annual Army-Navy game on Saturday, basking in the one of the nation’s most storied football rivalries as he prepares to enter the White House.

The future commander in chief, protected by panes of bulletproof glass, waved to the crowd and pumped his fist as he arrived during the first quarter of the 117th game between the military academies at West Point and Annapolis. The game, on a sunny but chilly day, was being held on relatively neutral ground, at M&T Bank Stadium in Baltimore.

Trump, in an interview with CBS Sports announcers Verne Lundquist and Gary Danielson, said he was “totally neutral” on the outcome of the game and quipped that he might make Lundquist, who was retiring from the play-by-play booth, his ambassador to Sweden.

“I just love the armed forces, love the folks. The spirit is so incredible. I mean, I don’t know if it’s necessarily the best football, but it’s very good. But boy do they have spirit,” Trump said. Navy has won 14 straight contests in the rivalry, but Army’s underdog Black Knights led at halftime, 14-0, hoping for an upset comparable to Trump’s unlikely victory in last month’s election over Hillary Clinton.

Trump spent the first half of the game in the box of David Urban, a West Point graduate and one of his Republican advisers in battleground Pennsylvania, and the second half in the box of retired Marine Lt. Col. Oliver North, a graduate of Annapolis.

Trump did not formally switch sides at halftime in the traditional symbol of commander in chief neutrality — which President Barack Obama did most recently during the 2011 game — because Trump is not the sitting president. The incoming president is a 1964 graduate of the New York Military Academy, a private prep school near West Point.

Trump’s appearance at the football game capped off a week of rolling out Cabinet picks, holding “thank you” rallies in North Carolina, Iowa and Michigan, and trying to cement his incoming Senate majority with Saturday’s runoff election in Louisiana. 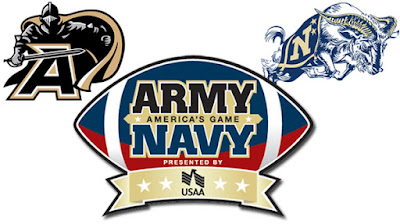 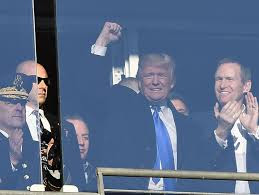 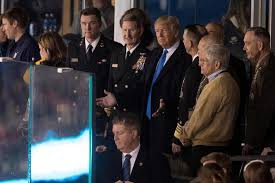 One of the organizers of the march, Charlie Kerr, [said] they began organizing the protest right after hearing Trump would be in town. They realized it wasn’t much time, but felt it would normalize the president-elect if they did nothing. “We thought it was important to show there are people who oppose him and don’t want him in our town,” Kerr said.

One of the groups, the Mid-Atlantic General Defense Committee, is reportedly using social media to organize and amass a crowd prior to Saturday afternoon’s matchup. Around a hundred protestors had gathered as of noon EST.

Baltimore was victim to massive protests in 2015 after the death of 25-year-old resident Freddie Gray. According to the Wikipedia page detailing the protests, 20 police officers were injured, at least 250 people were arrested, 285 to 350 businesses were damaged, 150 vehicles were torched, 60 structures were burned, 27 drugstores were looted, thousands of police and Maryland National Guard troops were deployed and the city declared a state of emergency.


This is the 117th meeting of the two teams, with Navy holding a decisive lead and winning the last 14 games. Kickoff is at 3 pm EST. 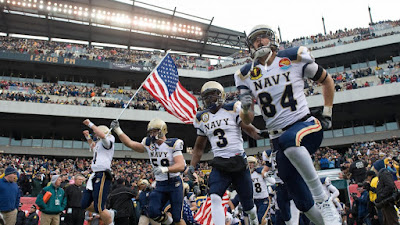 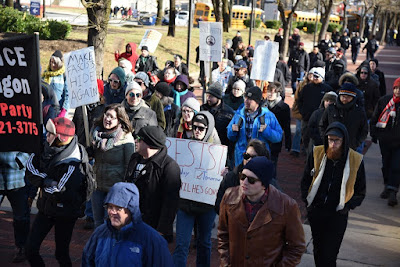