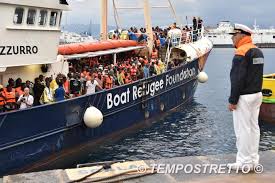 Caught in the act: NGOs deal in migrant smuggling: Ship-tracking software and reports from journalists prove that NGOs, the Italian Coast Guard, and people-smugglers coordinate their actions. The Automatic Identification System (AIS) exposes NGOs operating in Libyan territorial waters. Since the ouster of President Ghadafi, a growing number of Africans are smuggled into Europe for both political and profit purposes.

They travel via Libya from where they cross the Mediterranean. Different “humanitarian” organisations or NGOs involved are an indispensable part of the smuggle route to Europe. We noticed that the Italian coast guard, NGOs and locals coordinate their actions. Whatever they call it themselves, these operations cannot be classified as genuine rescue operations. The Dutch, Maltese and German based NGOs are part of the human smuggling network and one wonders, are these NGOs themselves criminal organisations.

Whatever the motives of these NGOs, their behaviour is illegal, and in countries governed by a constitution, i.e. European states, crime should be prosecuted regardless of the intention of its perpetrators. These NGOs get large sums of money from political operators like George Soros and also get a cut of money from the so-called rescued black Muslims through the human trafficking networks.

The North Sea trawler MS Golfo Azzurro was launched in 1987 as the Maarten Cornelis, and was the first trawler in the Netherlands equipped with the EUR sumwing. As the TX 33 Maarten Cornelis she was used to test the sumwing which caused less soil disturbance than traditional beam trawl because the wing hovers above the ground when fished. It also used less fuel than traditional trawling.

In 2010 the ship was leased by the Golfo Azzurro Foundation who partnered with the Sea Shepherd Conservation Society and, using funds from the Brigitte Bardot Foundation, used the ship for covert surveillance operations in the Danish Protectorate of the Faroe Islands.

On August 17 the ship was boarded and searched by the Danish Police and then let go under escort by the Royal Danish Navy. Denmark's Thetis class frigate Triton was assigned to monitor their actions.

In June 2016 the Golfo Azzurro has invited the 'Boat Refuge Foundation', a Dutch foundation, to go for a search & rescue for saving boat refugees in the Mediterranean Sea. The vessel is managed by Adrian J. Sonneveld, Captain and shipmanager.

The Search & Rescue operation is managed by the Italian Coastguard. Golfo Azzuro will be operated under the Panama Flag. The Boat Refuge Foundation will charter the vessel for a symbolic price. The board of the Goflo Azzuroo Foundation based in Rotterdam is fully motivated to go for this challenge. 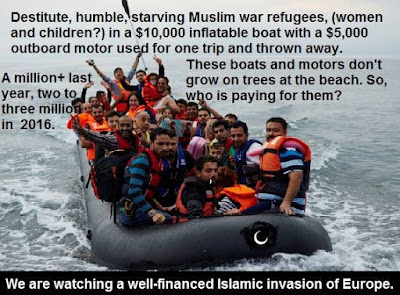 On the evening of 12 October at 21:15, 113 people were picked up 8.5 nautical miles off the Libyan Mellitah Complex, by four NGO ships; the Phoenix, the Astral, the Iuventa and the Golfo Azzurro. At that moment these four ships were within the territorial waters of Libya. During this transport, 17 persons were reported missing, including a three-year-old child. 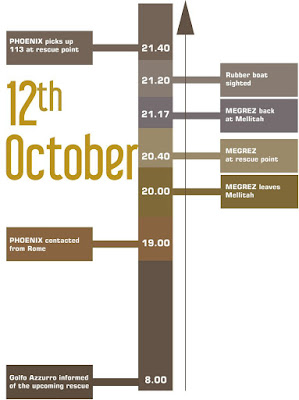 At 20:23 (UTC time 18:23) she posted a video where ‘Chief of the Mission’ Mateo told the crew something was coming. In her blog she wrote: “At eight o’clock in the morning we got the messages that there is a ship with problems 30 nautical miles away from us. The Italian coast guard asked assistance in the area. We were briefed by ‘Chief of the Mission’ Mateo. He told us that we should be prepared for guests.”(1)

The Italian coast guard did not only direct the Golfo Azzurro to the Libyan territorial waters but also the Phoenix, the Astral and the Iuventa. According to the Malta Today: “It was around 7 pm (12 October) when the Maritime Rescue Coordination Centre in Rome contacted Phoenix.

Still, it was only at 9.20pm that the rubber boat was sighted by – making use of the Schiebel drones on board the Phoenix. In cooperation with the other search-and-rescue NGOs in the area, a rescue operation was swiftly launched.”2) The Golfo Azzurro was told at 8.00 AM that there was a ship with problems while the Phoenix was contacted 10 to 11 hours later!

During the week that we monitored the area, four Italian tugboats, among them the Megrez, were stationed at the Mellitah Complex, and they were idle most of the time. While the Golfo Azzurro started its 30-mile trip to assist the boat 6 to 9 nautical miles off Mellitah, it took 10 hours before the Megrez, one of the four tug boats, left the port of Mellitah (20:00 pm) in the direction of the “rescue” point.

The Megrez sailed 6 nautical miles into the open sea, 2 nautical miles from the rescue point. Around 20:40 it reached its end point and without stopping it turned around and went back to Mellitah, where it arrived at 21:17. The whole trip including time, date and speed is recorded by the different AIS tracking websites.

The Megrez, an Italian registered tugboat, sailed in a straight line up and down without stopping and without participating in the “rescue” operation. It looks like the Megrez just dropped something in the open sea and immediately returned home. Forty minutes later after the Megrez turned around, perfectly timed, the Phoenix spotted a boat with migrants.

8.5 nautical miles off Mellitah, within Libyan territorial waters, the four ships, belonging to European NGOs, started their “rescue” mission and picked up 113 persons. The closest safe port is Zarzis in Tunis, about 65 nautical miles west from the “rescue” point. This port is frequently visited by the ships that operate for these NGOs.

Instead of bringing the migrants to Zarzis, the Phoenix brought the immigrants 275 nautical miles north to Italy. Of course, the 113 passengers paid 1000 to 1500 euro to be shipped to Europe and not to be transported to Tunis.

On the basis of our observation, it turned out that the Italian authorities knew in advance that there would be a “rescue” operation that night. They contacted the Golfo Azzurro in advance as the ship was more than 30 nautical miles off the Libyan coast. The captain knew that he was scheduled to pick up migrants, although there was not yet a distress signal.

At that moment the migrants were probably still in Libya. At 19:00 the Phoenix was warned by the coast guard and directed to the pick-up point. At 20:00 the Megrez left Libya. Two   nautical miles from the pick-up point, at 20:40 hours it turned around. Forty minutes later the Phoenix spotted the rubber boat. The whole operation was perfectly scheduled. (3) 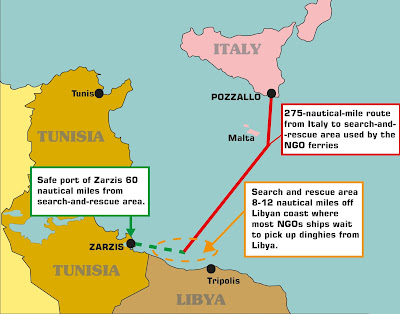 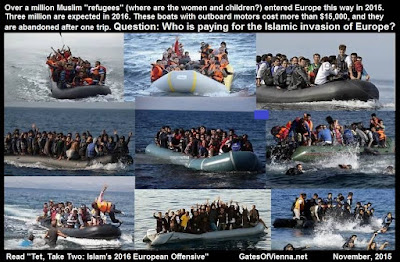