(Morshed Khan’s article direct from The DHAKA TRIBUNE on 06 December 2016.)

The Myanmar connection: Up to 45 large yaba (methamphetamine) pill manufacturers in Myanmar are pouring millions of pieces of the deadly drug into Bangladesh, generating an unstoppable smuggling ring where hundreds of crores of taka is changing hands, sources in Border Guards Bangladesh and Rohingya refugees said.

In the process, Myanmar security forces and also separatist groups fighting for independence in rebel-held areas in Myanmar’s Shan State are directly patronising the illicit trade of yaba pills. The extent of the smuggling is so deep rooted that it is now threatening to destroy the lives of millions of youths in Bangladesh, several official sources said.

Our investigation reveals, on one side security forces and on Bangladesh side influential politically backed individual Mafia figures from as far as Dhaka, Chittagong, Barisal and Khulna are controlling the immensely lucrative trade. In Teknaf and along the border with Myanmar, the trade has lured several hundred poor Bangladeshis as well as desperate Rohingya refugees, risking their lives regularly to do the courier job.


Yaba Route From Burma To Bangladesh

Many of these couriers have over the years, risen from abject poverty and misery to become some of the wealthiest men in this southwestern region. Along the road to Shah Porir Dwip from Teknaf, one cannot miss the newly built mansions and bungalows bearing the testimony of a highly lucrative yaba economy.

Stories of how a rickshaw-puller, a day-labourer, and ruling party thugs have amassed crores of taka, circulate openly in the tea stalls of Teknaf. Hundreds of latest posh Japanese cars have also flooded the roads of this rural town.

“The start of yaba trade across the border started only a few years back and with it, fates of many people in Bangladesh have changed,” said manager of a hotel in Teknaf, requesting anonymity. “In the smuggling and distribution network, blessings of influential political leaders are there, and everyone in the region knows it for a fact,” he added.

The yaba route goes back hundreds of kilometres away from Teknaf, in the eastern part of Myanmar borders with China, Thailand and Laos, top security officials working in the field for several years told this correspondent. In Shan, bordering Thailand and Laos, at least 45 yaba factories are operating.

While yaba has a huge demand in China, Thailand and Laos, most of the pills are manufactured in these 45 factories. China and Thailand remain the biggest markets for these illegal pills.

When it comes to Bangladesh from the factories the pills are first transported to nearly 1,000km away to Yangon. Then the pills, in brick-size packets, are often “escorted” to Sittwe, the capital of Rakhaine state, 890km away. Once in Sittwe, the drugs are stored in different places for transporting to Maungdaw, across Bangladesh. Here enter the couriers, in tatters and in phases. 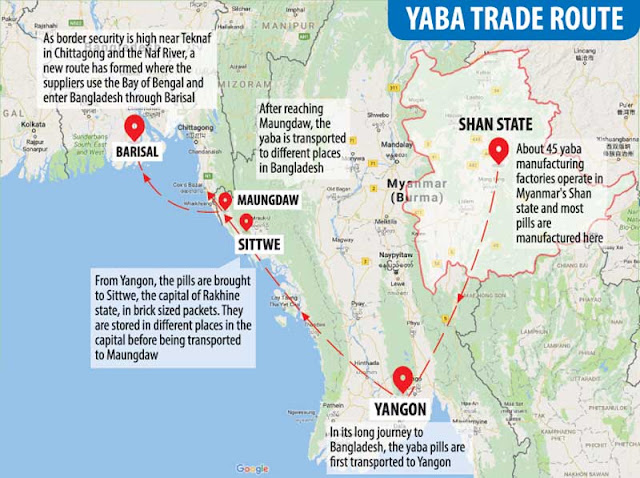 According to BGB sources, from January to November 27, 2016, BGB 2 Battalion alone seized 7,179,682 yaba pills. At Tk300 per piece (the government-decided value of each pill), the price of the total haul this year stands at over Tk200 crore. BGB sources said the price of each pill in retail markets in the big cities is more than double their calculation.

During the period BGB seizures interestingly peaked in November with 517,857,900 pills seized, when unrest broke out in the Rakhaine state, forcing thousands of Rohingyas to cross the border into  Bangladesh. It is also during this period beginning from early October, the BGB and other security forces stepped up vigilance along the border.

Interestingly, due to an embargo on Myanmar imposed by the International Chamber of Commerce, the formal border trade till today continues in dollars without requiring a Letter of Credit, although the ICC lifted the embargo in 2012. Yaba traders have cashed in with the loophole. In this case, over invoicing has been flourishing among the smugglers in collusion with some officials of the authorised banks to pay for yaba tablets and other narcotics through the safest channel, sources at Teknaf river port said.

“Nowadays because of the reinforced security on the river Naf to prevent Rohingya intrusion, yaba smuggling has taken to the Bay of Bengal to reach as far as Barisal in addition to Cox’s Bazar and other destinations directly,” said the BGB official, adding that recently Bangladesh Navy, Coast Guard, and Rapid Action Battalion separately intercepted several sea-going trawlers to seize millions of yaba pills.

At different refugee camps and slums, yaba is a rather well-known stimulant for a huge market in Bangladesh. A resident of Leda slum, Zahid is a rare Rohingya who had attended college back home. Zahid says for several years before crossing over, they all knew Myanmar security forces control manufacturing of yaba tablets. “Many poor Rohingyas were used by the Myanmar security forces to transport the drugs to Bangladesh, and many of them made good money working as transporters,” he said.

(Morshed Ali Khan is a veteran conflict zone journalist who is operating as a freelancer for the Dhaka Tribune.) 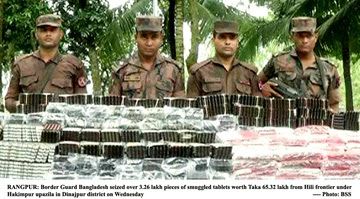 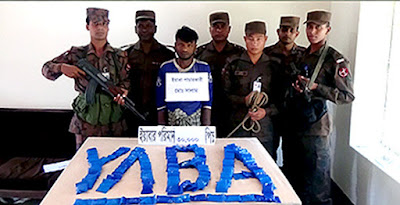 Another smuggler, Samir Ullah, 18, was captured during the incident, he said. A tip-off led the BGB to intensify patrols  near the river on Thursday. “A BGB team advanced towards a boat that stopped next to the river embankment. The smugglers opened fire and BGB retaliated,” said the BGB official.


BGB nabbed Samir and Darbesh after the others had fled. Darbesh was taken to the Cox’s Bazar Sadar Hospital with bullet wounds, where the doctors declared him dead. A total of 30,000 pieces of Yaba tablet and two machetes were found at the scene of the incident. 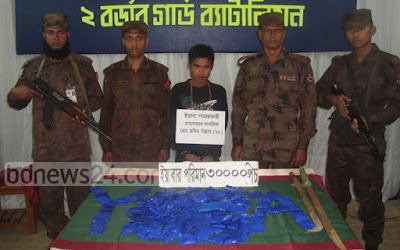 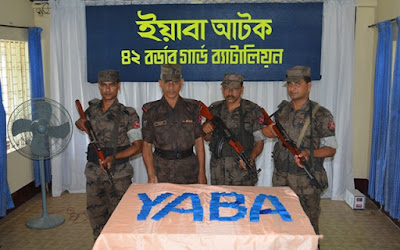 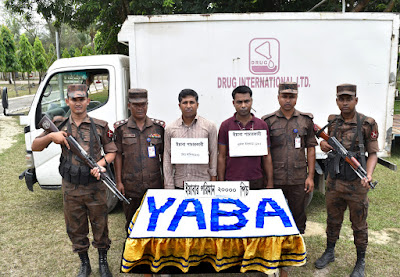 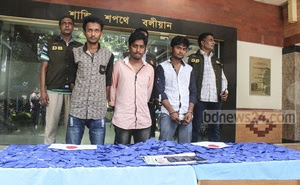 Myanmar police seized about 8 lakh (800, 000) pieces of intoxicated Yaba tablets at the sea port of Sittwe, Arakan State on June 27, 2016 evening. According to source, these intoxicated drugs were smuggled to Sittwe from Aungminglar, Yangon by the Yangon-Sittwe high way in a private bus.

On secret information, a group of police rushed to the Sittwe sea port and recovered the drugs while the smugglers were preparing to reach them to Buthidaung by a private steamer and at one stage two persons were arrested in connection with the seized drugs from Sittwe and another one from Buthidaung Township, said a police officer.

“The drugs seized were mentionable high in numbers in Arakan State to send to Bangladesh through Myanmar-Bangladesh border. This is considered to be the highest in numbers ever recovered in the State. Previously, we had never been able to seize such huge numbers of Yaba tablets. We could recover maximum 100-1000 pieces of Yaba tablets on daily basis earlier in the State.”


On the other hand, a youth was arrested along with about 400 pieces of intoxicated Yaba Tablets at Youkhanza road resort, Sittwe on the next day. 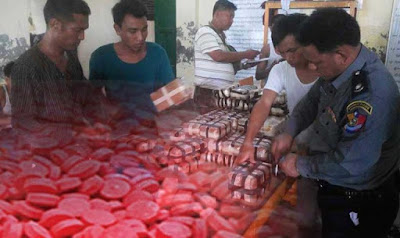 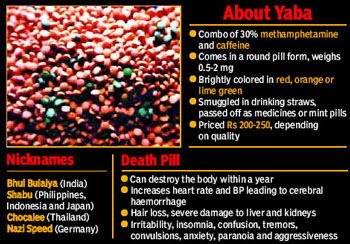 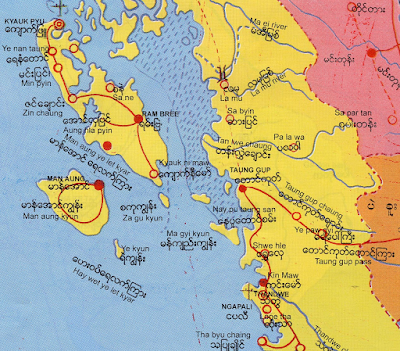