(Giulio Meotti’s article from The GATESTONE INSTITUTE on 02 December 2016.) 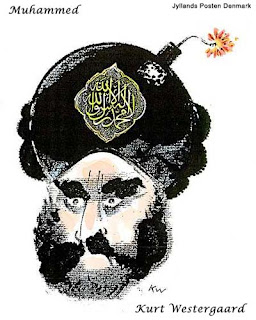 Self-Censorship: Free Society vs. Fear Society: Is democracy lost? Eleven years after the Danish Newspaper Jyllands-Posten published the Mohammed cartoons, the newspaper has a barbed-wire fence two meters high and one kilometer long. Kurt Westergaard, the illustrator who drew one of the cartoons (left), lives in hiding in a fortress, and Flemming Rose, the editor who commissioned the cartoons, has fled to the United States.

In the summer of 2005, the Danish artist Kåre Bluitgen, when he met a journalist from the Ritzaus Bureau news agency, said he was unable to find anyone willing to illustrate his book on Mohammed, the prophet of Islam. Three illustrators he contacted, Bluitgen said, were too scared. A few months later, Bluitgen reported that he had found someone willing to illustrate his book, but only on the condition of anonymity.

Like most Danish newspapers, Jyllands-Posten decided to publish an article about Bluitgen's case. To test the state of freedom of expression, Flemming Rose, Jyllands-Posten's cultural editor at the time, called twelve cartoonists, and offered them $160 each to draw a caricature of Mohammed. What then happened is a well-known, chilling story.


In the wave of Islamist violence against the cartoons, at least two hundred people were killed. Danish products vanished from shelves in Bahrain, Qatar, Yemen, Oman, the UAE and Lebanon. Masked gunmen stormed the offices of the European Union in Gaza and warned Danes and Norwegians to leave within 48 hours. In the Libyan city of Benghazi, protesters set fire to the Italian consulate. Political Islam understood what was being achieved and raised the stakes; the West did not.

An Islamic fatwa also forever changed Flemming Rose's life. In an Islamic caricature, his head was put on a pike. The Taliban offered a bounty to anyone who would kill him. Rose's office at the newspaper was repeatedly evacuated for bomb threats. And Rose's name and face entered ISIS's blacklist, along with that of the murdered editor of Charlie Hebdo, Stéphane Charbonnier.

Less known is the "white fatwa" that the journalistic class imposed on Rose. This brave Danish journalist reveals it in a recently published book, "De Besatte" ("The Obsessed"). "It is the story of how fear devours souls, friendships and the professional community," says Rose. The book reveals how his own newspaper forced Rose to surrender.

"The drama and the tragedy is that the only ones to win are the jihadists," Flemming Rose told the Danish newspaper Weekendavisen. The CEO of Jyllands-Posten, Jørgen Ejbøl, summoned Rose to his office, and asked, "You have grandchildren, do not you think about them?" The company that publishes his newspaper, JP/Politikens Hus, said: "It's not about Rose, but the safety of two thousand employees."

Jorn Mikkelsen, Rose's former director, and the newspaper's business heads, obliged him to sign a nine-point diktat, in which the Danish journalist accepted, among other demands, "not participating in radio and television programs", "not attending conferences", "not commenting on religious issues", "not writing about the Organization of the Islamic Conference" and "not commenting on the cartoons". 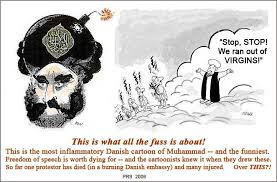 Rose signed this letter of surrender during the harshest time for the newspaper, when, in 2010-2011, there were countless attempts on his life by terrorists, and also attempts on the life of Kurt Westergaard, illustrator of a cartoon (Mohammed with a bomb in his turban) that was burned in public squares across the Arab world. Westergaard was then placed on "indefinite leave" by Jyllands-Posten "for security reasons."

Is democracy lost? Eleven years after Jyllands-Posten published the Mohammed cartoons, the newspaper has a barbed-wire fence two meters high and one kilometer long. Kurt Westergaard, the illustrator who drew one of the cartoons (left), lives in hiding in a fortress, and Flemming Rose (right), the editor who commissioned the cartoons, has fled to the United States.

In his book, Rose also reveals that two articles were censored by his newspaper, along with an outburst from the CEO of the company, Lars Munch: "You have to stop, you're obsessed, on the fourth floor there are people who ask 'can't he stop?'". Rose then drew more wrath from his managers when he agreed to participate in a conference with the equally targeted Dutch parliamentarian, Geert Wilders, who at this moment is on trial in the Netherlands for "hate speech." Rose writes:

He starts yelling at me, "Why the f*ck did you say yes to appear on stage with this terrorist target, are you stupid? Do you have a secret death wish? You have grandchildren now. Are you completely out of your mind? It's okay if you want to die yourself, but why are you taking the company though all this?"

Jyllands-Posten also pressured Rose when he decided to write a book about the cartoons, "Hymne til Friheden" ("Hymn to Freedom"). His editor told him that the newspaper would "curb the harmful effects" of the book by keeping its publication as low-key as possible. Rose was then threatened with dismissal if he did not cancel two debates for the tenth anniversary of the Mohammed cartoons (Rose, in fact, did not show up that day at a conference in Copenhagen).

After the 2015 massacre at Charlie Hebdo, Rose, no longer willing to abide by the "diktat" he was ordered to sign, resigned as the head of the foreign desk of Jyllands-Posten, and now works in the U.S. for the Cato Institute think-tank. The former editor of Jyllands-Posten, Carsten Juste, who was also blacklisted by ISIS, confirmed Rose's allegations. Rose writes in the conclusion of his book: "I'm not obsessed with anything. The fanatics are those who want to attack us, and the possessed are my former bosses at Jyllands-Posten."

Rose's revelations confirm another familiar story: Jyllands-Posten's surrender to fear. Since 2006, each time its editors and publishers were asked if they still would have published the drawings of Mohammed, the answer has always been "no." This response means that the editors had effectively tasked Rose with writing the newspaper for fanatics and terrorists thousands of kilometers away.

Even after the January 7, 2015 massacre at the weekly Charlie Hebdo in Paris, targeted precisely because it had republished the Danish cartoons, Jyllands-Posten announced that, out of fear, it would not republish the cartoons:

"We have lived with the fear of a terrorist attack for nine years, and yes, that is the explanation why we do not reprint the cartoons, whether it be our own or Charlie Hebdo's. We are also aware that we therefore bow to violence and intimidation."

A Danish comedian, Anders Matthesen, said that the newspaper and the cartoons were to blame for the Islamist violence -- the same official position as the entire European political and journalistic mainstream.

A year ago, for the 10th anniversary of the affair, instead of the cartoons, Jyllands-Posten came out with twelve white spaces. These white spaces represent what Rose, in his previous book, called "Tavshedens tiranni" ("The Tyranny of Silence"). Naser Khader, a liberal Muslim of Syrian origin who lives in Denmark, wrote:

"I do not blame them that they care about the safety of employees. I have bodyguards 24 hours a day. However, I believe that we must stand firm. If Flemming shuts his mouth, democracy will be lost."

Is democracy lost? The headquarters of Jyllands-Posten today has a barbed-wire fence two meters high and one kilometer long, a door with double lock (as in banks), and employees can only enter one at a time by typing in a personal code (a measure that did not protect Charlie Hebdo). Meanwhile, the former editor, Carsten Juste, has withdrawn from journalism; Kurt Westergaard lives in hiding in a fortress, and Flemming Rose, like Ayaan Hirsi Ali, fled to the United States.

Much, certainly, looks lost. "We are not living in a 'free society' anymore, but in a 'fear society'", Rose has said. 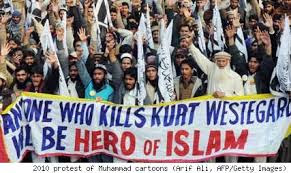 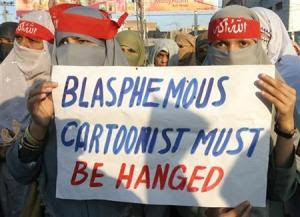 The initial story of the Muhammad Caricature Controversy

The controversy began in late September 2005 when the Danish author Kåre Bluitgen failed to find an illustrator for his children’s book The Qu’ran and the Life of the Prophet Muhammad. The Qu’ran strictly forbids the creation images of the Prophet.

Inspired by this, the Danish newspaper Jyllands-Posten challenged 40 Danish cartoonists to make a drawing of the Prophet Muhammad ‘as they saw him’. Twelve drawings were submitted and printed in the paper on 30 September.

The drawings caused an instant uproar in the Islamic world, and one drawing made by the cartoonist Kurt Westergaard showing Muhammad with a bomb in his turban, was viewed to be particularly offensive. Muslims all over the world initiated more or less violent demonstrations against the publishing of the images, which they interpreted to be an attack on their religion.

Ambassadors from 11 Muslim countries requested a meeting with the Danish Prime Minister, Anders Fogh Rasmussen, which was dismissed on the count that he was not responsible for the writings of Danish newspapers. Subsequently, several Muslim leaders from organisations in Denmark visited countries in the Middle East to make them aware of the drawings and encourage protests.

The Arab League condemned Denmark and more than twenty former Danish ambassadors criticised the Danish Prime Minister. Violent Muslim protests against the drawings caused the West to engage in a heated debate ith the Islamic world concerning press freedom and the right to free speech as opposed to respect towards religion.

Other media followed the example of the Danish newspaper and published the caricatures, among them several Norwegian and European newspapers and BBC. Some Muslims supported the publishing, on the grounds that they were not offensive, but intended a fair criticism against the Islamic policy. The Jordanian newspaper Al-Shihan printed the images, and the editor was promptly fired from his job and arrested by the police.


The demonstrations lasted for four months, but the Muslim anger towards Denmark, Jyllands-Posten and the cartoonists is still evident. On New Year’s Eve 2010 a 29-year-old Somali broke in to the house of Kurt Westergaard armed with an axe and intending to kill the retired cartoonist. In an interview Westergaard tol AP: “The drawing will follow me into my retirement home and later to my tomb.” 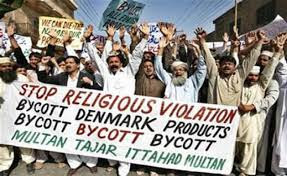 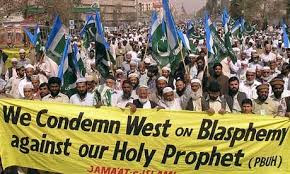