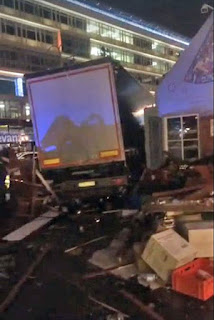 Pakistani 'Refugee' believed to have hijacked Polish lorry and killed the driver after police confirm man found dead in the cab of stolen Jihad truck was from Poland. Family members of the registered driver of the cargo truck that killed 12 when it careered into crowds at a Christmas market in Berlin fear he was kidnapped by the perpetrator and killed in the bloodbath.

Police confirmed today that the truck was stolen from a construction site before the Nice-style massacre and a man found dead in the Polish-registered truck was from Poland. Ariel Zielinski, the driver's cousin and owner of the haulage firm he was working for, said he last spoke to him at midday but his wife was unable to reach him at 4pm - hours before the tragedy.

He said 'hand on heart' that there was no chance his cousin had willingly taken part in what it is feared was an act of terror, after eyewitnesses claimed the driver deliberately drove into the crowds.

Nine were killed and 50 more injured when the truck careered through the busy square today in a massacre similar to the one in Nice that left 86 dead in July. The Scania-made lorry is owned by company Arial Zurawski, which is based in Gryfino in northwest Poland (pictured from the company website).


Police have now confirmed that the person found dead in the cab at the scene was a Polish national, but have not formally identified him, and it is claimed a man arrested nearby was a refugee. News of nationality of the dead man in the truck has fueled Mt Zielinski's fears that the 25-tonne truck, laden with steel was hijacked and with no headlights, was hijacked on its way back to Poland.

Mr Zielinski, whose company is based in Gryfino in northwest Poland, told local news channel TVN24 today: 'We haven't heard from him since this afternoon. We don't know what happened to him. 'I can say hand on heart that the man who drove into those people in the centre of Berlin was not my driver. 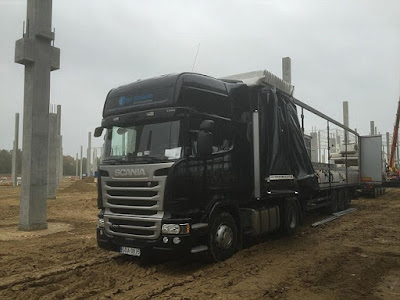 The haulage firm's owner had previously described how the driver's wife had been unable to contact him at around 4pm - hours before the bloodbath - and no-one had spoken to him since midday. He added: 'The truck was coming back from Italy and was in Berlin to unload his cargo in the morning.

'I spoke to him around noon and everything was ok. His wife then tried to call him at about 4pm but there was no answer. She couldn't get hold of him.' Mr Zielinski is now being questioned by Polish police, according to local media. The driver's cousin says he was only making a quick drop-off in Berlin and would never hurt anyone, denying the possibility he was motivated by terrorism in an interview on Polish radio.

The vehicle mounted the pavement before speeding through a crowd of shoppers on Breitscheidplatz Square, outside the Kaiser Wilhelm Memorial Church, a busy shopping area in west Berlin. The usually merry streets became scenes of chaos, with people being pulled fromm under the flattened wooden stalls and others ferried off in ambulances, some tragically under white sheets.

It came after repeated warnings from various security agencies that ISIS planned to wreak havoc on European countries during the festive season, specifically threatening Christmas markets. The vehicle left a trail of devastation in its wake, in a chilling echo of the deadly terror attack in the French city of Nice in July - and comes just one hour after the Russian ambassador was shot dead in Ankara.

The Muslim driver, who according to German newspaper Die Welt, was a refugee of Afghan or Pakistani heritage who had arrived in Germany in February, ripped off a mask as he was arrested. He is now being held in a police station under armed guard and officers remain at the scene, which was quickly cleared by 130 rescue workers.

Police used Twitter to urge locals to stay in their homes and 'check suspicious objects' and encouraged people to use a Facebook safety check loved ones were safe. German Chancellor Angela Merkel says she is 'mourning the dead', while The White House said: 'The United States condemns in the strongest terms what appears to have been a terrorist attack on a Christmas Market in Berlin, Germany, which has killed and wounded dozens.' 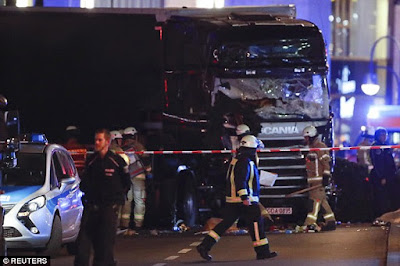 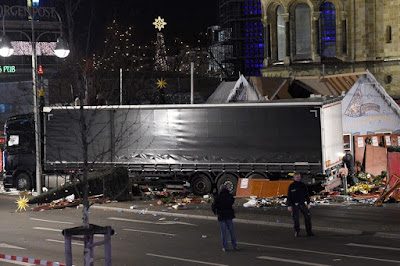 The attack is likely to fuel political tensions in Germany, where Merkel's open door policy to Syrian migrants has led to more than a million entering the country over the last 18 months. It has sent her approval ratings plummeting, particularly after terror attacks in Germany earlier this year, which led several high-profile political allies to publicly turn against her.

Germany has not experienced any mass-casualty attacks by Islamic extremists, but has been increasingly wary since two attacks by asylum-seekers in the summer that were claimed by the Islamic State group. Five people were wounded in an ax rampage on a train near Wuerzburg and 15 in a bombing outside a bar in Ansbach, both in the southern state of Bavaria. Both attackers were killed.

Mike Fox, a tourist from Birmingham, said 'it was definitely deliberate' as he explained how the large truck missed him by about three meters as it drove into the market, tearing through tables and wooden stands. Mr Fox said he helped people who appeared to have broken limbs, and said others were trapped under Christmas stands.

British tourist Emma Rushton tweeted from the scene: 'Lorry just ploughed through Christmas market in #berlin.'There is no road nearby. People crushed. I am safe. I am safe'. She saw the lorry rush past her at speed and said it could not have been an accident.

She told Sky News she only missed being caught in the chaos because she had climbed up some steps to take a seat. Ms Rushton said: 'The stall that we bought our mulled wine from was completely crushed. People were tearing off wooden panels to get out.' 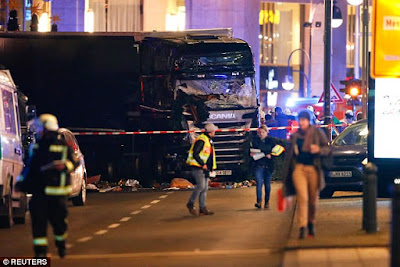 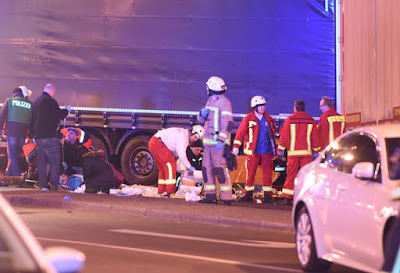 She added: 'It was not an accident. It was going 40mph, it was in the middle of the market. There was no way that it could have come off the road and it showed no signs of slowing down.'
'I heard a big noise and then I moved on the Christmas market and saw much chaos...many injured people,' Jan Hollitzer, deputy editor in chief of Berliner Morgenpost, told CNN. 'It was really traumatic.'

Richard Clarkson, from Brighton, told the Irish Independent he was at a bar called Irish Bar with his friends on the street near were the incident happened. One of his friends heard a bang. He said: 'I just walked out and I saw the truck, the windscreen was broken, I didn't see any bodies they were very quick to cover them up I think. The word terrorist is being thrown around a lot at the moment and people seem scared.' 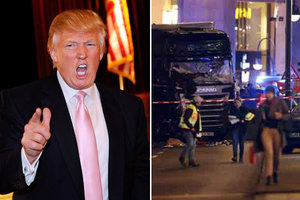 President-Elect Donald Trump has issued following statement after at least nine people were killed and 50 injured in a truck attack in Berlin, Germany.

“Our hearts and prayers are with the loved ones of the victims of today’s horrifying terror attack in Berlin. Innocent civilians were murdered in the streets as they prepared to celebrate the Christmas holiday.

ISIS and all other Islamic terrorists continuously slaughter Christians in their communities and places of worship as part of their global jihad.


These terrorists and their regional and worldwide networks must be eradicated from the face of the earth, a mission we will carry out with all freedom-loving partners.”
Posted by Hla Oo at 12:07 AM