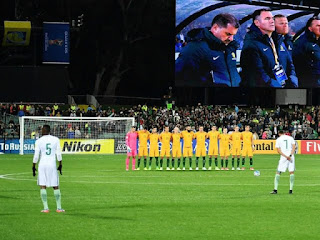 Outrage as Saudi Soccer Team Refuse to Stand in Silence for London Attack Victims: The Saudi Arabian football (soccer) team has refused to line up and respect a silence held to remember the victims of the London Bridge attack, claiming “it is not in keeping with our culture”.

The team was preparing to play Australia on Thursday morning, and as two Australian women had died in the Islamist attack last weekend, there was a minute’s silence planned in their honour. As it began, Saudi players stood in their playing position, instead of lining up, and those on the bench remained seated, refusing to stand in respect.

Critics said the move was disrespectful and claimed it showed the Saudis could sympathise with the killers of non-Muslims. Other, however, said that Muslim respect the dead in their own way – by praying, giving to charity, and speak highly of the person – but rarely by observing a silence.


The World Cup qualifier match ended in a 3-2 victory for Australia. A spokesman for the Football Federation Australia told Daily Mail Australia he was informed before the match that the Saudi team would not take part.

‘The FFA sought agreement from the Asian Football Confederation and the Saudi national team to hold a minute’s silence in memory of those lost in Saturday night’s terror bombings in London and in particular the two Australian women,” the spokesman said.

“Both the AFC and the Saudi team agreed that the minute of silence could be held. The FFA was further advised by Saudi team officials that this tradition was not in keeping with Saudi culture and they would move to their side of the field and respect our custom whilst taking their own positions on the field. The local broadcaster, FOXSPORTS, was informed of this prior to the minute’s silence taking place.”

Around 85 to 95 per cent of Saudi Arabian citizens are Sunni Muslims, with 10 to 15 per cent practising Shia Islam. Christians are forbidden from worshipping publicly. Shia imam Sheikh Mohammad Tawhidi told the Mail the Saudi team’s decision not to participate was not about the practice being un-Islamic, but because the dead were non-Muslim. “[Muslims] regularly mourn over a person if a leader dies or if there is an attack of some kind,” he said.

“They did not stop for a moment of silence because according to Wahhabi Islam – which governs Saudi Arabia – it is not wrong or a sin for a Muslim to kill a non-Muslim. In their eyes, the attackers are martyrs who are going to paradise. If they stand for a minute of silence, they are against their Muslim brothers who fought for jihad and fought the ‘infidels’.

“He noted this may not be the personal view of every player within the team, but they would have been ‘ridiculed’ in Saudi Arabia had they commemorated the victims of the London terrorist attack.” 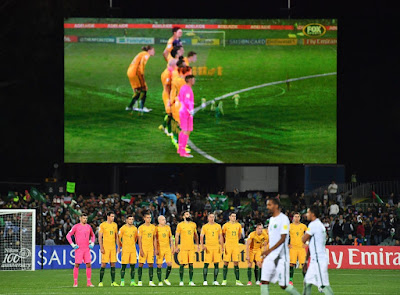 The Socceroos have addressed the Saudi Arabian football team's refusal to honour a minute's silence for the two Australian victims of the London terror attack.

The Saudi Arabian Football Federation has apologised for the behaviour of some of its players, who ignored the minute’s silence held before kickoff at the World Cup qualifier at Adelaide Oval last night.

Several of the Saudi players wandered away while the Socceroos observed the silent tribute in honour of two Australians killed in Saturday’s London terror attack. Some of the Saudi team continued jogging and passing the ball between each other during the tribute. One player stood facing the Australian team.

"The Saudi Arabian Football Federation deeply regrets and unreservedly apologises for any offence caused by the failure of some members of the representative team of the Kingdom of Saudi Arabia to formally observe the one minute's silence in memory of the victims of the London terrorist attack on 3 June 2017, prior to the World Cup Qualifying match against Australia in Adelaide," a holding statement by the federation reads.

"The players did not intend any disrespect to the memories of the victims or to cause upset to their families, friends or any individual affected by the atrocity. The Saudi Arabian Football Federation condemns all acts of terrorism and extremism and extends its sincerest condolences to the families of all victims and to the Government and people of the United Kingdom."

A Football Federation Australia spokesperson earlier told News Corp the Saudi team notified them they would not be honouring the tribute in advance of the pre-match ritual. "Both the Australian Football Confederation and the Saudi team agreed that the minute of silence could be held," it was quoted as saying.

"The FFA was further advised by Saudi team officials that this tradition was not in keeping with Saudi culture and they would move to their side of the field and respect our custom whilst taking their own positions on the field."

TODAY co-host Sylvia Jeffreys noted "I would be required to wear a headscarf if I were to travel to Saudi Arabia and they can't stand still for one minute to observe something that has no cultural, no religious background, no meaning in a faith or religious respect, it is simply honouring people who have lost their lives."

Labor MP Anthony Albanese told TODAY the display was disgraceful. "This isn't about culture, this is about a lack of respect," he said. Some users defended the team, saying a minute silence was not observed in Saudi culture, or Islam. The Socceroos went on to score a 3-2 win against Saudi Arabia, earning themselves a place in the upcoming World Cup.


Two Australian women were among the seven victims of the deadly weekend terror attack. Tributes have flowed for Brisbane 21-year-old Sara Zelenak, who had been working in London as an au pair, and South Australian nurse Kirsty Boden, 28. They have been remembered by friends and loved ones for the joy they brought to the lives of others. Two other Australians are recovering from injuries sustained in the attack. 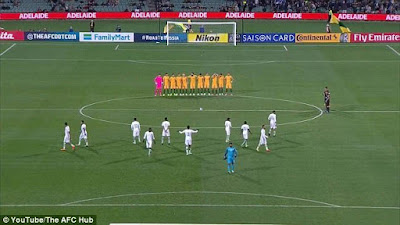