(Baron Bodissey’s articledirect from The GATES OF VIENNA on 11 June 2017.) 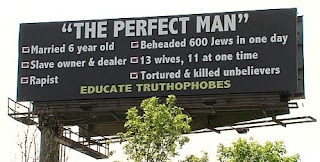 Last week two identical billboards appeared alongside highways in Indiana and Texas. Without mentioning Islam or Mohammed, they listed the characteristics of the “perfect man”, as shown in the photo above. Here’s the report from Breitbart:

Muslim Groups Unhappy With Indianapolis ‘Perfect Man’ Billboard: A billboard in Indianapolis, IN is stirring controversy among local Muslim groups, says a Fox 59 report. The billboard, seen going southbound I-465 near the Washington Street exit mocks the prophet Mohammed as “The Perfect Man.”

The billboard then lists six bullet points about Mohammed to describe him. The points include: “Married a 6-year-old,” “Slave owner & dealer,” “rapist,” “Beheaded 600 Jews in one day,” “13 wives, 11 at one time” and “Tortured & killed unbelievers.”

“I was a little disappointed when I saw that,” Farial Khatri of the Islamic Society of North America told Fox 59. “We do support free speech, but we do realize this is also rooted in bigotry,” Kahtri added. According to Fox 59, the Muslim Alliance of Indiana plans to raise money to put up its own billboard close by to spread a message of peace and kindness.


The whole kerfuffle reminded me of the uproar in the summer of 1968 over a song by Paul McCartney entitled “Why Don’t We Do It In The Road?” The punk kids of the time — I was one of them — gleefully pointed out that only someone with a dirty mind would have a problem with those lyrics. Matt Bracken reminded me of a similar trope from a few years later concerning a song by The Who called “Squeeze Box”.

So… If the description on those billboards is false and has nothing to do with Islam, how did Muslims know it was talking about Mohammed? The imam doth protest too much, methinks.

The owner of the billboards, a man named Don Woodsmall, sent a statement to the Indiana Star-Ledger. He explained that the client who paid for the advertisements wished to remain anonymous, but he (Mr. Woodsmall) had nevertheless done his own due diligence to establish the accuracy of the attributes of Mohammed as listed on the billboard:

A group of patriotic Americans approached me to rent the billboards after they were turned down by the national companies. This group couldn’t remain inactive any longer while little children were being blown up in Manchester and numerous other places around the world.

Their desire, born out of love and not hate, is to launch a national conversation on why it is only the Islamic religion that gets “hijacked” several thousand times a year resulting in the deaths of many innocents? However, my clients have requested anonymity. Why? Could it be the Islamic desire for death to anyone who insults their Prophet Mohammed?

Upon learning what they wanted to post, my first question was, like most Americans, “Is it true?” After talking to a half-dozen Islamic scholars and receiving and reviewing numerous citations from Islamic law and literature (scholars and citations all available upon request), I was convinced that each point listed on the billboard was historically and factually true.

I would encourage others to do their own research to verify the veracity of each and every point. Also, I will take down the billboards if any of the facts are shown to be untrue, as the scholars I contacted relied on the Koran, and the Hadith and Sira (the last two being collectively, the Sunna).

I realize that there are those who might be offended by the information conveyed, but truth does not and cannot equal hate no matter how much the facts may be disliked by some (as truth is factual reality while hate is an emotion).

I could not turn down a truthful ad designed to educate Americans on the true root cause of the fundamentalist and obedient (and specifically not “radical” when you are doing exactly what the core tenets of your ideology demand and your Perfect Man did and demanded followers to do) Islamic terror going on around the world; namely – the Manchester bombings, Coptic Christians being killed in Egypt, San Bernardino, Mumbai, the Orlando gay nightclub, the Boston Marathon, 9/11 and on and on and on.

It was and is my duty as a patriotic American to accept this Perfect Man advertisement designed to inform the American public of the true root cause of the cascading violence that is endemic to and systemic in Islam – a socio-political, totalitarian ideology with a small religious component.

It is interesting to note that while the billboards don’t mention Islam or Mohammed, the Muslim community knew exactly who it was referring to. The truth is a powerful weapon. Truthophobia (fear of the truth) is getting a lot of people killed. It is the hope and desire of those sponsoring this campaign that a national conversation/debate can be held in a civil and rational manner on the cause of this violent problem, so that it can be stopped and innocent lives can be saved. 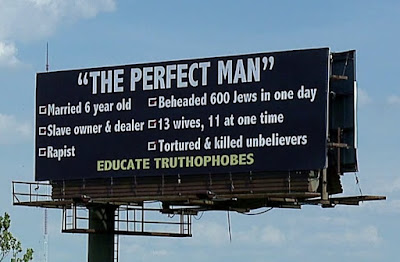 The Center for Security Policy has uploaded a table of citations to support the assertions on the “Perfect Man” billboards. The full text is below:

Citations for the Attributes of Mohammed ‘The Perfect Man”

a. Ibn Ishaq (Sira) — “Then the apostle sent Sa-d b. Zayd al-Ansari, brother of Abdu’l-Ashal with some of the captive women of Banu Qurayza to Najd and he sold them for horses and weapons.” (Ibn Ishaq/Hisham/Hisham 693)
b. Quran (33:50) — “O Prophet! surely We have made lawful to you your wives whom you have given their dowries, and those whom your right hand possesses out of those whom Allah has given to you as prisoners of war…
c. Quran (4:24) — “And all married women (are forbidden unto you) save those (captives) whom your right hands possess.”
d. Tabari IX:137 — “Allah granted Rayhana of the Qurayza to Muhammad as booty.”

a. Abu Dawud & Sahih Muslim — The Apostle of Allah (may peace be upon him) sent a military expedition to Awtas on the occasion of the battle of Hunain. They met their enemy and fought with them. They defeated them and took them captives. Some of the Companions of the Apostle of Allah (may peace be upon him) were reluctant to have intercourse with the female captives in the presence of their husbands who were unbelievers. So Allah, the Exalted, sent down the Qur’anic verse: (Sura 4:24) “And all married women (are forbidden) unto you save those (captives) whom your right hands possess.” (Abu Dawud 2150, also Muslim 3433)

b. Sahih Bukhari — “O Allah’s Apostle! We get female captives as our share of booty, and we are interested in their prices, what is your opinion about coitus interruptus?” The Prophet said, “Do you really do that? It is better for you not to do it. No soul that which Allah has destined to exist, but will surely come into existence.” (Bukhari 34:432)

c. Sahih Muslim — I drove them along until I brought them to Abu Bakr who bestowed that girl upon me as a prize. So we arrived in Medina. I had not yet disrobed her when the Messenger of Allah (may peace be upon him) met me in the street and said: “Give me that girl.” (Sahih Muslim 4345)

a. Sahih Bukhari — Narrated Qatada: Anas bin Malik said, “The Prophet used to visit all his wives in a round, during the day and night and they were eleven in number.” I asked Anas, “Had the Prophet the strength for it?” Anas replied, “We used to say that the Prophet was given the strength of thirty (men).” And Sa’id said on the authority of Qatada that Anas had told him about nine wives only (not eleven). Volume 1, Book 5, Number 268.

a. Al-Tabari — “When Muhammad saw Hamzah he said, ‘If Allah gives me victory over the Quraysh at any time, I shall mutilate thirty of their men!’ When the Muslims saw the rage of the Prophet they said, ‘By Allah, if we are victorious over them, we shall mutilate them in a way which no Arab has ever mutilated anybody.” (Al-Tabari, vol. 7, p. 133; cf. Ibn Ishaq 387)

b. Sahih Muslim — “Anas reported: Eight men of the tribe of ‘Ukl came to Allah’s Messenger (may peace be upon him) and swore allegiance to him on Islam, but found the climate of that land uncongenial to their health and thus they became sick, and they made complaint of that to Allah’s Messenger (may peace be upon him), and he said: Why don’t you go to (the fold) of our camels along with our shepherd, and make use of their milk and urine. They said: Yes. They set out and drank their (camels’) milk and urine and regained their health. They killed the shepherd and drove away the camels. This (news) reached Allah’s Messenger (may peace be upon him) and he sent them on their track and they were caught and brought to him (the Holy Prophet). He commanded about them, and (thus) their hands and feet were cut off and their eyes were gouged and then they were thrown in the sun, until they died.” (Sahih Muslim 4131)

c. Ibn Ishaq (from the Sira) — Muhammad, according to Islamic tradition, didn’t just justify torture. He ordered it: “Kinana b. al-Rabi’, who had the custody of the treasure of B. al-Nadir, was brought to the apostle who asked him about it. He denied that he knew where it was. A Jew came (T. was brought) to the apostle and said that he had seen Kinana going round a certain ruin every morning early. When the apostle said to Kinana, ‘Do you know that if we find you have it I shall kill you?’ he said Yes. The apostle gave orders that the ruin was to be excavated and some of the treasure was found. When he asked him about the rest he refused to produce it, so the apostle gave orders to al-Zubayr b. al-Awwam, ‘Torture him until you extract what he has,’ so he kindled a fire with flint and steel on his chest until he was nearly dead. Then the apostle delivered him to Muhammad b. Maslama and he struck off his head, in revenge for his brother Mahmud.” (Ibn Ishaq 515). 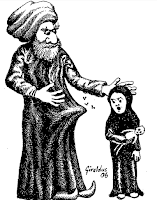 The prophet Muhammad ordered the beheading of more than 700 Jewish men in a single day during Banu Qurayza battle. They dug a huge grave, and started beheading all male members of the tribe who had reached puberty, the women and children were taken as slaves. Killing, Stoning, Chopping Hands, Lashing, Slavery and Beheading are rooted in Islam. Most of that still happen in Saudi Arabia till this day and age. Slavery ended in Saudi Arabia on 1962 because of pressure from Britain.

Entire cities were burnt down and the populations massacred during the Islamic conquest of India. It was normal for them to kill 100,000 in one day. Flagellation, Stoning, Killing, Slaughtering, Burning and Crucifixions was the norm. Thousands of temples were destroyed to make way for mosques. Millions of women were kidnapped, rapped and sold as slaves. Every new invader made his hills of Hindus skulls.  Millions of Hindus were converted to Islam by sword during this period. The conquest of Afghanistan in the year 1000 was followed by the annihilation of the Hindu population; the region is still called the Hindu Kush, i.e. Hindu slaughter.