UK Police’s “Run, Hide, Tell” Vs US Sheriff’s “Fight Back”

(AWR Hawkin’s article direct from The BREITBART NEWS on 09 June 2017.)

'Run, hide, tell': What to do in a terror attack. The London Metropolitan Police have issued a public warning to "run, hide tell" in the wake of multiple coordinated terror attacks at London landmarks on Saturday night.

Run - to a place of safety. If there is nowhere to go then
Hide - Turn your phone to silent and turn off vibrate. Barricade yourself in if you can
Tell - the police by calling 999 when it is safe to do so

What does happen to that Winston Churchill’s famous WW2 “We Shall Fight Them On The Beaches” speech? Are the British men becoming cowardly softened by the Political Correctness? Are they surrendering to the Islamists and Leftists by forgetting Churchill’s “We Shall Never Surrender” promise to his people?


Sheriff Wayne Ivey: “This Is War”, Armed Up & Fight Back

Florida’s Brevard County Sheriff Wayne Ivey is urging law-abiding Americans to arm up, get familiar with their firearm, and be ready to make terrorists worry about defending their own lives, for a change.

Ivey made these comments in a video he posted to Facebook in reaction to the horrendous attacks on unarmed, law-abiding Londoners. Looking at terror attacks around the world, Ivey observed:

Terrorists and active shooters are using every weapon available to target citizens. Guns, knives, trucks, hammers, and even explosives have all become the weapon of choice for murderers who only have one goal–killing innocent and law-abiding citizens.

It seems that almost everyday we hear of another attack taking place at a concert, tourist destination, church, business, or anywhere else in the world where they can strike fear in the hearts of citizens.

He urged Americans to take their safety seriously and to determine to be “the first line of defense” against a terror attack.  He stressed, “Let me be perfectly clear, doing nothing or just hoping it won’t happen to you is not going to save your life.”


Sheriff Ivey mentioned that officials in other parts of the world are teaching citizens that the best thing they can do is “run, hide, tell,” and he rejects that paradigm, citing the fact that “this is war” and you win a war by fighting — not by running away cowardly.

He points out that “terrorists and active shooters know that our citizens have been coached to run and hide, and then patiently await help.” He said attackers “count on” Americans to respond this way, then added, “What they don’t count on is being attacked themselves.” Ivey says it is time to be prepared to counterattack; to be armed and ready to make the terrorists fight to defend their own lives for a change, should they strike.


Ivey said: No matter who you are or what your position is on guns, there is no denying the fact that the only thing that stops a bad guy with a gun–or a knife–is an armed and well-prepared citizen or law enforcement officer. There is no doubt that as soon as 911 is called law enforcement is on the way, however, until they arrive it is up to you and those with you to neutralize or eliminate the threat. 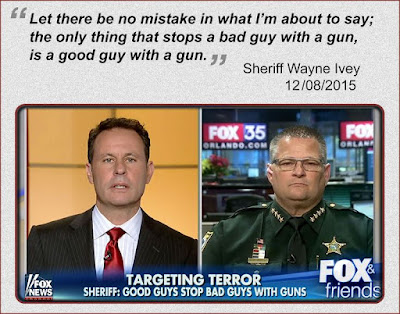